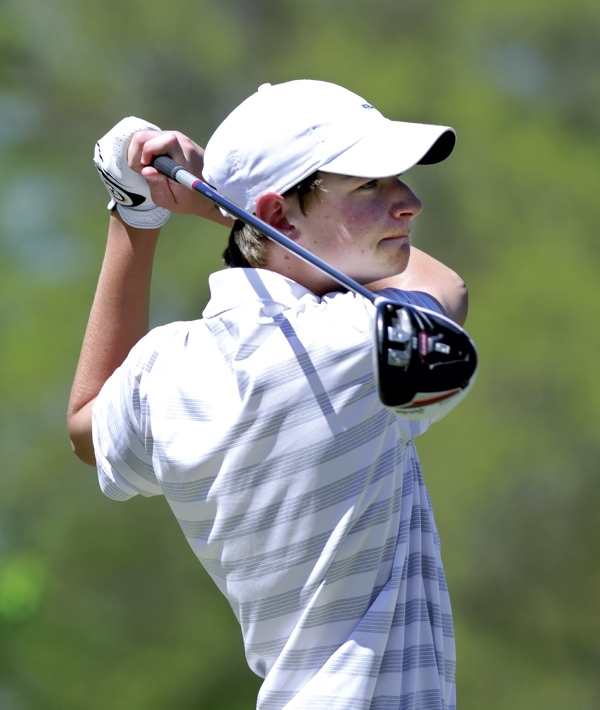 KRISTI CRAVEN/ SALISBURY POST Salisbury’s Alex Antosek tees off during Tuesday’s CCC Tournament at the Country Club of Salisbury. Antosek was co-medalist with a 76 and the Hornets finished second to West Davidson. But the Hornets did finish second for the second consecutive season, carding a 332 team score at the pristine Country Club of Salisbury.

“Second place, it’s what we expected,” coach Lucas Hatley said after Salisbury outplayed everyone but defending champion West Davidson (318). “We were second in all but one (regular-season) match this year, so it’s a comfortable second.”

Salisbury also placed second with 1,210 total strokes this spring, good enough to secure one of CCC’s three berths in the 2A Midwest Regional tournament on May 2. North Rowan (357) placed third in yesterday’s tournament and fourth in total strokes (1,312) — and qualified four individual golfers for the regional.

“We knew there was a big enough gap between third and fourth that we were not going to finish in the top three,” said Cavaliers’ coach Kelly Everhart. “It was out of reach before we even got here. ”

Salisbury at least had a shot, but needed a lights-out effort and didn’t get it. The Hornets were paced by co-medalist Alex Antosek, an all-conference junior who fired a 76 (37-39) on the par-71 course. He birdied the eighth and 10th holes and spent most of the match staying out of harm’s way.

“It was a consistent round more than anything,” said Antosek, who joined teammates Hank Robins and Simon Post on the All-CCC team. “I had a really good front nine and a couple of mishaps on the back. But I played the course smart and took what it gave me.”

Antosek used a terrific wedge shot to reach the green at No. 8, then sank a six-foot putt for birdie. On the par-4 10th hole, he struck a long drive that settled just 40 yards from the cup. Later, he parred six of the last nine holes to finish tied with West Davidson’s Will Goins for the day’s low score.

“Alex was good last year,” said Hatley. “This year, he’s next level. That’s what happens when you put in the time and effort to get better.”

“I was 7-over par through eight holes,” Robins reported. “But I recovered in time and went even over my last 10. I knew I had to be more consistent.”

“Hank has been nipping at Alex’s heals all season,” Hatley noted. “So as a freshman, I’m really impressed with his score.”

Hatley, a Davie County graduate, called West Davidson “a bunch of nice guys,” before adding: “I think they’re losing three of them next season. We’ll definitely put up a good challenge to them next year.”

“Yeah, but I was No. 1 on this team last year,” he said. “It’s just that I’ve been struggling this whole season.”

Britton was at his best on the par-3, 165-yard sixth hole, where he recorded his only birdie.

“I hit a 7-iron dead on the flag — and I thought it was in,” he recalled. “I ended up hitting a two-foot tap-in for birdie.”

Everhart was simply awed by Britton’s well-struck tee shot. “I thought it had a chance of going in,” he said. “I truly did. It was right there, but ended up stopping about a foot past the hole.”

“That’s where we’ve been most of the season,” said Everhart. “We’ve had five guys who consistently score in the 40s in a nine-hole match and break 100 in an 18-hole match.”

NOTES: The Midwest Regional will be held at Oakwood Country Club in Wilkesboro. The top three teams will qualify for the state tournament May 8-9 at Pinehurst. … Three of Thomasville’s players withdrew from the tournament. … West Davidson’s Nic Lamberth was the CCC Player of the Year, based on total strokes.