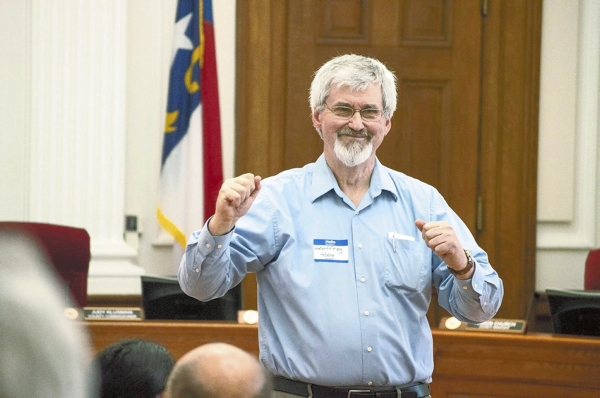 Geoffrey Hoy is chairman of the Rowan County Democratic Party.

Hoy, 74, was elected Saturday to his second full term as chairman during the party’s annual convention. He became chairman in 2014 after Veleria Levy stepped down for personal reasons. In 2015, Hoy was elected to a full term.

In an interview Monday, Hoy said the party needs to increase involvement from local people and find good candidates to run in local elections.

“The challenge that we have in front of us is the expansion of our organizational structure to include more people in doing specific tasks,” Hoy said.

He cited communication and precinct organization as examples.

In recent months, he said, the county party has made progress toward its goals. Traditionally, the party’s executive committee included eight to 12 people. Now, that number is more than 20.

Recent developments have drawn more people who want to volunteer their time, he said.

“We are expanding the involvement of concerned people while actively carrying out the policies and principles of the Democratic Party,” Hoy said. “It’s the expansion of involvement at all levels.”

Even in precincts where there aren’t many Democrats, Hoy said, party organizing remains important.

In addition to bolstering its base of volunteers, Hoy said the party will find good candidates to run for the 13th and 8th congressional district seats, both of which are currently held by Republicans.

Hoy is a retired Lutheran pastor who still preaches on an as-needed basis. He and his wife, Dottie, moved to Salisbury in 2009.

Other party officers elected Saturday will serve through 2019. They are: