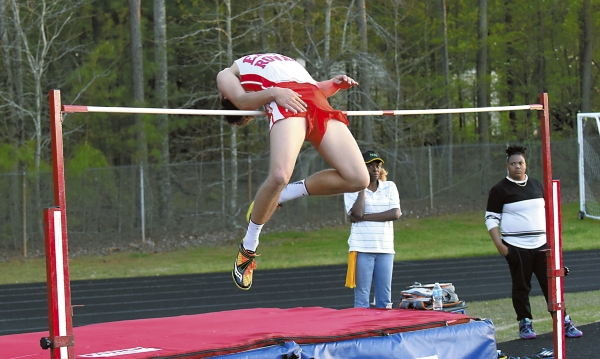 They didn’t win this one with a heroic sprint by a superstar on the final leg of the 4×400. This one the Mustangs took quietly, with cross country warriors Sean Incardona and Ross Alexander grinding out weary strides on the final lap of the 32oo meters. Neither won the event, but Incardona’s second and Alexander’s third — 14 critical points in the big picture — provided the fuel for an upset East team victory and a Gatorade bath for head coach John Fitz.

“On paper, based on the times guys had run coming in, West Rowan was 19 points better than us,” Fitz said. “Sean and Ross finishing ahead of two good West kids in the 3200 was really big. Jonathan Brindle winning the high jump was very big. A lot of kids came through. You don’t win the county without a lot of kids performing their very best. We had a team meeting yesterday. We talked about it, and we said that it could be done. Then our kids went out and did it.”

Incardona was a few steps behind West pacesetters Andrew Burgess and Nathan Zauner all evening, but with second places in the 800, 1600 and 3200, Incardona, who had personal bests in the 800 and 1600, was a huge factor.

“I was getting a little depressed because I wasn’t winning anything,” Incardona said. “But then we found out we were ahead and we gave everything we had to pull it out as a team.”

Brindle, who careered by clearing the high jump bar at 6 feet, 2 inches, and discus man Efrem Gaither, who thew 10 feet past his seeded mark, were the only individual winners for East, but those second, third, fourth, fifth and sixth-place finishes outdistanced the competition.

Defending champion West won most of the events and boasted most of the individual stars. Distance MVP Burgess took the 800 (2:00.52) and 1600 (4:39) and anchored the winning 4×400 unit and 4×800 units. Cameron Butler got the 4×400 and 4×800 teams off to blazing starts and won the individual 400 (52.09 seconds). Sprints MVP Jalen Houston swept the two hurdling events and placed second in the 100. Javon Lofton defended his crown in the shot put. Relentless Nathan Zauner, who leads the county in training miles, stormed to victory in the 3200. West sent four football standouts onto the track and won the 4×100.

And yet, the Mustangs prevailed with superior depth.

“Rick Roseman and (the late) Jamey (Big Daddy) Ledbetter built this program into something special,” Fitz said. “Rick said they started out with 9 or 10 kids, but the next year it was 25, and then it was 50, and then it was 75. A key is being able to put three kids in everything, and we do that. There’s a whole lot of track tradition here.”

Waves of East boys contributed points in individual events, including 16 by sprinter/jumper Sam Wall.  It was enough to hold off a virtual all-star team of Falcons.

Salisbury sophomore Tyrone Johnson, a blur who scored 27 touchdowns for the jayvee football team last fall, was super. He won the 100 and 200 and keyed the Hornets’ victory in the 4×200. He held off Carson’s Brenden Westbrook, who appeared to be a foot taller than Johnson, in the 200 as the crowd roared. Westbrook broke the school record. It wasn’t enough.

“I’ve been thinking about nothing but the county meet since the season started,” a beaming Johnson said. “I knew what I had to do today to beat guys like Houston and Westbrook, and I did it.”

Field MVP Westbrook was sensational in his own right. Alternating between jumps and sprints, he led Carson’s effort.  The Catawba football signee won the long jump (22-5) for the third straight year and took the triple jump for the second time. He was second in the 200 and helped Carson finish second in the 4×400.

“A very tiring day,” Westbrook said. “But I like to compete and I wanted to do everything I could to help my team.”

Christian Turner scored 14 points for Carson with a second and a third in the hurdles.

South got a win from pole vaulter Tristan Gabriel. Gabriel and East’s defending champ Lee Sharum both cleared 12-6, but Gabriel had fewer misses.

Sharum contributed 16 points for East. He also had a second in the shot put.

Carson wheelchair athlete William Fuller earned points for the Cougars in the shot put and 100 meters.