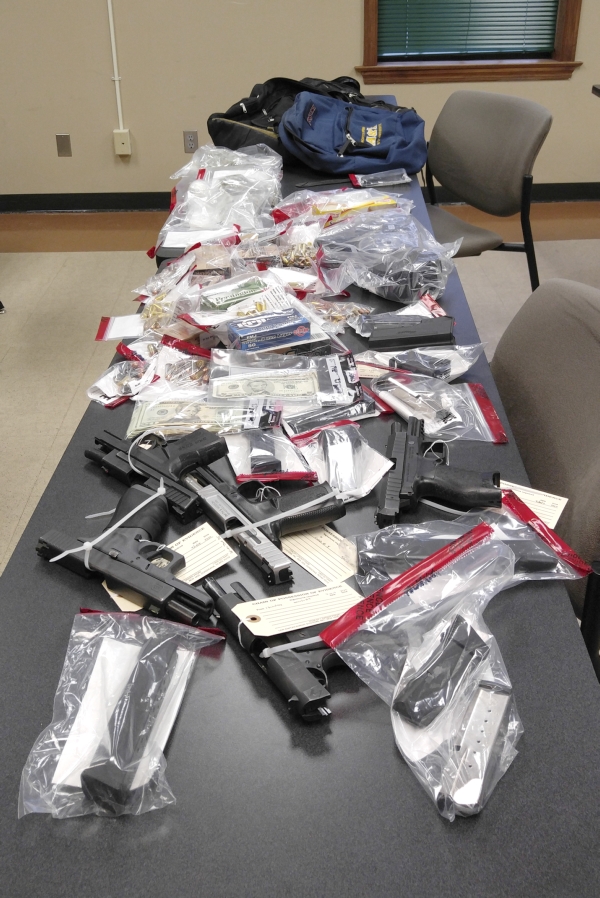 SALISBURY — Three men, including a 16-year-old, were charged Monday after police confiscated five handguns, marijuana, cocaine and hundreds of rounds of ammunition after spotting one of the men walking in the street.

A Salisbury police officer saw a Chevrolet Malibu parked at West Fisher and Lloyd streets about 7:30 p.m. and recognized Aquavius Robert Lee, a man who had outstanding felony warrants, walking near the car with two others. The officer said he could smell marijuana as he approached the vehicle. He spoke with the driver and searched the car.

Police charged Lee, 20, of the 1300 block of West Bank Street, with felony possession of a controlled substance Schedule II and misdemeanor possession of drug paraphernalia. He has April 5 warrants for felony attempted common law robbery and misdemeanor simple assault. Lee remains in the Rowan County Detention Center under a $7,500 secured bond.

Police said Wilks was a passenger in the vehicle and told the officer he had a gun and a permit to carry it. He was issued a $5,000 secured bond and was released from the county jail.

The car belonged to a relative of Wilks who gave him permission to use it, a police report said.

John Alvin Jefferies Jr., 16, of the 800 block of South Fulton Street, was charged with misdemeanor carrying a concealed weapon and misdemeanor possession/carrying a firearm by a minor. He remains in the county jail under a $2,500 secured bond.

Shall we dance? Catawba College students go to the prom at Oak Park Retirement community

It was a night of fun for all ages at the Oak Park Retirement Prom on Saturday. Students from Catawba... read more