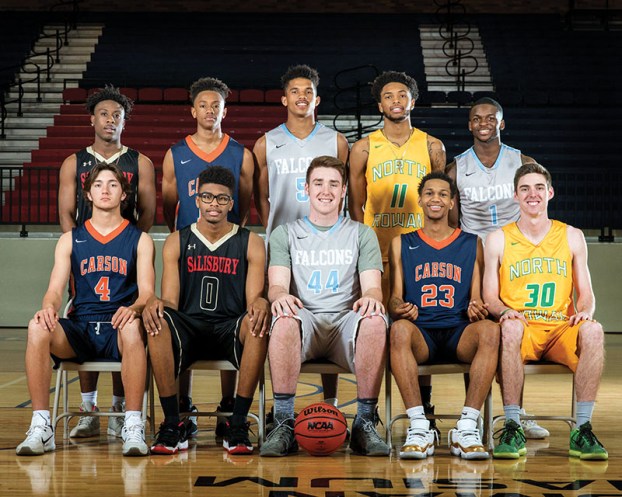 Caleb Mauldin, West, 6-8 Jr. — All-South Piedmont Conference. The Rowan County Player of the Year averaged 19.4 points and 13.2 rebounds to lead the Falcons to an 18-10 season. Mauldin had 544 points this season and has scored 1,396 in his career. He leads an experienced first team that includes three seniors and two juniors (Mauldin and Jamarius Hairston) who have been standouts since their freshman seasons.

Jamarius Hairston, Carson, 6-4 Jr. — Hairston topped 20 points 12 times and averaged 19.2 points per game. Long and lean, Hairston, who scores inside, outside and from mid-range, was in double figures 23 times in 25 games. The two games in which he didn’t score at least 10 were against West Rowan, but he also had a 30-point effort the night Carson beat the Falcons. Hairston already has scored 1,064 points in his career to rank fifth in school history and repeats as a first team pick. All-SPC.

Henderson Lentz, North, 6-4 Sr. — Lentz,  a prolific 3-pointer, had a stretch of six straight games in which he scored 20 or more points and averaged 16.7 points for the season. He also averaged nearly 10 rebounds per game. The Central Carolina Conference Player of the Year, Lentz, who nearly died on the court in a summer camp prior to his junior season, continued one of the great comeback stories in county history.  Honorable Mention last season.

Joseph Scott, North, 6-1 Sr. — A 1,000-point career scorer for the Cavaliers, Scott got a surprising amount of his points in the paint through sheer will. By his senior year, he was a fine shooter and was responsible for some of the most electrifying games in the county this season. He scored 31 and 32 back-to-back to lead wins against Lexington and Salisbury and poured in a career-high 35 in a loss to Thomasville in the next-to-last game of his career. Scott was a second team pick in 2015 and also made the first team in 2016. All-CCC.

Tre Oats, Salisbury, 6-6 Sr. — A four-year varsity player, Oats got better every year and finished his career with 802 points. Oats averaged 15.5 points as a senior and posted several double-doubles. He scored 51 points in the Hornets’ two playoff games. Oats was on the second team last season. All-CCC.

Jailen Williams, Carson, 5-9 Jr. — Williams made the high-scoring Cougars roll with his ballhandling and drive-and-kick abilities. He averaged 12.7 points per game and led his team in assists. He topped 20 points four times, including a career-high 26 in a win against Northwest Cabarrus. Honorable Mention all-county last season. All-SPC.

Trell Baker, Salisbury, 5-10 Jr. — Point guard Baker made the Hornets go, and when he was good, they were good. He averaged 13.5 points. He topped 20 points five times and had 27 in the playoff loss at Forest Hills that ended the season. He also was second team last season. All-CCC.

Owen White, Carson, 6-4 Jr. — White got off to a slow start after football season, but he had a 28-point game against West Rowan and scored in double figures in Carson’s last 10 games. He averaged 11.6 points per game for the season and was a strong rebounder. Honorable Mention last season.

Paris Hillie, West, 5-9 Sr. — Hillie averaged 11.0 points and added a lot of nice dishes for the Falcons. He scored in double figures 17 times, including a 23-point outing in a playoff win at Tuscola. All-SPC.

Kortez Weeks, 6-1 Sr. — The Elon football signee made a strong football comeback after taking his junior year off. He averaged 10.5 points and boosted the Falcons’ defense and athleticism. Honorable Mention as a sophomore. All-SPC.

Bailey Graham, South, 6-1 Jr. — Graham scored in double figures 15 times and topped 20 twice for the Raiders. He averaged 11.5 points for the season and had 15 when South broke a 47-game losing streak by beating East Rowan.

Austin Love, West, 6-2 Sr. —Love averaged a modest 5.8 points per game, but he was a big part of West’s strong season with his rebounding and defense.

Will Leckonby, Salisbury, 6-3 Sr. — Leckonby averaged 10 points and was one of the county’s top 3-point shooters. All-CCC.

Brevin Goodlett, North, 6-3 So. — Goodlett averaged 7 points and turned in a number of double-digit rebounding games for the Cavaliers.

Sergio Garcia wins the Masters, ends drought at the majors

AUGUSTA, Ga. (AP) — Sergio Garcia tugged the lapel of his green jacket with both hands, proud of his prize... read more