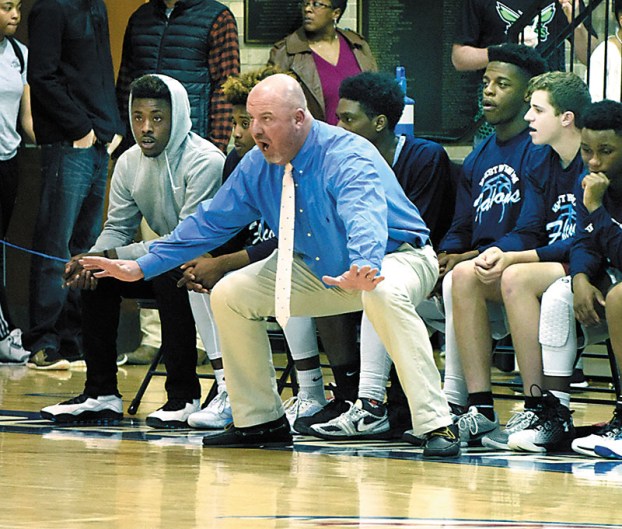 SALISBURY — West Rowan High boys basketball coach Mike Gurley has one more season in him, but only one.

His 21st season in Mount Ulla, where he’s become a foot-stomping, joke-cracking, character-building legend, will be his last. He’s mellowed a bit over the years — you no longer worry that he’s going to kick a hole in the floor — but only a little.

This was a solid season for West, for Mauldin and for Gurley, the Post’s choice as the Rowan County Coach of the Year. The Falcons were 18-10. They won the Dale’s Sporting Goods Sam Moir Christmas Classic, as Gurley logged his record sixth championship, and they went 12-6 in the South Piedmont Conference.

The Falcons finished fourth in the SPC. That means West finished ahead of three Cabarrus teams. That’s a significant accomplishment. Three SPC schools — Hickory Ridge, Cox Mill and Central Cabarrus — dwarf West when it comes to the size of the player pool. Those are schools with 1,700 or so students. West has less than 1,100. The other three Cabarrus SPC schools — Robinson, Northwest Cabarrus and Concord  — aren’t exactly giants, but they’re all quite a bit larger than West.

“We play in a 3A league, but I tell people we’re playing in a split 3A/4A conference,” Gurley said. “It’s a challenge with the difference in numbers. The Cabarrus schools have really strong programs, and we’ve faced some of the best players in the state. There’s never a break, but it makes you better.”

It was a grueling season for Rowan’s SPC teams. For West Rowan, there was a worst-nightmare, six-game stretch late in the season when West tackled Cox Mill, the team that eventually won the 3A state championship, three times. Cox Mill survived a two-point game against the Falcons in Mount Ulla, then eliminated West from the South Piedmont Conference Tournament and from the 3A state playoffs in the second round.

There were bruising stretches when West took on Robinson, Hickory Ridge and Cox Mill, all ranked teams, back-to-back-to-back. “The Cabarrus Gauntlet,” Gurley called it.

At the end of that long season, Gurley actually said his goodbyes, fought back his tears, made his speeches, hugged everybody who had anything to do with West basketball, and was certain he’d reached the end of the line. His two best guards were seniors, and another talented guard was transferring. Rebounding machine Austin Love, the county’s most underrated player, was also a senior. Rumors were everywhere that Mauldin would be leaving for a prep school or private school to boost his recruiting profile.

But Mauldin didn’t really want to go anywhere else. He wanted to end his career in the light blue, as one of the best players in a storied program’s history, and he wanted to end it with Gurley screaming at him one minute and embracing him the next. And so Gurley had a change of heart. He’ll be back for one last season before he rides off into the sunset as the winningest coach in Rowan County history.

Taking on Iredell County teams next winter won’t be a picnic — Statesville and South Iredell always have talent — but the days of the “Cabarrus Gauntlet” will be in the past. And it’s hard to say just how much damage Mauldin will do against normal 3A teams if the Falcons can find a few reinforcements.

There was a time when the Rowan County Coach of the Year award for boys basketball could’ve been renamed the Mike Gurley Award.

As athletes such as Scooter Sherrill, Donte Minter, Junior Hairston, Phillip Williams, Jamel Carpenter, K.J. Sherrill and Keshun Sherrill paraded through the western end of the county, Gurley racked up coach of the year honors in 1998, 1999, 2000 (co-winner with North’s Kelly Everhart), 2002, 2003, 2007, 2008 and 2010.  So this is the ninth county honor in his amazing career, but it also ends a little dry spell.

Gurley, who has coached the top six scorers in West history, seemed to appreciate this one as much as any of the previous ones. Maybe even more than the previous ones because West made a comeback from nowhere. In 2015-16, the Falcons went 7-18 and dropped their last six games. For Gurley to lose six straight, that was as strange as Clayton Kershaw giving up six straight homers.

Gurley is 391-166 at West Rowan. He was the conductor of that 61-0 freight train in 2001-02 and 2002-03 that won two 3A state titles, a feat that may never be matched no matter how long basketballs bounce in the county. Counting the 102 victories (and another state title) Gurley accumulated at Lexington High before then-principal Henry Kluttz brought him to West for the 1997-98 season, Gurley’s career mark is 493-205. That means No. 500 should come along at some point next season. Hopefully, it will come at home.

So enjoy Gurley next season, enjoy his swan song, whether you adore the Falcons or hate them. The tough love he’s dispensed at West Rowan for two decades made the Falcons better and Rowan County basketball better. Gurley has set the bar high, but there have been times during his years at West that East, Salisbury, North or Carson rose to the challenge and climbed past the Falcons.

This season, however, it was West’s season. They were the county’s best— 10-2 in county games and a winning record against all county opponents.

“The SPC has been crazy-good the last four years,” said Carson coach Brian Perry, who guided his team to fifth place with an 11-7 record. “I’m 100 percent sure it’s been the toughest 3A league in the state, and we’ve not only had the last two state champions, it’s been two different schools. West did a great job of competing in a great league. Mike had a super year.”

By Mike London mike.london@salisburypost.com SALISBURY — West Rowan’s Caleb Mauldin goes to a school that has produced many of the legends... read more