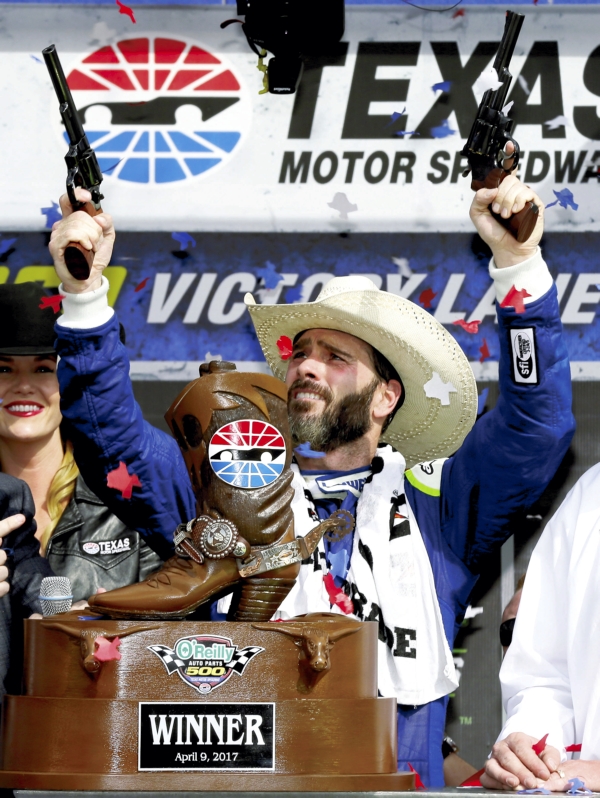 FORT WORTH, Texas (AP) — Jimmie Johnson still knows how to get to Victory Lane at Texas, even from the back of the field on a track that had changed significantly since his first six wins there.

And also while cramping because of dehydration late in the race that he won Sunday after charging under Joey Logano with 16 laps left .

“When I caught Joey and was racing with Joey, I started cramping pretty good on my left side — my chest, and my bicep, my forearm,” Johnson said. “I knew I was real low on fluids.”

Johnson discovered right after the start of the 334-lap race that there was a problem with the fluid delivery system in his car. But that and the track changes didn’t keep him from his first win this season , and the 81st in the career of the seven-time NASCAR Cup Series champion.

“I didn’t really say much about it,” he said. “I was so happy the car was running good, and we weren’t making mistakes, I kind of overlooked it all.”

Until he caught up with Logano after the final restart, and then got to Victory Lane.

While hot, Johnson said he initially felt better after getting out of the No. 48 Chevrolet. But when his back, chest and arms started to lock up while doing an interview, he went to the infield care center and got three bags of IV fluids.

When Johnson finally made it to the infield media center for his postrace interview about two hours after the checkered flag, he said he was feeling much better. He was also looking forward to his planned off-week trip to Mexico that he said would include a sunburn, margaritas, chips and guacamole.

Johnson and crew chief Chad Knaus said they weren’t sure what caused the problem with the fluid system.

This was the first Cup race in Texas since the 1 1/2-mile facility was completely repaved and changes made to Turns 1 and 2 earlier this year. It was Johnson’s seventh victory at Texas, six in the last 10 races there.

Earnhardt also said he was hot after the race, because of a problem with the unit that is supposed to pump cool air through his helmet. Earnhardt, Johnson’s teammate with Hendrick Motorsports, needed no special treatment.

Johnson had to start at the back of the 40-car field because of a tire change after a spin in qualifying. He had qualified 24th.

Johnson’s only top-10 finish in the first six races this season had been ninth at Phoenix. Earnhardt had his first top-five finish since a runner-up at Pocono last June, not long before he missed the last half of the season because of lingering concussions symptoms.

Ryan Blaney won the first two stages and gave Wood Brothers Racing, the oldest active team in NASCAR, its longest front-running car in a race in 35 years. The 23-year-old Blaney finished 12th after leading 148 of 334 laps, the first time the team led more than 100 laps in a race since 1982.

Blaney first got the lead on the second early restart on lap 16, with a somewhat bold move around the outside of Harvick going through the reconfigured Turns 1 and 2, where the banking was reduced and the track widened.

During a caution on a few laps before the end of the second stage on lap 170, Blaney stayed on the track for a shot to win the stage while other cars pitted. Blaney restarted 20th after that stage and his stop, but after working back into the top 10, he overslid his pit on the last caution.

“That last pit stop was pretty discouraging,” Blaney said. “I don’t know what it was there at the end of segment two and that made everybody have split strategies, and we got in the back and couldn’t pass anybody. It was terrible to try to pass people.”

Logano regained the lead after not pitting on the final caution, but just didn’t have enough to hold off Johnson. “I needed a 15-lap run instead of a 30-lap run,” Logano said. “Or a couple cautions in there and we would be standing in Victory Lane with a 12th-place car, and that would have been something.”

Both Cup races at Texas last year had lengthy rain delays, and the November race was cut 41 laps short by more rain after starting nearly six hours late. There was no threat of rain Sunday — good thing the race wasn’t a day later, when storms are in the forecast — but there were wind gusts of 30 mph or more throughout the race.

After the traditional Easter weekend break, the next Cup race is April 23 at Bristol.