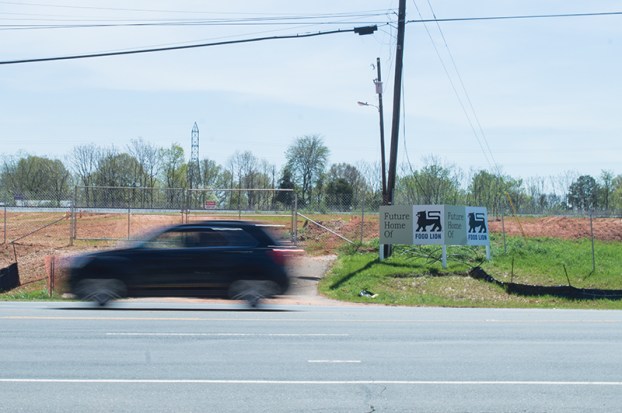 Josh Bergeron / Salisbury Post A car drives by the site of a planned Food Lion store on the northern end of China Grove. The Town of China Grove has granted Food Lion additional time on zoning rights at the site because of road construction.

CHINA GROVE — Construction associated with the widening of Interstate 85 has complicated plans for a Food Lion store on on the north end of town.

The China Grove Town Council last week extended the amount of time in which Food Lion is allowed to build or use a store near the intersection of U.S. 29 and North Main Street. In April 2016, the town council unanimously approved a conditional use permit for a store proposed at the north end of China Grove. On Tuesday, the town council gave Food Lion another five years to use its conditional use permit.

A letter from Food Lion spells out reasons why waiting to build the store would be beneficial.

“The N.C. DOT work will directly impact the Food Lion project and will severely limit, if not totally restrict access to the property during the bridge and roadwork construction,” wrote Mark Rufty, senior manager of self-developed properties.

Construction work on a bridge over railroad tracks on U.S. 29 and N.C. 152. would specifically affect the Food Lion store.

“There’s going to be lots of traffic control involved,” said N.C. DOT engineer Kelly Seitz. “It was mutually agreed to by Food Lion and the Department (of Transportation) that it’s best for them to hold off on the store opening. They could start building the store, but having the store open while work is going on out front would be difficult.”

The proposed store would be just over 35,000 square feet and be a standalone building — not a shopping center — according to plans presented last year. The store’s developers have been asked by the China Grove Town Council to place additional greenery and the parking lot and greenery at the rear of the property, which will be adjacent to railroad tracks.

China Grove Mayor Lee Withers said Food Lion is a great partner for China Grove and Rowan County. Withers said China Grove chose to approve the vested rights so the company would be able to build its store without coming back again to ask for a permit.

In addition to issues with access to the store, Withers and Seitz said costs for the Food Lion store would be lower if the company waits. Specifically, a deceleration lane for cars to turn into the store would cost less — several hundred thousand dollars lower, Withers said.

Seitz said the railroad bridge on U.S. 29 and N.C. 152 could be done in 2018. As for the other work associated with I-85’s widening, Seitz said construction is on schedule.