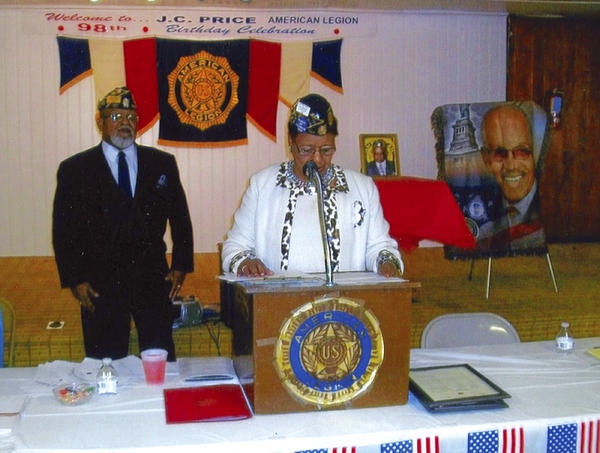 Commander Carroll introduces Abe Daniels, Past 2009 Department Adjutant of the Year, as presider of the anniversary program.

The American Legion is the largest veterans organization for veterans Commander Carroll presents Homer Robertson a certificate of appreciation for his tenure as District 19 Commander.

Commander Mae Carroll announced the appointment of Abe Daniels, Past 2009 Department adjutant of the year, as presider of this program. Chaplain Leonard Hall opened the program with a prayer. Daniels and Hill performed the POW-MIA ceremony followed by the Pledge of Allegiance. Commander Carroll, past 1992 Dept. Legionnaire of the year, presented the Welcome and the Occasion and spoke about the historical  perspectives of the American Legion and Post 107.

The Honorable Mayor Karen Alexander was unable to attend due to the city’s annual retreat. Abe Daniels read a proclamation from the City declaring Tuesday, March 21, 2017 as American Legion Day. Daniel Haddock presented a dedication to the late Roy Leazer and Wade Murphy. He introduced Mary Nash, Roy Leazer’s daughter, to the audience. The American Legion dinner was prepared and served by Legionnaires and Auxiliary members. Daniels led the audience in the Happy Birthday song after the cutting of the  cake which was inscribed with “Happy 98th American Legion Birthday.”

John Knox presented The Post Queen, Heavenly Robinson, and a special trophy honoring her for dedicated services was rendered to the Post during her reign. Robert Bratcher was given an appreciation recognition for driving his Corvettes for all Post 107 queens in all designated parades. Wayne Hill  recognized the 2015 Boy Stater, Taelor, with a certificate of citizenship for successfully completing the Boys State program at Catawba College last June. certificates of appreciation were given to Freddie Turner, Harold Broadway and Arnethia Daniels for sponsoring a boy to Boys State this year.

Mesha Baig recited a poem and discussed her children’s books. She also reported that she is in the process of organizing a Prevent Suicide March. Her brother committed suicide one year ago.

Four of our local women, all experienced runners and marathoners, are going to their first New York City Marathon this... read more