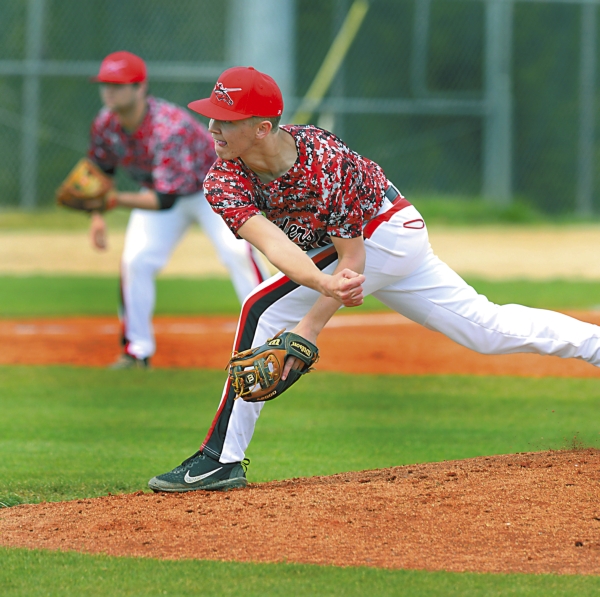 LANDIS — It must have been “Don’t Mess With Walker Joyce Night” at South Rowan.

“We all just relaxed and played our game,” Joyce said after South (11-5, 9-4) snapped a two-game losing streak and moved into a four-way tie for second place in the SPC standings. “We didn’t think of it as the big Carson-South rivalry game, as everyone labels it. We just wanted to play.”

No one’s play was more illuminating than Joyce’s. He struck out nine, walked two, allowed just one earned run and carried a no-hitter into the sixth inning.

“He pitched up to his capability,” winning coach Thad Chrismon said after Joyce won his fourth game. “He hit his spots and gave his teammates a chance to make plays behind him. All of his pitches move, but he did a good job of getting ahead with fastballs and then putting people away with his movement pitches off the plate.”

Joyce used a biting fastball, sweeping curve and occasional change-up to shackle Carson’s squirt-gun offense. The Cougars (10-5, 9-4) were limited to late-inning singles by Logan Ridenhour and Cole Hales and absorbed their second loss in as many nights.

“This league’s tough,” coach Chris Cauble said after Carson was evicted from first place following a month-long stay. “We can’t lick our wounds now because West isn’t going to feel sorry for us tomorrow.”

Carson plays a make-up game at conference-leading West Rowan this afternoon. A victory would move the Cougars back into a first-place tie with four league games remaining.

“That’s what’s so great about this conference,” Joyce noted. “Every game is questionable. Every game is up for grabs. This is what makes baseball so much fun.”

The Raiders certainly enjoyed themselves last night. They collected 12 hits — including two doubles by leadoff batter Dawson Larrimore, another by Joyce and a whistling, solo home run by shortstop Tyler Shepherd.

“We were just out here having fun,” Larrimore said after going 3-for-4. “Coach Chrismon told us to just relax and play the game. We don’t need to know who we’re playing or who’s pitching. It’s just another game against another team.”

South loaded the bases but failed to score in the bottom of the first inning against Carson right-hander Cam Prugh, then took a 1-0 lead in the second. Chandler Norton lined a two-out single into right field and advanced to second on an erratic pickoff attempt. He scored when Larrimore crushed a sky-scraping double to deep center.

The first of South’s two highlight reel defensive plays came in the top of the third. With Hales on first base, Carson’s Logan Ridenhour chopped a grounder to third-baseman Hayden Wilson, who muffed the play and wound up chasing the ball down near second base. Hales, noticing that third base was unguarded, broke from second but was nailed when Wilson fired a strike to Joyce racing to cover the bag.

“It was just an accident,” Joyce said following his heads-up play. “No one was there so I took command. We needed to get him out.”

South added a pair of unearned runs in the last of the third — one on an erratic pickoff throw to first base and another when Dillon Norton slapped a two-out, RBI-single to left. Joyce’s run-scoring single made it 4-0 in the fourth Shepherd’s third homer of the season gave the Raiders a five-run edge. Carson got on the board on Owen White’s sixth-inning sac fly and the second of South’s four errors.

The game ended, however, with another South web gem. Hales whipped a two-out single to right that plated teammate Chase Earnhardt in the seventh. When Hales tried to stretch it into a double he was gunned down by right-field Dillon Norton at second base.