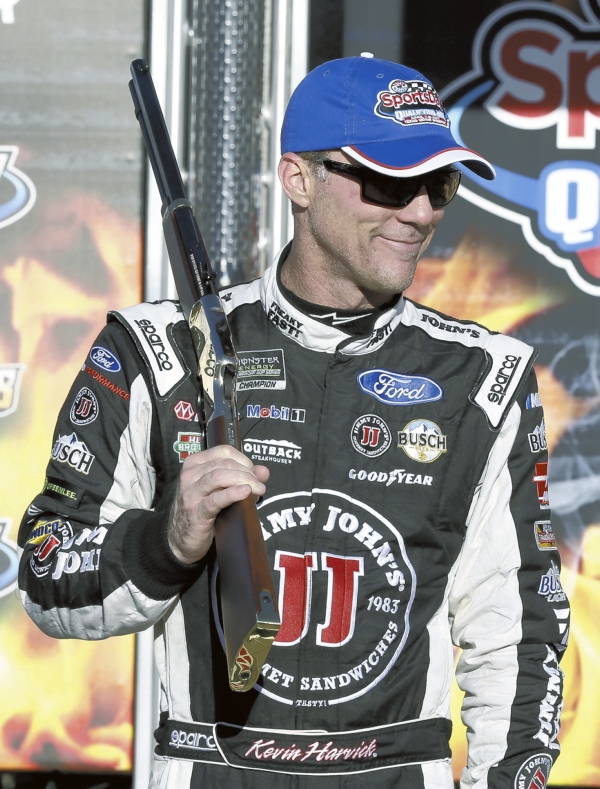 FORT WORTH, Texas (AP) — Kevin Harvick quickly got up to speed on the new pavement at Texas Motor Speedway, while some top drivers never made on the track for qualifying.

Harvick won all three rounds of Monster Energy NASCAR Cup Series qualifying Friday, earning his 19th career pole with a lap of 198.405 mph during the final segment at the 1 1/2-mile track that was completely repaved this year.

“It’s been a stressful day, coming and breaking in a new race track and then going out there and running as fast as we had to run for qualifying,” Harvick said.

Nine of the 40 cars in the race didn’t make it through inspection in time to make qualifying runs. Those included series points leader Kyle Larson, three of the four drivers for Hendrick Motorsports and defending race winner Kyle Busch after his practice crash earlier in the day.

Ryan Blaney qualified second at 198.020 mph, and will start on the front row Sunday even though he had the same qualifying speed as Clint Bowyer.

“The track has come a long way since we got on it for the first time this morning,” Blaney said. “The first hour was very sketchy getting into Turn 1. Turn 1 has been slick all day. Three and four has actually had a lot of grip. It is surprising how much throttle we can carry over there.”

The only Hendrick driver to get on the track for qualifying was Jimmie Johnson, but the six-time Texas winner got loose and spun on the track in the first round. He still got into the top 24, but will start 24th since he didn’t run a lap in the second round of qualifying after the spin.

Larson will start 32nd, a spot ahead of Hendrick driver Chase Elliott, who is second in points and will be in a backup car after crashing the primary No. 24 in practice.

“I’m looking forward to trying to get our car right for the race and trying to get to Victory Lane on Sunday so (track president) Eddie Gossage will leave me alone,” Harvick said.

This will also be the 29th Texas start for Kurt Busch, Dale Earnhardt Jr., and Matt Kenseth. The track record is 30 starts by Jeff Gordon, who now is in the TV booth instead of a cockpit.

Harvick, like Blaney, said he benefited from the extra time on the track when practicing Xfinity cars for Saturday’s race in that series.

“I’ve got to say thank you to the Xfinity guys for letting me run that car this weekend,” said Harvick, whose other Cup pole this season was at Atlanta, where he also ran the Xfinity Series. “I really feel like the reps allowed us to learn some things in that car that I was able to apply here.”

Fred Couples, at 57 years old, is in contention…