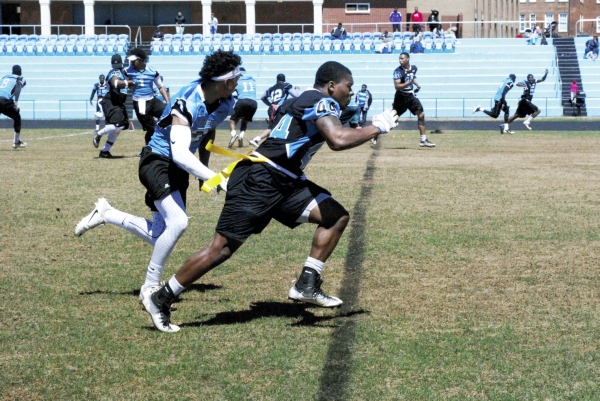 SALISBURY — Livingstone did something a little different for its spring football game at Alumni Memorial Stadium on Saturday afternoon.

Instead of a scrimmage, head coach Daryl Williams invited area alums to come back and play some flag football with the current Blue Bears.

“There’s an advantage to letting the guys just come out here and have some fun, instead of the grind of doing the same old thing,” said Williams. “I like this idea of getting some of the former players back here to mix it up with our current team.”

Williams stood on the sideline and let his assistant coaches run the show, and while a good time was had by all, there was still a lot of interest in the players who will don the Livingstone uniforms this fall.

In addition to some of the stars from last season, like leading receiver Everett Ransom and defensive back Gregory Hines, there were transfers who enrolled in January — like 6-1, 180-pound DB John Jones.

“Jones is a new secondary player that we really like,” said Williams. “He’s tall and plays even longer. We also got four others from his school.”

Anthony Mullis, who starred at Central Cabarrus before signing with Elon, has also transferred to Livingstone. Mullis is the son of Blue Bears’ Hall of Famer and former NFL player Ben Coates.

Coates, a tight end, played in Super Bowls with New England and Baltimore. Mullis, 6-3, 220 pounds, is also a tight end.

Two of the four QBs left school at the semester break, leaving Longerbeam and Thaddeus Bell to battle it out during spring practice, along with newcomer Trey Willis.

Williams added that last week’s poor weather has pushed back the ending of spring practice. He said the Blue Bears will scrimmage on Monday afternoon and end spring ball on Tuesday.

“I’m real pleased so far with spring practice,” said Williams. “We got the special teams in and the quarterbacks are progressing. I also like where our secondary is right now. I like our numbers (55) and we’re healthy. With two more practices, I hope we can get out of here without anyone getting hurt.

“I really like this group,” continued Williams, now is his fifth year at Livingstone. “Of all the spring practices I’ve been through here, I think we’re ahead this year, more than any other.”

NOTE: Williams had to battle pain from back surgery during the season last fall, but reports that he “100 percent” healthy now, and has resumed running and playing golf. … Latrell Flowers, who finished his career at running back last season, is now on the coaching staff, as he continues to work on his degree. … Linebackers coach Tony Keiling Jr. has left the staff and Williams said that his replacement will be named later.