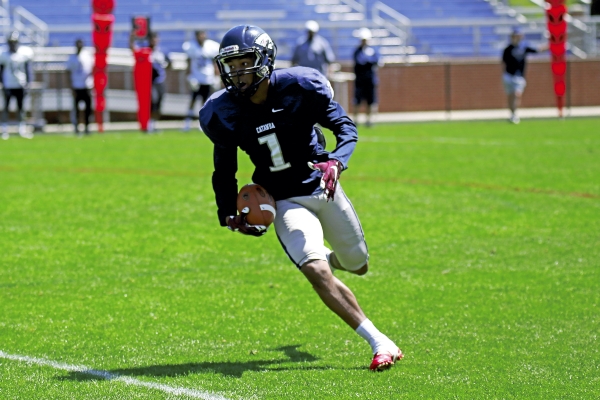 James Sipes/for the Salisbury Post ... Catawba wide receiver Sam Mobley (1) heads for the end zone on one of his four touchdowns during Saturday’s Blue-White game. No official records are kept for Catawba spring games, but those scrimmages are traditionally defensive-minded.  Mobley may have had the biggest day ever on Saturday, with six catches for 174 yards and four touchdowns.

“Mobley makes us all better coaches,” smiling Catawba head coach Curtis Walker said. “He’s a very good receiver. When he couldn’t use two hands today, he made catches with one hand. He’s going to make it fun for our quarterbacks.”

Mobley explained that on his one-handed catch, his face mask was grabbed.

“I just put my hand out and the ball stuck to it,” he said.

Going hand-in-hand with Mobley’s monster outing, No. 1 quarterback Reid Carlton thrived. He tossed for 302 yards and five scores, with his fifth TD pass going to Dillon Mazepa. On the Shuford Stadium scoreboard, it was “Catawba,” which had Carlton and Mobley lighting it up, battering “Guests,” 35-3.

“I’d like to spread the ball around more, but the defense was giving us the look we wanted — Mobley with one-on-one coverage —so I was throwing it to Mobley,” Carlton said.

Carlton looked sharp. He connected on scoring passes of 36, 49, 10 and 35 yards to Mobley before finding Mazepa, who made a juggling catch in the end zone, in the closing minutes.

Carlton, who still has two years of eligibility, rode a roller coaster in 2016, starting the season as the backup to senior Mike Sheehan, becoming QB-1 when Sheehan was injured, and then getting hurt himself. He threw for 1,007 yards with six touchdown passes and seven interceptions. Now he’s entering a season for the first time as the clear-cut starter, with transfer Samuel Wyrick, the former East Rowan record-breaker, and utility man Joseph Dress, who played receiver on Saturday, behind him.

“It may be a little different going into the season as the starter, but the work I put in is the same, the film study is the same,” Carlton said. “The biggest thing now is I’m all healed up, feeling good and ready to go.”

Mobley, who came to Catawba from Louisburg College last season, exploded on the scene immediately as a big-play man. He averaged a whopping 21 yards per catch on his 31 receptions, with four TDs.

Now the coaches are hoping for more, and Mobley expects more.

“I’ve done a lot of work with Reid this spring,” Mobley said. “I feel great about where our chemistry is now.”

While Catawba’s passing game was often scintillating, the running game plugged away. The green-jerseyed Carlton, who only had to be tagged to be considered down, managed a 19-yard run. Eamon Smart had a 30-yard jaunt, while Kenyatta Greene blasted for a 25-yard gain.

“We’ve made a lot of strides in our passing game,” Walker said. “The running game is coming along.”

“We had big tackles, we made interceptions, we got pressure and some sacks,” Walker said. “Our defense did a lot of good things.”

With the departure of defensive coordinator Keith Henry to the Charlotte 49ers and with offensive line coach Brian Hinson taking the Salisbury High head job, the Indians’ staff is evolving. Walker said he couldn’t announce any hires yet, but a new offensive line coach will be made official soon. Walker will be adding defensive coordinator duties to his plate, but another defensive assistant will be added to the staff.

“This spring has been as much fun as I’ve ever had,” Walker said. “Defense has always been my passion, and I enjoy that feeling of the 25-second clock ticking down and calling the defense. I’m looking forward to being the defensive play-caller.”

Walker said it’s been a healthy spring, and that means it’s been a good spring for the Indians. Depth is always a battle, especially in the spring. The seniors are gone and this year’s recruiting class hasn’t arrived yet.

Linebackers Kitchens, Evans and Michael Peppers will be defensive cornerstone this fall as as the Indians attempt to rebound from last season’s injury-plagued 5-6 season. With a lot of things going awry, Catawba still went 5-2 in SAC games in 2016, so it’s not like a return to the top of the league is out of the question.

“The key words for this offseason have been unity and discipline, and everyone has kicked in and everyone has gotten better,” Evans said. “We faced a lot of adversity last season, but we came through it.  I have big hopes and big dreams for what’s ahead of us.”

NOTES: Gavin Rose had four catches for 52 yards. … One of the bigger roars of the day from a modest crowd came when Samuel Wyrick completed a pass to his brother, Seth. The Wyricks, East Rowan grads and transfers from Tusculum, were making their Catawba debuts. Samuel hit two long pass plays, but he was ruled down on one and there was a penalty flag on the other. … Lee Brackman kicked a 46-yard field goal and a PAT. Brennan Lambert, the former South Rowan star who kicked 10 field goals and 21 PATs as a freshman, tacked on four PATs. … Catawba opens the 2017 season at home on a Thursday night, Aug. 31, against St. Augustine’s.

By Dennis Davidson dennis.davidson@salisburypost.com SALISBURY — Livingstone did something a little different for its spring football game at Alumni Memorial... read more