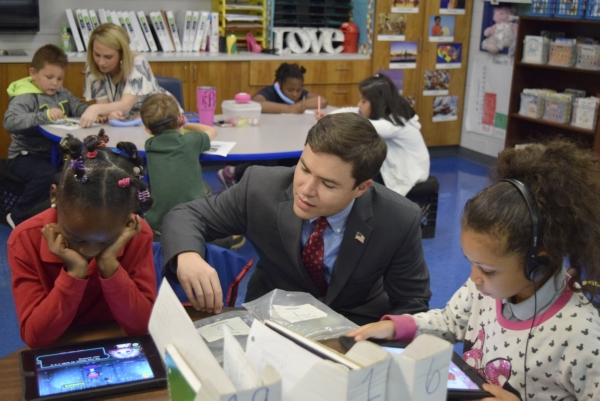 EAST SPENCER — It’s all about innovation, according to state Superintendent of Public Instruction Mark Johnson.

Johnson attended Rowan-Salisbury Schools’ “Power of Public Education” conference, held Thursday and Friday, as part of his listening tour across the state. He had the opportunity to see a play put on by Carson High School students and to tour Hanford Dole Elementary School.

Johnson said he was impressed by the level of innovation he saw at Hanford Dole, which is one of the district’s highest poverty schools with about 95 percent of students receiving free and reduced-price lunch.

When he walked into Sally Schultz’s colorful, fifth-grade classroom, however, he was shocked. Schultz, like many teachers in the district, has eliminated desks from her classroom. Instead, students can choose to sit at collaboration stations, on couches or on beanbag chairs. Johnson, a former teacher himself, said he had never seen a classroom without desks.

In Schultz’s room, students often do their own work while she works with a small group of students who need more intensive help. It allows those who are succeeding to race ahead using technology, while those who need more guidance get the personal attention they need. It’s a learning model that’s been put into practice districtwide in the past few years.

And it’s one that Johnson said he’s interested in promoting statewide.

“I say that we have to break out of this mindset of what the classroom has looked like for the past 100 years,” he said.

A classroom doesn’t have to be row upon row of desks. Instead, Johnson said, it should encourage collaboration, innovation and critical thinking.

For Johnson, technology is a key piece of that puzzle. He said he’s looking to find a way to push a statewide integration of technology in the classroom.
“That’s why we’re here today, learning what the best way to implement this is,” he said.

It would be a big leap for the state, however, and Johnson said that careful thought needs to be put into picking the right kind of technology. Teachers would need the proper training before they’re asked to take such a “big step in education.”

Johnson said he doesn’t know if the solution would be like the one-to-one initiative in Rowan-Salisbury, but he said he does like the idea of classrooms collaborating with technology. And he stressed that integrating technology would not remove the teacher from the classroom or prevent students from learning traditional skills.

“They’re still learning handwriting. They’re still using worksheets. We’re not completely taking that out. There’s still a library here; they go and they get books,” he said.

Technology could even be used to lift the heavy burden of standardized testing, he said. Much of the data collected by mid- and year-end tests could be tracked daily with technology as a regular part of the classroom.

“We can build the high-stakes testing into that to where the student is no longer even intimidated by it,” he said.

But it’s not something that’s going to happen overnight, he said. Johnson said that while RSS has had a lot of success, it still has obstacles to overcome — poverty, students’ home life and kindergarten preparedness.

“You’ve just got to keep working,” he said.

Rowan-Salisbury Board of Education Chairman Josh Wagner said he was grateful for Johnson’s visit and pleased that he spent so much time in the district.

“I think it’s really good. I appreciate him being here. Hopefully, it’s an encouragement to our teachers and staff, and to our community,” he said.

Over the course of the two-day conference, about 220 visitors came through Rowan-Salisbury schools — more than the early estimate of about 180. Visitors included state officials such as Johnson and state Rep. Craig Horn, a Union County Republican, as well as educators from five states, including Mississippi and New York.

“It’s hard to describe how proud you are when you watch your staff interact and your students interact and tell their own story from their own perspective of the journey they’ve had,” RSS Superintendent Lynn Moody said.

And while she, too, agreed that the district has a long way to go, she said she’s proud of the progress made.

“We know we’re on the right track and headed in the right direction,” she said. 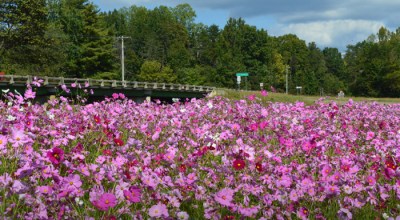