Harvey looks like ace of old in Mets’ win 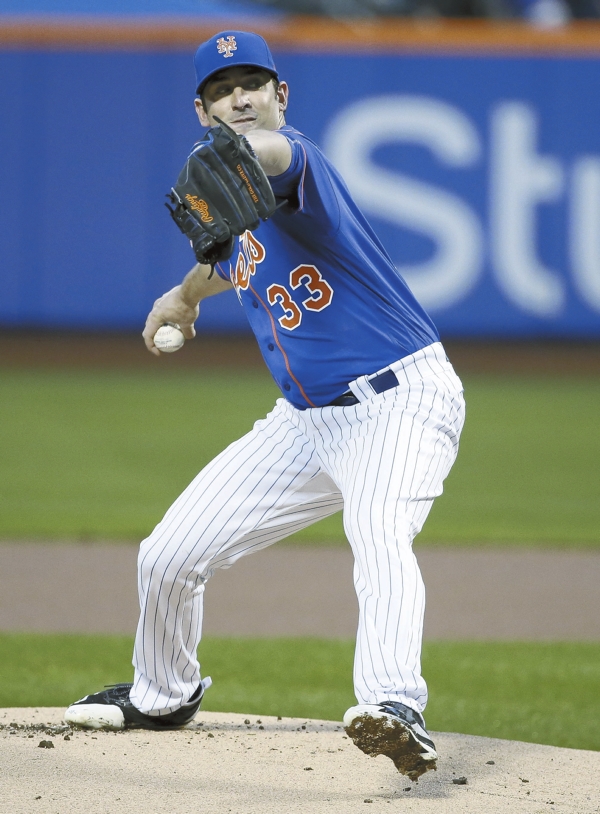 NEW YORK (AP) — Matt Harvey walked from the mound to the dugout and raised his glove with his pitching hand, acknowledging fans chanting his name.

At least for a night, The Dark Knight returned.

“I obviously have one less rib, but I feel strong and ready to go,” Harvey said after leading the New York Mets over the Atlanta Braves 6-2 on Thursday in his return from major surgery.

Harvey (1-0) won for the first time since May 30. In his previous appearance on July 4, he was chased by Miami in the fourth inning and stared at the field from the dugout, a white towel draped over his left shoulder, a despondent look on his face.

“I remember getting booed off the field last year, so I think kind of flipping that switch a little bit and keep moving forward,” he said. “It was exciting.”

Travis d’Arnaud hit a go-ahead, two-run double and Wilmer Flores a two-run homer against Jaime Garcia (0-1), who made his Atlanta debut after eight seasons with St. Louis.

A year after helping the Mets reach the World Series for the first time since 2000, Harvey struggled to a 4-10 record with a 4.86 ERA in 2016. He felt numbness in his fingertips against the Marlins and did not pitch again, undergoing surgery July 18 to correct a Thoracic Outlet Syndrome injury caused by the compression of nerves, blood vessels or both in the area between the neck and armpit.

Harvey was 0-4 with a 5.89 ERA in five spring training starts. The 28-year-old right-hander’s fastball was consistently in the 93-94 mph range — even reaching 96 mph — and he needed six pitches to get through the first inning, eight in the second, 10 in the third and 11 in the fourth.

“You’re going to look hopefully in the middle of the summer and he’s going to be back to where he was,” Mets manager Terry Collins said. “Now, is he going to be throwing 98 again? I don’t know. I don’t have a crystal ball. But I think Matt Harvey can pitch as good as anybody when he’s at 93 to 95, and he showed it tonight.”

With the Mets in Harvey’s favored blue jerseys for the first time this season, he allowed three hits in 6 2/3 innings, leaving after Matt Kemp’s second solo home run. Harvey threw 55 of 73 pitches for strikes, fanned four and walked none in a game that breezed by in 2 hours, 28 minutes.

“The demeanor, even when he ran out to the bullpen, reminded me of a couple of years ago,” said d’Arnaud, the Mets catcher.

Acquired from the Cardinals in a December trade, Garcia gave up four runs and six hits in six innings, and both batters he walked scored. Garcia became the Braves’ first left-handed starter since Manny Banuelos on Sept. 6, 2015.

“The way Harvey was going, any runs were probably too many tonight,” Braves manager Brian Snitker said.

D’Arnaud doubled to the left-center gap on a hanging curveball in the fifth for a 2-1 lead and Flores drove a low breaking ball about 3 feet from the left-field foul pole in the sixth. Flores hit .340 with 11 home runs in 100 at-bats against lefties last year.

Trailing 6-2, Atlanta loaded the bases in the eighth before Fernando Salas struck out Dansby Swanson.

Kemp, who also has four doubles this week, homered in the fifth and seventh innings for his 11th multihomer game.

Mets leadoff hitter Jose Reyes singled in the seventh, ending his 0-for-12 start. Braves leadoff hitter Ender Inciarte reached on a broken-bat infield hit in the eighth, his first hit in 13 at-bats this season.

Brandon Phillips went 0 for 3. He had gotten a hit in all 35 of his previous road games at the Mets, the longest road hitting streak at one opponent since Joe Medwick of the St. Louis Cardinals hit in 46 consecutive games at Brooklyn from 1933-37.

Mets: RHP Noah Syndergaard, who left the opener after six innings because of a blister on the middle finger of his pitching hand, expects to start Sunday. The Mets are giving him an extra day of rest. “They don’t have to amputate it,” quipped Syndergaard, who has been putting a cream on it.

Braves: With poor weather forecast, the Braves flip-flopped their rotation and RHP Mike Foltynewicz (9-5 last year) will start Friday’s series opener at Pittsburgh. RHP R.A. Dickey (10-15 with Toronto) was pushed back to Saturday because the Braves worried his knuckleball might be less effective on a wet night.

Mets: RHP Zack Wheeler is to start Friday’s series opener against Miami, his first big league appearance since Sept. 25, 2014. Wheeler injured his elbow pitching against Miami in a spring training game on March 9, 2015, and had surgery 16 days later to repair a torn right ulnar collateral ligament.