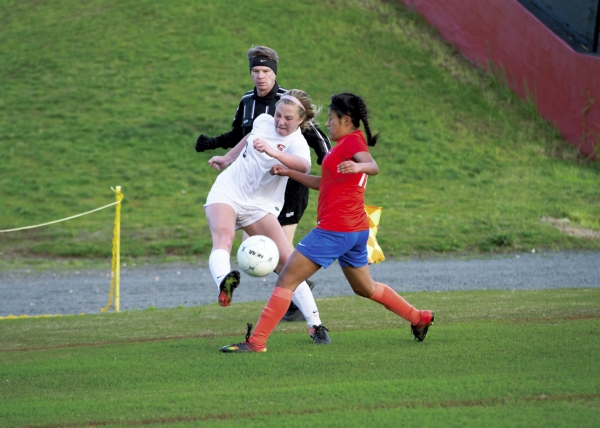 The Hornets received a goal from junior striker Emily Mann just 18 seconds into their match with visiting Lexington and scored twice in the opening 10 minutes to backbone a 5-0 Central Carolina Conference victory.

Salisbury played like a well-rehearsed orchestra, hitting all of its cues with precision. Mann and midfielder Julia Honeycutt each scored twice, senior forward Katie Bullock had three assists and keeper Juliana Anderson made four saves to help post the team’s ninth shutout.

“We pulled it together,” stopper Nellie Brown said after Salisbury outshot Lexington 15-5. “Not a lot of balls made it back to us. But it’s all about our shape in the back — and we stayed tight.”

The loss was Lexington’s first on the road. The Jackets (8-2-1, 2-2) had won eight of their previous nine matches but were stunned when Salisbury’s Anna Grace Woolly, Bullock and Mann pieced together a tic-tac-toe scoring sequence off the opening kick-off.

“They dribbled it right through us,” said first-year Lexington coach Sierra Hutchins. “Nobody talked. Nobody communicated. When you’re scored on that quick, it kind of knocks you down.”

Bullock and Mann duplicated their feat at the 9:34 mark. This time Bullock advanced the ball down the left side and centered a pass to the unguarded Mann, who fired an 8-yard shot past Lexington keeper Nancy Nolasco for her second goal of the night and sixth of the season.

“We were just really well-connected with our passes,” said Mann. “I love playing with (Bullock). We seem to work well together. She usually sends in a good ball.”

Salisbury eased off the accelerator for the middle part of the first half, but netted its third goal with less than 40 seconds on the clock. Honeycutt, who was dangerous both with and without the ball, took a feed from teammate Ceci Cardelle and drilled an 18-yard shot into the lower right corner.

“Parrish has been working with me, trying to get me to shoot it on frame,” said Honeycutt. “It was just a nice play. (Cardelle) fed it to me, I let it go, and we scored.”

Parrish believes Honeycutt — a junior who keeps getting better — is a 72-point headline waiting to happen. “When she’s on-frame, her shots go it,” he said. “She has so much power behind them. She cranks them and hits trees and barns and whatever else is around. But tonight she had two shots on-target and two shots went in. As her on-frame percentage improves, her goal totals will too.”

Salisbury added a pair of second-half goals. The first came at 23:32 when freshman Caroline Colwell converted a penalty kick after Cardelle had been mugged in front. Honeycutt scored her 14th of the season on a 25-yard blast in the final minute.

Meanwhile Salisbury’s defense — anchored by Brown, Bethanie Stauffer and Olivia Dagenhart — forced Lexington sniper Bailey Gray out of her comfort zone. The 15-goal scorer was conspicuously quiet, managing just a couple of long-range attempts before suffering a second-half ankle injury. She returned four minutes later but was never a factor.

“Whenever that girl got the ball, either Ceci or Anna Grace Woolly was there,” Parrish said. “And if she somehow got past those two, then Julie Honeycutt was there. We knew she had a big foot, that she could blast it from anywhere.”

When it ended, Parrish was reminded that his team currently resides in first place. “And it’s been a long time since you could say that,” he said. “But still, such a long way to go.”

NOTES: Salisbury has surrendered only two goals during its nine-game winning streak. The Hornets return to action Monday at Thomasville, then host North Rowan on Thursday. .. The Ludwig Stadium flag was lowered to half-mast in honor of John Glenn, the history-making astronaut and former U.S. senator who was interred yesterday at Arlington National Cemetery. He was 95 when he died Dec. 8.