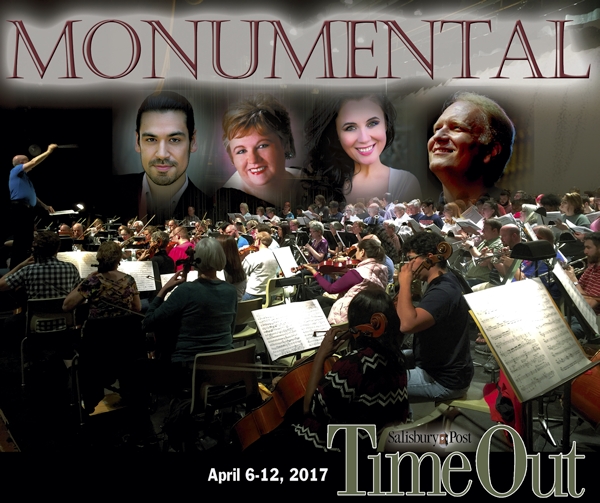 On the cover: David Hagy conducts rehearsals with the combined choirs and the Symphony.

On Sunday, April 9 at 3 p.m. the Salisbury Symphony will be performing Verdi’s Requiem with a 200-voice community choir and four seat-gripping soloists. This performance will be at Keppel Auditorium located at Catawba College.

Soprano Jasmina Halimic had a triumphant debut with the Charleston Symphony as the soprano soloist in Verdi’s Requiem and is was most recently Hanna Giawari in Lehar’s The Merry Widow with Minnesota’s North Nights Music Festival.

Mezzo-Soprano Cristy Brown has toured extensively in the Unites States and in Europe; she also sang the world premiere of composer Steven Landis’s Songs of Love and Immolation.

James Allbritten, our Tenor for the performance, is beginning his third season as general director for the Piedmont Opera after serving ten years as its artistic director.

Finally, Bass-Baritone Richard Ollarsaba has recently finished his residency with the Patrick G. and Shirley W. Ryan Opera Center at the Lyric Opera of Chicago, where he stepped into the title role in their 2014 production of Don Giovanni as well as the Majo-Domo in Capriccio.

For the full biographies of these wonderful soloists, refer to www.salisburysymphony.org

Tickets to the April 9th concert are $23.75 for adults, $6.50 for students, and $4.25 for children ages 8 and younger, and are available at Rowan County Convention & Visitors Bureau, Sidewalk Deli, Pinocchio’s (Spencer), and Crescent Pharmacy (Rockwell); also at www.salisburysymphony.org or 704-637-4314. The box office will open at 2 p.m. the afternoon of the performance.

By Marietta Smith Rail Walk Studios & Gallery is hosting a reception for “When Thoughts Become Art,” an exhibit of... read more