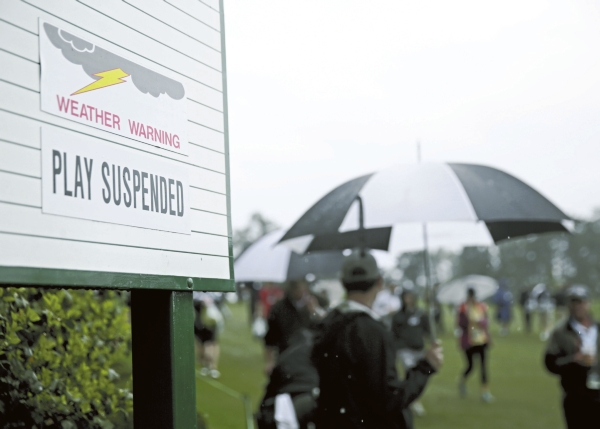 AP Photo/David Goldman A sign showing play is suspended due to weather is seen during the par three competition at the Masters golf tournament Wednesday afternoon, in Augusta, Ga. The event was scheduled to begin this morning with 8:00 tee times.

AUGUSTA, Ga. (AP) — The Masters should be the easiest to predict of golf’s four major championships.

It got a lot harder Wednesday afternoon when Dustin Johnson, the betting favorite and No. 1 player in the world, took a serious fall down a staircase at his rented home and wasn’t sure he could even tee it up at Augusta National.

His agent, David Winkle at Hambric Sports Management, said Johnson landed “very hard on his lower back.” He was treating it with ice and medication and told to remain immobile. Winkle said Johnson hopes to be able to play.

He was scheduled for the last group Thursday at 2:03 p.m.

The Westgate Las Vegas SuperBook immediately dropped the odds of Johnson winning from 11-2 to sharing the top billing at 7-1 with Jordan Spieth and Rory McIlroy.

Telling were the comments Johnson had made on Tuesday, when he was talking about the state of his game after three straight victories.

“I’ve got a lot of confidence in my game right now, especially with the way I’ve been playing the last few tournaments,” Johnson said. “But, you know, anything can happen.”

That’s true at just about every Masters, though the mishaps typically occur on the golf course.

Johnson’s status only adds to the mystery at the year’s first major.

The Masters has the smallest field, with just 94 players, and that’s before history starts eliminating about 40 percent of them.

No amateur has ever won the Masters, and five of them are in the field this year. There are 19 players at Augusta National for the first time, and not since 1979 has a Masters rookie (Fuzzy Zoeller) left with a green jacket. No one older than 46-year-old Jack Nicklaus has won the Masters, so that wipes out 11 more players.

No one has ever won his first tournament at the Masters, which doesn’t bode well for Roberto Castro or Kevin Chappell. And only three players since the Masters began in 1934 have ever won back to back. Sorry, Danny Willett.

So who does that leave?

The obvious choices would be Johnson (presuming he recovers), McIlroy or Jason Day, the top three players in the world. Impossible to overlook is Spieth, who has never finished worse than runner-up in his three Masters appearances.

But in the last 10 years, only one player from among the top three in the world ranking won the Masters — Phil Mickelson (3) in 2010.

For the second time in three days, the course was shut down for the afternoon by severe weather. Thousands of fans headed to the exit at 10 a.m. as a storm approached, and while the gates opened again at 12:30 p.m. for the Par 3 Contest, the fun was suspended an hour later when another storm arrived.

This Masters offers something for just about everyone.

For Johnson, it’s an opportunity to pronounce his dominance in the game this year. Not since Hubert Green in 1976 has a player won three straight tournaments going into the Masters. Green tied for 19th that year. The only player to make the Masters his fourth straight victory was Jimmy Demaret. That was in 1940.

For McIlroy, it’s another chance to complete the Grand Slam. He could have won the Masters six years ago until a tee shot behind the cabins, a four-putt and all sorts of blunders on the back nine led to an 80 in the final round.

Augusta National at times can favor emotion. Who can forget Ben Crenshaw winning just days after he was a pallbearer at swing coach Harvey Penick’s funeral?

That might bode well for Day, who said he wasn’t entirely sure he was going to play a few weeks ago when he brought his mother from Australia to America to have surgery for lung cancer. Odds for a recovery suddenly are much stronger, and Day has said her health has been on his mind all year.

“I owe everything to her,” Day said.

And for Spieth, there is a chance to erase a bad memory of his back-nine meltdown a year ago.

“We’ll step out and try and get a chance to win on Sunday on the back nine again,” Spieth said. “That’s all we’re asking for. That’s it. Just that small little piece.”

Johnson can only ask for a chance to play.