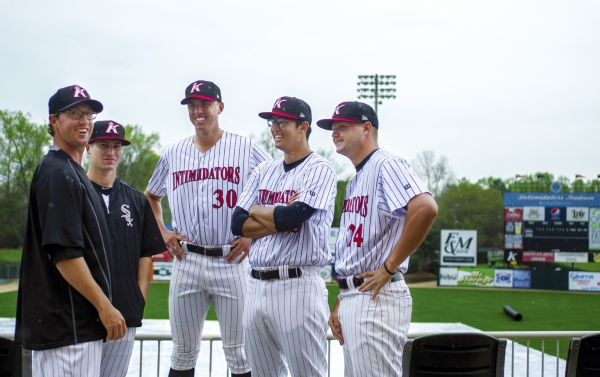 It begins with first-year manager Justin Jirschele, a 26-year old who served as the team’s hitting coach last season. A veteran of 184 minor league games in the White Sox organization, he brings a fresh face and winning pedigree. His father is Royals’ third-base coach Mike Jirschele and his brother Jerry played in the Kansas City system a decade ago.

“I’ve always liked Jirsh,” said relief pitcher Mike Morrison, one of 12 returning players on the Kannapolis roster. “And I think he’s doing a heckuva job. It’s fun to play for a guy who did what we’re trying to do.”

Then there’s the product on the field, which rarely has been better. Not since 2005, when the Intimidators won the South Atlantic League championship, has the team boasted such potential.

“It’s really a great atmosphere here,” said strong-armed outfielder Micker Adolfo. “We’ve got guys who will get the job done. We want to take this all the way home and win a championship.”

Of course, every team is talking butterflies and rainbows this time of year. But the Intimidators have a legitimate shot, thanks largely to a well-stocked pitching staff. Slender left-hander Jimmy Lambert, a fifth-round draft pick, will start tonight’s season-opener against Lakewood at Intimidators Stadium. His 2016 stats with Kannapolis aren’t impressive (0-5, 5.76 ERA in 11 starts), but he recorded 30 strikeouts in 29.2 innings and went 10-2 for Fresno State last spring.

Joining the rotation for the first time is 21-year old right-hander Alec Hansen, a second-round selection out of Oklahoma. If Jirschele and pitching coach Matt Zaleski want to see the big picture, they need look no further than the 6-foot-7 Hansen.  The Colorado native throws four pitches for strikes and used his mid-90s fastball to fan 81 batters in 54.2 innings for three teams last season.

“For me, its always been about consistently throwing strikes down in the zone,” said Hansen — who roomed with J.J. Franco, son of former Mets and Reds reliever John Franco, last year at Great Falls. “I need to keep hitters guessing and get quick outs. That’s what I focus on every day.”

Recent acquisition Dane Dunning, a first-round draft pick out of Florida (29th overall), is another pitcher with an unlimited upside. He arrived last December in the 3-for-1 trade that sent Chicago outfielder Adam Eaton to Washington. At 6-4 and 200 pounds, Dunning boasts size, power and presence and went 3-2 with a 2.02 ERA in eight starts for Class A Auburn last summer.

Lefty Bernardo Flores adds balance and finesse to the Kannapolis rotation. A 21-year old out of Southern Cal, he earned a promotion by going 6-1 with a 3.66 ERA for Great Falls a year ago. A fan of classic rock-and-roll, he threw a high school no-hitter in 2012.

The Kannapolis bullpen features Morrison — who helped Coastal Carolina win last June’s college World Series — and Long Island native Alex Katz. Morrison cut his teeth with the Intimidators last season, logging a 1-2 record with a 3.63 ERA. He appeared in 11 games, collected 18 strikeouts in 17.1 innings and held right-handed hitters to a .190 batting average — and spent the summer getting a pro baseball education.

“It’s not like college,” Morrison said. “You’ve got to pitch a little differently to these guys up here. You have to do your homework and study hitters and learn their tendencies. We call our own pitches here. In college, you better throw what the coach wants you to. As a pro, you don’t have someone holding your hand anymore.”

Katz is a hard-throwing southpaw out of St. John’s who relieved for the Intimidators and high Class A Winston-Salem in ’16. He struck out 57 batters in 55 innings and had a respectable 3.27 ERA. Last month, he pitched for Israel in the World Baseball Classic, appearing in four games and allowing no runs in 3 1/3 innings.

The Intimidators’ offense is triggered by 20-year old Adolfo, the Dominican Republic native who hit .219 with 13 doubles and 21 RBIs in a 65-game audition last season. He returns as the organization’s No. 20 overall prospect — high praise that was momentarily justified last Aug. 27 when he went 3-for-4 with a single, double, triple and two runs scored in a loss to visiting Columbia.

“I had just come back from the disabled list and was really anxious to play,” he said with a 150-watt smile. “I just wanted to get my swing back and I still remember every pitch. Last time up, I grounded out to third.”

Remillard, drafted in the 10th round last year, also played for Coastal Carolina’s national championship team. Later he hit a combined .269 with five homers, 10 doubles and 16 RBIs in 44 games with the Intimidators and the Rookie League White Sox.

“I take more of an analytical approach to baseball,” the upstate New Yorker said. “If you’re not constantly learning, you’ll probably get left behind. The good thing is they’re willing to work with you here.”

“This organization is headed in the right direction,” Remillard said. “We have guys who have that drive, that desire to succeed. Baseball matters to them.”

NOTES: The Intimidators begin their 17th season with a seven-game homestand, starting tonight against Lakewood, a Phillies’ farm team. Tickets are $5-8 in advance and $7-10 at the gate. Former major league outfielder Darryl Strawberry will sign autographs and pose for pictures in the picnic area between 7-9 p.m.