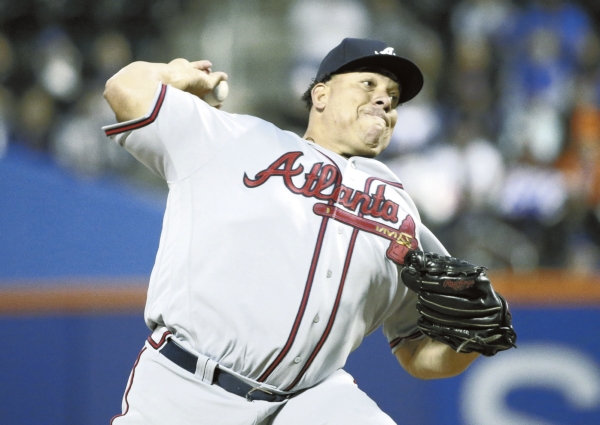 NEW YORK (AP) — Bartolo Colon enjoyed the whole evening — the nods and taps from former teammates, the tributes from the crowd.

He liked the result, too. Long after he exited, his Atlanta Braves earned their first win of the season.

Colon returned to Citi Field and made a sharp debut for his new club, and Matt Kemp’s third double of the game in the 12th inning lifted the Braves over the New York Mets 3-1 on Wednesday night.

“To be honest, I do feel at home here. We had a great relationship,” Colon said through a translator. “I definitely wanted to show my appreciation.”

Colon was perhaps the most popular Mets player over the previous three seasons. He led the team in wins, starts and innings last year, then became a free agent, left the pitching-rich Mets and signed with a guaranteed spot in the Braves’ rotation.

The Mets honored Colon with a pregame montage on the video board, highlighting his pitching, fielding and first career home run last year. Fans cheered as the clips ended with: “Welcome Back Bart.”

“How can you not like that guy?” Braves manager Brian Snitker said.

Pitching a day after the 20th anniversary of his major league debut, and now just more than a month shy of turning 44, Colon was as nifty as ever. He tossed two-hit ball — including a home run by Jay Bruce — for six innings, striking out six and walking one.

Mets manager Terry Collins had seen this plenty of times. In fact, he was managing the Angels when Colon pitched his first big league game in 1997.

“He is what he is. We sat there in about the fourth inning and we said, ‘Well, this is vintage Bartolo,’” Collins said.

Jacob deGrom threw six shutout innings for the Mets. The shaggy-haired ace needed surgery last September to reposition a nerve in his pitching elbow. He gave up two hits, struck out six and walked one.

Colon drew a standing ovation when he came to bat in the third, tipping his hat to the announced crowd of 28,113 and pointing to the sky. Earlier, Curtis Granderson nodded toward his former teammate when he hit.

Colon’s performance came after he posted an 8.66 ERA in spring training.

“When the lights come on, it’s a totally different thing,” Colon said.

HOME ON THE ROAD

Brandon Phillips singled in the 11th, giving him a hit in all 35 road games he’s played against the Mets. It’s the longest road hitting string in the majors by anyone vs. the same opponent since Ducky Medwick’s 46-gamer at Brooklyn from 1933-37.

Tim Tebow makes his regular-season debut as a Mets minor leaguer, starting in left field for the host Columbia Fireflies against Augusta in the Class A South Atlantic League. The former NFL quarterback and Heisman Trophy winner hit .148 in spring training.

Snitker took advantage of Tuesday’s day off to see his first Broadway show, “The Book of Mormon.” The long-running hit can jar some viewers, but he really liked it. He’s already preparing for an encore when Atlanta returns to New York later this month. “I’d love to see Bette Midler in ‘Hello, Dolly!’” he said. “I’ve been a fan of hers forever.”

Braves: LHP Jaime Garcia will make his Atlanta debut if the heavy rain in the forecast holds off. He was acquired from St. Louis in the offseason.

Mets: RHP Matt Harvey was 0-4 with a 5.89 ERA in five spring training starts. He didn’t pitch after July 4 last year and later had a rib removed during surgery for thoracic outlet syndrome.