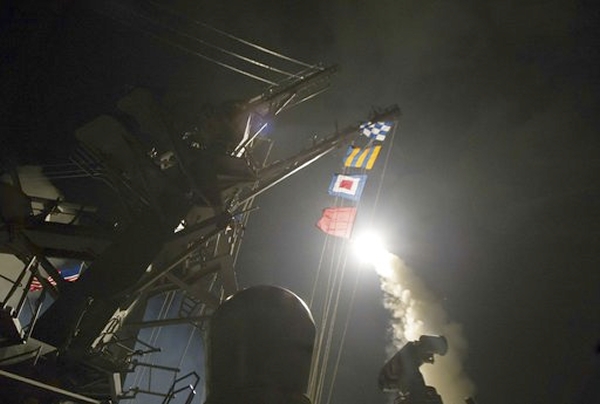 In this image provided by the U.S. Navy, the USS Ross (DDG 71) fires a tomahawk land attack missile Friday, April 7, 2017, from the Mediterranean Sea. The United States blasted a Syrian air base with a barrage of cruise missiles in fiery retaliation for this week's gruesome chemical weapons attack against civilians. (Mass Communication Specialist 3rd Class Robert S. Price/U.S. Navy via AP)

Analysis: The biggest question about attacking Assad is: What comes next?

The Washington Post
For President Donald Trump, choosing targets and launching cruise missiles to punish the Syrian regime for using chemical weapons this week may have been a relatively clear-cut decision. The big problem is what comes next.

The military had been preparing options for a strike against President Bashar Assad since well before 2013, when the Syrian dictator killed more than 1,000 of his own people in a devastating nerve agent attack.

A chemical attack Tuesday blamed on the Assad regime killed scores of civilians and has triggered a response from the Pentagon, which launched approximately 50 cruise missiles at a Syrian military airfield late on Thursday.

“The basic questions haven’t changed,” said Phil Gordon, a senior official in the Obama White House who took part in many earlier debates about how to punish Assad. “Is there a set of military strikes that you can use to degrade the Syrians’ ability to deliver chemical weapons and, if you do that, what do they do in response?”

The biggest difference between 2013, when President Barack Obama last threatened airstrikes against Assad, and today is that the risks of widening the conflict are much greater.

The initial American war plans to punish Assad in 2013 were aimed largely at his chemical weapons capability, said former U.S. officials involved in those deliberations. A direct strike on the Assad regime’s chemical weapons storage facilities was seen as too risky to civilians, because it would have produced a plume of noxious gas.

Instead military planners drew up a target list that included Assad’s chemical weapons units, and the aircraft and artillery that the regime would need to deliver the ordnance. “The intent was to strike the various chemical weapons units,” said a former U.S. official, who spoke on the condition of anonymity to discuss military planning. “We had postured our intelligence units to give us bomb damage assessments – and if we didn’t get the effect we were looking for, we would have hit them again.”

The biggest difference that Trump and his commanders confront now is the presence of Russian troops on the battlefield and Russian air defense systems that are capable of shooting down U.S. planes. Today, Russian troops are intermingled with Syrian forces, and any strike on a Syrian military target could also produce Russian military casualties.

Retired Marine Gen. John Allen, who coordinated the campaign against the Islamic State in Iraq and Syria during the Obama administration, said that the military strikes could have had a “decisive” impact on the war had they been launched in 2013. He described Obama’s decision not to strike as devastating.

“It is much harder now,” Allen said. “The United States has to ask itself a question: How angry do we want to be on this issue? Are we enraged enough morally that we are ready to take action even with the possibility of dead Russians?”

The other big worries are the Syrian and Russian air defense systems that have not targeted U.S. planes because the American aircraft are largely focused on fighting the Islamic State, a common enemy of the United States and the Syrian regime.

“Both the Syrians and Russians can act as a spoiler,” said Andrew Exum, a former senior defense official in the Obama administration. “American and coalition aircraft have flown around and through their air defense systems for the last two years. If you launched a strike against the regime, it would have every excuse to start lighting up coalition planes with antiaircraft systems.”

At a minimum, such a move by the Syrians and Russians could spook some U.S. coalition partners and cause them to pull out of the fight, Exum said.

If U.S. aircraft were shot down or forced to fire back at the Syrian and Russian radar, the United States could get pulled into the middle of Syria’s messy civil war. Such an outcome would not only put American lives at further risk, it would make the U.S. war against the Islamic State, which Trump has declared his top foreign policy priority, far more difficult.

Trump could mitigate some of those risks by assuring the Russians that the strikes are designed solely to punish Assad for using chemical weapons and not to tip the balance in the broader civil war. It is also possible that the strikes could give the United States added leverage to broker a compromise with the Russians that would end the civil war, some analysts said.

“The political message a strike would send is that you are using an approach that is completely different than the previous administration,” said Andrew Tabler, a Syria expert at the Washington Institute. Such a move would probably induce anxiety inside the Syrian regime that the United States could use to its advantage.

“Creating uncertainty and being unpredictable might get you a lot more than what the Obama administration was willing to do, which was nothing,” Tabler said.

Even as they acknowledged the big risks of a strike and their concerns about Trump’s erratic nature, some Obama administration officials urged action.

“If you don’t act, you are effectively telling Assad and the regime’s backers that you can use as much sarin as you want,” said Gordon, who served as a senior director for the Middle East in the Obama White House. “Assad tested Obama. Now there is an early test for Trump.”

Tillis: ‘Assad is a war criminal’