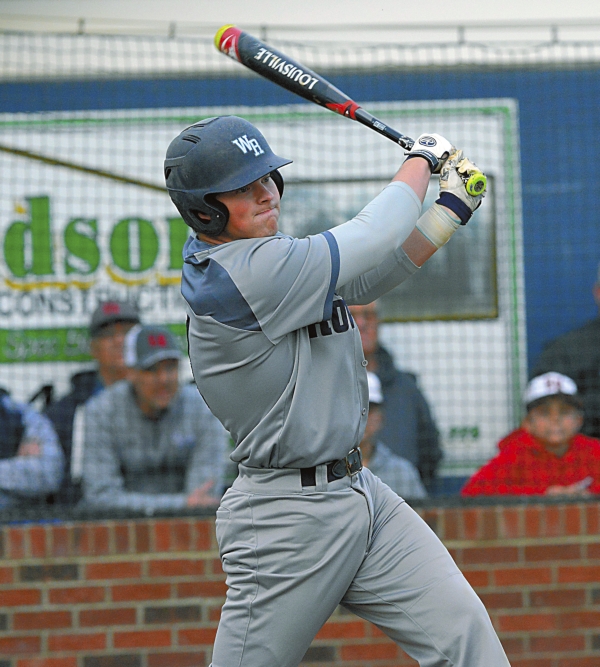 Wayne Hinshaw/for the Salisbury Post ... West Rowan’s Trevor Atwood, shown in an earlier game against East Rowan, smacked a 3-run homer and had five RBI last night in a 12-7 victory at South Rowan.

LANDIS — West Rowan’s baseball team fell down the stairs Tuesday night at South Rowan, then did a midair correction and landed safely on its feet.

The Falcons’ eighth straight SPC victory wasn’t a thing of beauty, but it lifted them into second place in the league standings.

“It was long, it was fun and there wasn’t a dull moment,” catcher Pearce Wilhelm said after West rallied for a folly-filled 12-7 win. “It doesn’t matter how we play. We can always stick around.”

West (11-3, 9-3) overcame an early 6-2 deficit, stuck its dismount and moved within a half-game of conference-leading Carson. Perhaps that’s why this one seemed like a business trip, requiring the Falcons to roll up their sleeves, get to work and get back on the bus.

“It was just very intense,” said West infielder Trevor Atwood. “We had to battle for this win.”

South (10-5, 8-4), meanwhile, had its modest two-game winning streak snapped despite collecting 10 hits — four of them for extra bases — and scoring seven times against a West team that had yielded only 22 runs all season.

West didn’t accept the donation until the top of the fourth inning, when it scored seven runs on five hits and took the lead for good. Atwood provided the April fuel by slugging a three-run homer against South reliever Matthew Donahue that broke a 6-6 tie.

Two innings later, it was Wilhelm — the team’s “Where’s Waldo” hiding behind a .205 batting average — who clobbered his first home run of the spring, drilling an 0-1 pitch from Donahue over the fence left-center field for a three-run jack.

“I’ve been struggling, but it feels good to know the coach has confidence in me,” he said. “He keeps putting me in the lineup.”

South’s lead bulged to 4-1 in the bottom of the second when infielder Austin Chrismon whipped a double to right, took third on an infield hit by Walker Joyce and scored on an error. In the third, Chrismon slapped a two-out, two-run single to right that made it 6-2.

“We strung a bunch of hits together,” said Austin Chrismon, who went 3-for-4 and cracked a too-late-to-matter home run — his second of the year — that closed the scoring. “But there was still a lot of game left at that point. We needed to do a better job responding.”

He’s right. South stranded 11 baserunners and left them loaded in both the first and fourth innings. “We had opportunities,” said Coach Chrismon. “We scored runs. But we should have scored more.”

The victory went to Stolsworth, who was anything but sharp. Teammate Brett Graham smoothed the edges and earned his first save by pitching 3 2/3 innings of two-hit relief. The hard-throwing right-hander struck out eight and walked one.

“Brett has good stuff and can do that for us if we need him to,” Coach Graham said after West earned a split in its season series with South. “But overall, we didn’t pitch it too good and we didn’t make some plays. The offense bailed us out tonight. It was due to bail us out.”

Tar Heels get it right this time, bring home…