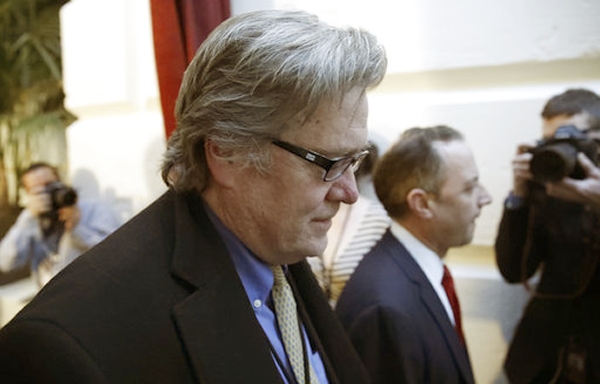 A new memorandum about the council’s composition was published Wednesday in the Federal Register. The memo no longer lists the chief strategist as a member of the Principals Committee, a group of high-ranking officials who meet to discuss pressing national security priorities.

Tom Bossert, the assistant to the president for homeland security and counterterrorism, also had his role downgraded as part of the changes.

A senior White House official said Wednesday that Bannon was initially placed on the National Security Council after Trump’s inauguration as a measure to ensure implementation of the president’s vision, including efforts to downsize and streamline operations at the NSC.

Trump’s first national security adviser, Michael Flynn, was at the helm of the NSC at the time, but the official said Bannon’s role had nothing to do with the troubles facing Flynn, who was asked to resign in early February for misleading the administration about his communication with Russian officials.

Flynn’s replacement, Lt. Gen. H.R. McMaster, was given free rein to reorganize the NSC as he saw fit. McMaster immediately expressing a desire to run a less hierarchical organization and be more accessible to his staff, something that created widespread frustration when Flynn was in charge, according to three current and former administration officials familiar with the changes.

As a participant of the Principals Committee, Bannon would have had the authority to call a vote if the president’s vision for the NSC was not being implemented. The committee, which includes top officials from various government agencies, meets regularly to address important policy issues.

The official said Bannon’s removal from the NSC was not a reflection of any change in his standing as one of Trump’s closest advisers. Bannon will maintain his security clearance as is standard for most top West Wing officials.

Trump’s White House is facing allegations that it funneled secret intelligence reports to a Republican congressman leading an investigation into his campaign’s possible ties to Russian officials as well as Moscow’s interference in the 2016 election.

The New York Times last week identified two NSC officials as having helped House intelligence committee chairman Devin Nunes view secret reports. A U.S. official confirmed to The Associated Press that Ezra Cohen-Watnick had access to those kinds of intelligence materials, but maintained he did not play a role in helping the congressman gain access the documents. The official pointed instead to the other official named in The New York Times report, Michael Ellis, a White House lawyer who previously worked for Nunes on the House committee.

Senior administration officials said McMaster was out of town when these revelations occurred.

The senior White House official would not comment on who was responsible for the changes, but said they were a reflection of the confidence the president has in McMaster and were not in response to the recent controversy linked to the NSC.

The officials spoke anonymously because they were not authorized to discuss the changes or other details that have not been formally announced.

The new memo also restores the director of national intelligence and the chairman of the Joint Chiefs of Staff to the principals committee.

Bannon’s addition to the NSC sparked concerns from Trump critics, who said it was inappropriate for the political adviser to play a role in national security matters.

By Josh Bergeron josh.bergeron@salisburypost.com SALISBURY — The City Council on Tuesday picked 10 local business leaders to serve on a... read more