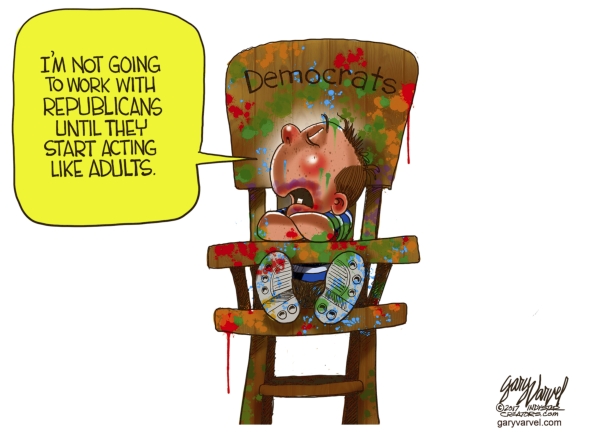 The party of ‘No’

Ah, the joys of doing nothing. Republicans must remember them fondly, as they struggle with the difficulties of actually designing real-world bills that have to get past the Senate, and y’know, not hideously offend large numbers of voters.

Democrats, meanwhile, are discovering the sweet, toddler-like joys of just saying “no” to everything. Help Republicans repeal Obamacare? Heck no. Quietly stand by while Republicans approve an eminently qualified nominee to the Supreme Court? No, no, no!

After years of failing at the grown-up business of passing legislation, small wonder the Democrats would like to let the Republicans have a try at being the adults in the room. In politics, saying “no” is a great deal of fun.

Besides, that’s where the electorate seems to be right now. Right after the election, when I was on vacation in Asia, I predicted on Facebook that we’d see Democrats investing in increasingly counterproductive obstructionism, simply because that was what the base was going to want:

“Liberals have been very fond of arguing that [conservative] elites somehow encouraged the growth of these destabilizing influences by not shutting down … well, name your candidate: right-wing talk radio, the tea party, obstructionist forces in Congress, Donald Trump. Liberals are about to find out what those Republicans have long known: they had no power to shut them down. All the tools they might have used had been taken away decades ago, mostly by progressives.

“For exactly the same structural forces are at work on the left. Things fall apart; the center cannot hold. Those forces have been masked by Democratic possession of the presidency, which is a unifying force far out of proportion to its actual usefulness. As long as your party holds the White House, you feel like you have a shot at getting things done, and you are willing to cut a great deal of slack to your leadership. Prepare to see Republicans get a lot quieter and more cooperative, and the obstreperous forces on the left to get angrier and more intransigent.”

So far this prediction has pretty much been borne out. The base wants a filibuster of Neil Gorsuch’s nomination to the Supreme Court, even though there is literally no possible tangible end that can be achieved thereby — and even though it may indeed make it harder to block Trump nominees in the future. For instance some future truly awful Supreme Court nominee, one for whom Republicans wouldn’t be willing to rewrite Senate rules in order to overcome a filibuster threat.

At the moment, of course, the empty gesture of blocking Gorsuch is delighting many on the left, who finally feel like their party has grown a spine. If this follows the pattern that evolved on the right, however, that feeling will turn out to be increasingly costly.

With the Tea Party, Republican moderates initially imagined that they had found something like the crazy partner in a cop buddy film — the one who could be used to threaten suspects into acting against their own self-interest by saying: “Look, he’s crazy. He could do anything, and I just don’t know how long I can hold him back!”

But then the mainstream lawmakers discovered that their partner’s craziness wasn’t an act. The Tea Party helped them secure some victories, yes. But then Crazy Mac cost them control of the Senate, engaged in grandstanding ploys with no obvious payoff, and took the focus off of Obamacare at its moment of greatest vulnerability. They had no control over their crazy “partner,” and that partner cost them more potential victories than it delivered.

Democrats may end up experiencing the same thing. Democrats desperately need to become competitive again outside of a handful of urban agglomerations, not just because their rural failures cost them the presidency, but also because of all the other offices they’ve lost at every level of government below the White House.

But making themselves more competitive is probably going to require that Democrats back away from an immigration position that was skirting dangerously close to “open borders,” and placing less focus on identity politics. If they try to do this, their base will (correctly) perceive themselves losing power and status in the party, and they will be incandescent. Their first priority will be extracting signals of loyalty to themselves, not winning elections … and if the Republican experience is any guide, they may well get what they want.

McArdle is a Bloomberg View columnist.

Laurels to the University of North Carolina’s men’s basketball team and the perseverance that propelled the team to the 2017... read more