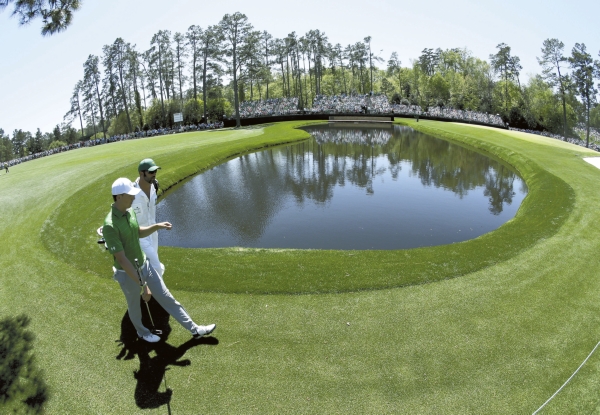 Jordan Spieth walks to the 15th green with his caddie during a practice round for the Masters golf tournament Tuesday, April 4, 2017, in Augusta, Ga. (AP Photo/Charlie Riedel)

AUGUSTA, Ga. (AP) — On a warm, sunny afternoon in Amen Corner, Jordan Spieth stepped up to No. 12 and stuck it right next to the flag.

A year too late.

“I really could’ve used that one 12 months ago,” Spieth quipped Tuesday, mustering a smile before heading over the Hogan Bridge to take care of a tap-in delivered with an Arnold Palmer-like flourish.

But for anyone who takes a bit of self-deprecation during a practice round as a sign that Spieth has gotten over the green jacket that got away, think again.

The sting is still there.

You can hear it in his voice.

“Certainly you don’t want to hold stuff in,” Spieth said. “That would be crazy.”

If not for a meltdown at the shortest hole on the course, a mere 155 yards, the 23-year-old would’ve been talking Tuesday about his quest to become the first player to win the Masters three years in a row.

Instead, he was reminiscing again about the biggest disappointment of his young, flourishing career.

In 2016, Spieth made the turn on the final day with a commanding five-shot lead. He gave away some of that cushion with back-to-back bogeys at the 10th and 11th, but it was at the par-3 12th, the devilish little hole known as Golden Bell, that he lost the tournament .

First, he splashed his tee shot into Rae’s Creek. Then, from the drop zone, he chunked another one into the water. Just like that, he was on the way to a quadruple-bogey 7 that ensured it would always be one of those Masters remembered more for how it was lost than how it was won. (In case you’ve forgotten, the beneficiary of Spieth’s collapse was England’s Danny Willett , who is the first to acknowledge “it was a strange one last year.”)

Back in December, when Spieth returned to Augusta National for the first time since that fateful day to play a round with friends, he was thinking about what happened on the last day of the Masters. When he played the 12th on Tuesday, in front of a large gallery but merely for practice, it was on his mind again.

When the tournament begins, he expects more of the same.

“It will surely be there and it has been there,” said Spieth, wearing a green shirt that would be a perfect match for the jacket he hopes to don again on Sunday. “It is one of the many tournaments I’ve lost given a certain performance on a hole or a stretch of holes. It happens in this game. I stepped up today, first day back with the crowds, and hit it to about (a foot away), which is nice. Obviously, it’s not the tournament.”

While the 12th will always be a part of Spieth’s story at the Masters, his feel for this place is far more positive than negative.

He’s played this tournament three times and never finished lower than second. This is where he captured his first major with a dominating 18-under score in 2015, sparking a run at the Grand Slam and one of the greatest years in golf history.

Even the hole where it all fell apart has provided plenty of good vibes. Before the finale a year ago, Spieth had played Golden Bell at 1-under through his first 11 rounds at the Masters, including three birdies.

“I really thoroughly enjoy this place and this week,” he insisted. “I seem to have more fun each year when I play this golf course.”

Spieth’s enthusiasm got more pronounced when asked specifically what makes this course so appealing to him.

“I like the elevation changes, the sidehill lies, the pull to Rae’s Creek,” he said, not even pausing for humorous effect. “It’s imaginative golf. It’s feel golf. I really enjoy that. When I go away from technical and toward feel, it’s an advantage for me.”

He certainly looks like one of the players to beat this week, even though he ceded the No. 1 spot in the world rankings to Dustin Johnson .

No one doubts that Spieth will get another shot at the green jacket.

“I’m excited about the opportunity ahead, which is now I can go back and really tear this golf course up … really create more great memories on the back nine of Augusta,” he said. “If it happens this year, fantastic. I will do all I can to see all the positives and grind it out like we did in 2015. And if it doesn’t happen this year, then I’ll be ready the next year to do it.”

When Spieth made that little joke Tuesday at the 12th, it felt like a cathartic moment.

But he’s not afraid of Amen Corner.

“Looking forward to getting out there,” he said, sounding a bit defiant, “and taking it right over the bunker just like my strategy for any other hole.”