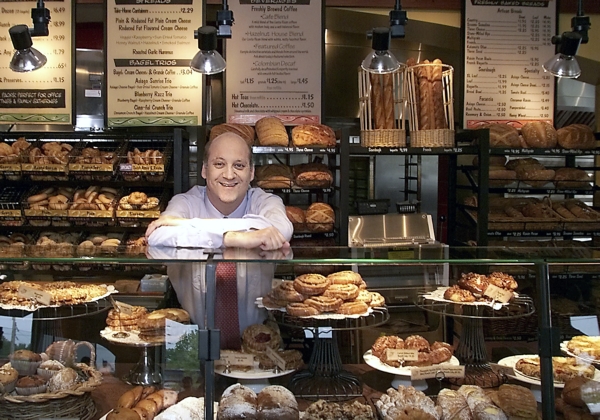 Panera Bread Co. CEO Ron Shaich stands behind a counter at a location in St. Louis. Shaich says he plans to stay on as chief executive after the sale of his company. He added that customers shouldn’t see any changes as a result of the chain’s sale, and that he’s staying on as its leader. (AP Photo/Tom Gannam, File)

Panera investors will receive $315 per share in cash, the companies said in a statement Wednesday. That’s 20 percent higher than the closing price on March 31, the last trading day before Bloomberg reported Panera was considering a sale after receiving interest.

The agreement includes assumption of $340 million in debt. Panera shares rose as much as 13 percent to $310 in pre-market trading.

JAB has expanded its coffee business rapidly after an initial 2012 purchase of a stake in Amsterdam-based D.E Master Blenders 1753, the maker of Senseo and Douwe Egberts brands.

Closely held JAB, which is backed by the billionaire Reimann family of Austria and also controls cosmetics maker Coty Inc., is encroaching on the territory of Starbucks Corp., which was the first company to express takeover interest for Panera, two people familiar with the situation have told Bloomberg.

In the U.S., JAB has developed a portfolio of co-branded restaurants called Coffee & Bagels, offering Caribou java and Einstein Bros. bagels. The planned addition of Panera pushes the food conglomerate in a new direction, giving it greater access to the lunch and dinner crowd.

The bakery chain, which operates more than 2,000 cafes across the U.S. and Canada, has grown steadily in recent years from a single store in Boston, becoming one of the largest operators in the fast casual segment. In the fiscal first quarter, comparable net bakery-cafe sales increased 5.3 percent from a year earlier, Panera said in pre-announcing results on Wednesday. Over the past 20 years its shares have multiplied their value by 90.

“We are pleased to join with JAB, a private investor with an equally long-term perspective, as well as a deep commitment to our strategic plan,” Panera founder Ron Shaich said in the statement.

The purchase is expected to close in the third quarter, subject to shareholder and regulatory approvals, the companies said. Shaich and entities affiliated with him have agreed to vote shares representing a 15.5 percent stake in favor, they added.