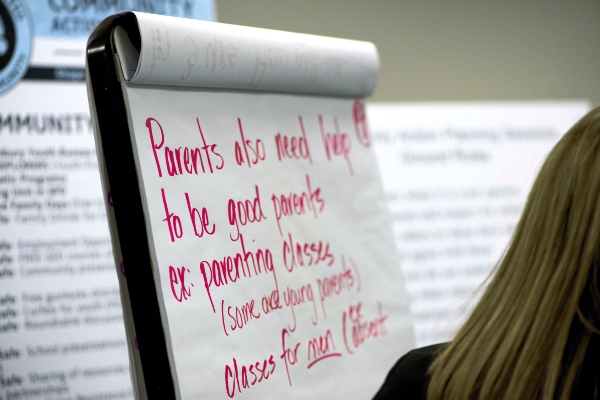 Editorial: Meetings of the minds on crime Two series of meetings in Salisbury this spring — one planned by citizens, the other by officials — at first ran the risk of competing with each other. Both seek ways to reduce crime and violence and improve life in the city. Now that the meetings have started, though, it’s clear that the problem is big enough to make room for anyone who will offer up an idea.

• Stop the Violence: Al Heggins, Women for Community Justice and the NAACP got the conversation started with the Stop the Violence Summit on March 18. At their second gathering on Saturday, Police Chief Jerry Stokes presented a crime report that prompted discussion about gangs and violence. A third meeting is scheduled from 9 a.m. to noon on Saturday, April 22, to come up with short- and long-term action plans.

• Community Action Planning Sessions: Action is also the goal of the Community Action Planning Sessions sponsored by Salisbury, Rowan County and Rowan-Salisbury Schools. The first session, held Monday, drew a lot of government and school employees and individuals who have taken on the role of “ambassador” for the city. Three more are scheduled this month in different areas of the city to encourage wide participation.

The sessions focus on four areas — children’s opportunities, community relations, workforce development and public safety. The facilitator is building on Salisbury’s 2007 gang summit, prompted by the death of 13-year-old Treasure Feamster. The violent killing of a child sparked this year’s meetings, too. Seven-year-old A’yanna Allen was shot to death in her bed on Dec. 4 by a drive-by assassin, capping a year that had already seen too much bloodshed.

That tragedy removed any doubt that Salisbury needed to confront its complex crime problem. But some of the ideas can be as simple as these from one group’s charts Monday: “increasing male involvement” and “parenting classes.”

The remaining Community Action Planning Sessions will be held:

Yet a third meeting held in recent weeks spoke to problems challenging us:

• Literacy Summit: It is not a stretch to say inability to read and write can contribute to criminal activity. The Literacy Summit led on March 10 by the school system focused on a topic that is integral to the survival of our young people — and, indeed, of our town.

So far, 2017 is shaping up as a year of revival for Salisbury and Rowan County. We have owned up to the crime problem and are seeking solutions. The test will be working together to take concrete actions.

Within a matter of days, two people were struck and killed last week while walking along Rowan County roads. Their... read more