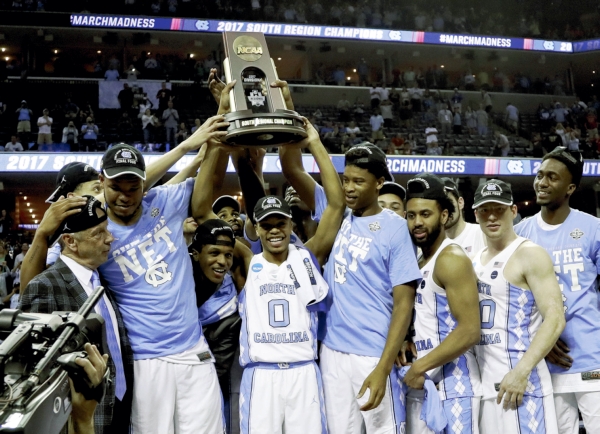 Laurels to the University of North Carolina’s men’s basketball team and the perseverance that propelled the team to the 2017 NCAA Basketball Championship. Coach Roy Williams and the Tar Heels indeed redeemed themselves after 2016’s heart-breaking loss, but victory was far from easy and often in doubt. A legendary basketball program has to prove itself over and over to preserve its status, and the Tar Heels came through in rough-and-tumble style on Monday. The game was ugly, as Williams said, but the Heels did what they had to do to win.

One unexpected byproduct of the championship drive was the adoption of an errant phrase from former UNC basketball great Michael Jordan. Speaking during halftime at the UNC-Duke game last month, Jordan said, “The ceiling is the roof.”  Much fun was made of his slip-up; Jordan obviously meant the sky is the limit. But now his words are enshrined on championship T-shirts, with an addendum — “Ceiling. Roof. Banner.” They may be forever entwined with the Tar Heels’ 2017 championship.

Dart to an incident at a Charlotte greenway that evidently will prompt a greater police presence. A woman was attacked by a knife-wielding man who tried to sexually assault her at the entrance to the McAlpine Greenway Park last week, police said. The Charlotte-Mecklenburg Police Department has since announced it will increase patrols on greenways. In fact, Chief Kerr Putney wants to create a new division dedicated to greenways, light rail and the airport.

In Rowan County, officials resisted becoming part of the Carolina Thread Trail for several years, partly for security reasons. Their primary concern was property rights, but they also warned that crime could become a problem on greenways. The Charlotte attack and others like it seem to reinforce greenway opponents’ doubts, but greenways’ benefits far outweigh any negatives. The paths encourage people to go outdoors, appreciate nature and get some exercise. As the Nature Conservancy says, “Nature saves lives.”