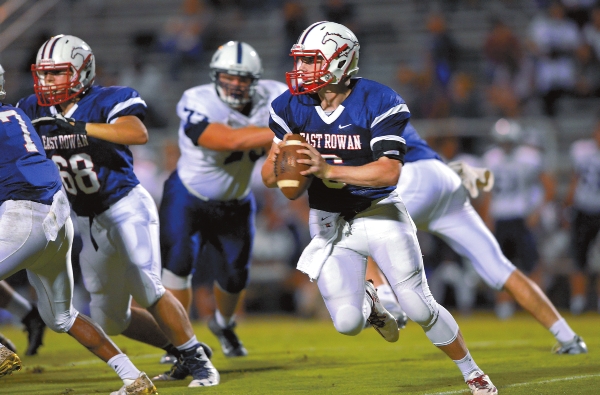 Wayne Hinshaw/for the Salisbury Post ... East Rowan quarterback Tate Houpe (6) is shown during a game last season against Hickory Ridge. Houpe, who also punted for the Mustangs, has announced that he will continue his education and football career at Appalachian State. “I’ve been fortunate to learn a lot about the punting craft from him,” said Houpe, a good student who plans to major in business or finance at ASU.
Houpe will have lots of competition for the punting job from Rylee Critcher, Bentlee’s younger brother, starting kicker Michael Rubino and Xavier Subotsch, a former Australian rules football player.
But it’s wide open, and all Houpe is asking for is a fair shot.
Houpe averaged 34 yards per punt as a senior. There were some impressive bombs, but he wasn’t always consistent. He’s confident consistency can be found as a full-time punter.
“Almost all of my practice time in high school was spent at quarterback,” Houpe said. “Now that I’m working exclusively on punting, I can see myself  getting  better.”
You Might Like