Tar Heels get it right this time, bring home the title 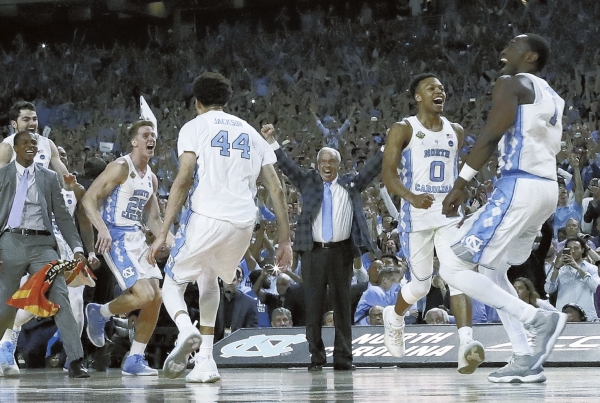 GLENDALE, Ariz. — For a whole year, the North Carolina Tar Heels wondered if they’d get another chance.
For a whole year, the Tar Heels thought about what might have been.
When Monday night’s slugfest with Gonzaga came to a merciful end, the Heels had all their answers: The national title was theirs, the nets were hanging around their necks, the redemption tour was a success.
Their 71-65 win will not be mistaken for a work of art. But for anyone who bleeds Carolina Blue, it sure was a thing of beauty.
“This is what we worked for,” junior guard Joel Berry II said. “And the ups and downs we’ve had? It’s all worth it.”
The story starts with the downs. When Villanova’s Kris Jenkins hit his 3-pointer at the buzzer to beat Carolina in the 2016 final, coach Roy Williams buckled over like a man who’d just been punched in the gut, put both hands on his knees and tried to figure out to explain it.
“The feeling of inadequacy in the locker room last year is the worst feeling I’ve ever had,” Williams said.
What ensued was a year of working harder, doing more, making sure That didn’t happen again.
With 1:40 left in the final, Justin Jackson took a laser of a pass from Theo Pinson and laid it in while being fouled. He made the free throw, and that 3-point play gave the Tar Heels a 66-65 lead.
Gonzaga didn’t score again, though in a game that left fans from both sides booing a spate of over-officious officiating, the game couldn’t be settled without a controversial (non)call in the last minute.
Leading by 1, and in a scrum under the Carolina basket, Tar Heels forward Kennedy Meeks went to the floor to try to wrestle the ball away from Silas Melson. Refs called a jump ball, and with the possession arrow favoring North Carolina, the Tar Heels converted on an Isaiah Hicks runner to push the lead to 3. Replays and pictures, retweeted and reposted thousands of times on social media, showed Meeks’ right hand touching out of bounds.
But there was no protest, no review.
“Probably on me,” said Gonzaga coach Mark Few, whose first knowledge of the call came in the postgame press conference. “From my angle, it didn’t look like an out of bounds situation or I would have called a review. That’s tough to hear.”
Through NCAA spokesman David Worlock, national coordinator of basketball officials JD Collins said the play was not reviewable.
Neither Few nor Williams threw much blame toward the officials, but the refs made this game virtually unwatchable.
They called 27 fouls in the second half and put both teams in the bonus with 13-plus minutes left. They left the big men — Meeks and Gonzaga’s 7-footers Przemek Karnowski and Zach Collins — among those languishing on the bench in foul trouble. They stifled any bit of flow that existed in the game and turned it into a review-driven free-throw contest. They brought steady cascades of boos from the crowd of 76,168, as fans from each side took turns protesting the whistles.
“It’s a very difficult game to call,” said Williams, who has now led the Tar Heels to three of the program’s six titles. “I’m sitting over there, I’m not thinking the officials are doing a terrible job. … I’m thinking our offense stinks.”
He had a point.
Carolina shot 35 percent from the field, a percentage point worse than it did in Saturday’s semifinal win over Oregon, which stood, for two days, as their worst shooting night in a tournament win since 1967.
Some of the culprits: Berry led the Tar Heels with 22 points but needed 19 shots to get there. Jackson had 16 points but went 0 for 9 from 3-point range. Pinson went 2 for 9.
Gonzaga’s numbers were even worse — 20 for 59 for 33.9 percent. Nigel Williams-Goss scored 8 straight points for the Bulldogs to give them their last lead — 65-63 with 1:52 left.
Moments later, Williams-Goss twisted his ankle and neither he nor anyone on his team would score again.
“To be so close for us is a temporarily crushing blow right now,” Few said. “But I’m hoping and knowing that perspective will come with time.”
At Gonzaga — a program on fantastic footing thanks to two decades’ worth of building led by Few — they’ll regroup and reload and try to finish the deal next year.
Few, both a coaching and card-playing buddy of Williams, might be tempted to give Ol’ Roy a call and ask him how he did it.
“They wanted redemption,” Williams explained. “I put it on the locker room up on the board — one of the things we had to be tonight was tough enough. I think this group was tough enough tonight.”