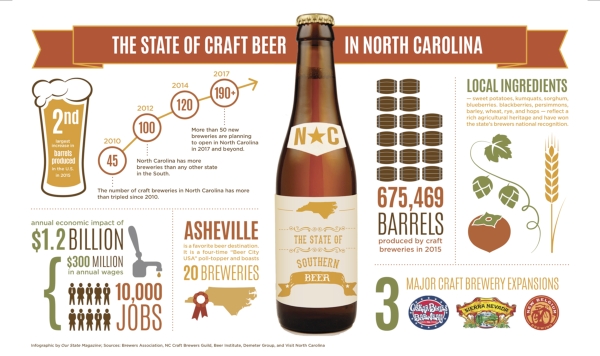 April is Beer Month in North Carolina, and celebrations will be held across the state, including Salisbury, where Morgan Ridge Railwalk Brewery & Eatery and New Sarum Brewery have already started the fun.

If you want to venture outside of Rowan County after you’ve filled up on Lee Street Wheat or some Roundhouse Robust Porter, you have plenty of options.

A website, www.ncbeermonth.com, offers a list of events, participating venues, travel deals and more so you can travel around the state sipping brews for the entire month.

More than 100 breweries are taking part in the celebration, with more than 70 events planned. The Raleigh-Durahm-Chapel Hill area will be hopping (pun intended) and the mountains, from Asheville to Boone, will bubble over with tastings, special foods and activities.

Here’s how the website describes the Salisbury scene: “Discover the kinda’ country, kinda’ cool you’ve been craving at New Sarum Brewing Company and Morgan Ridge RailWalk Brewery & Eatery in downtown Salisbury. These original, hometown breweries provide a relief from the larger metros and are conveniently located between Charlotte and the Triad. While you’re in town, grab a cold one at Salty Caper, Go Burrito, Mambo Grill and Firehouse Brew Pit or pick up a six pack at the Salisbury Wine Shop. Be sure to come back in August for “Summer Sip,” downtown Salisbury’s annual craft beer tasting crawl.”

If you don’t want to venture too far, listen to this pitch for Cabarrus County: Motorsports heritage is rooted in moonshine, so the heart of racing country is no stranger to craft beverage. Cabarrus County is home to the ultimate motorsports experience and storytelling brews. In the seven years since Robert Burrage founded Lil’ Robert’s in Concord, breweries have multiplied offerings that connect with Cabarrus history and adventure. Take Reed’s Gold from Cabarrus Brewing — named for America’s first discovery of the precious metal and best experienced after touring mine tunnels. Ready to raise ’em up? Stop by the Cabarrus County Visitors Bureau for a free #RaceToTaste coaster key ring, which doubles as a functional list of local spots to sip.

At the breweries, you can pick up a Pint Hound Passport (available at Morgan Ridge and New Sarum) and sniff out the best craft beers from across the state. The more brews you try, the more prizes you can win.

There are 108 participating North Carolina breweries this year, and you can collect a passport stamp at each brewery you visit during the month of April. Download and print your Pint Hound Passport now, or pick up a free copy from a participating brewery.

And there’s more! All valid passport submissions will be entered into a drawing to win a $500 Yeti Cooler Prize Package, courtesy of the Great Outdoor Provision Co. You can also visit a North Carolina-based GOPC store near you to get a stamp that will count toward your Pint Hound prize earnings.

You must be 21 or older to pick up a passport. No purchase necessary. To collect your prize, submit your passport by uploading it to bit.ly/ncbeerpassport or mailing it to NC Beer Passport, PO Box 27921, Raleigh, NC 27611. Have fun and don’t forget your Pint Hound designated driver. Valid if submitted/postmarked by May 1 and while supplies last.

And if all that is not enough for you, take note:

BEER NC is a new app from Our State magazine dedicated to helping you explore the growing craft beer scene in North Carolina. The app features every brewery in the state and is constantly updated. You can search for, save, and check in to breweries. BEER NC also has curated guides to breweries that fit your interests, such as breweries for runners, breweries near water, etc.

“Our State is excited to celebrate craft beer in North Carolina with the launch of our new BEER NC app,” says Bernie Mann, publisher of the magazine.