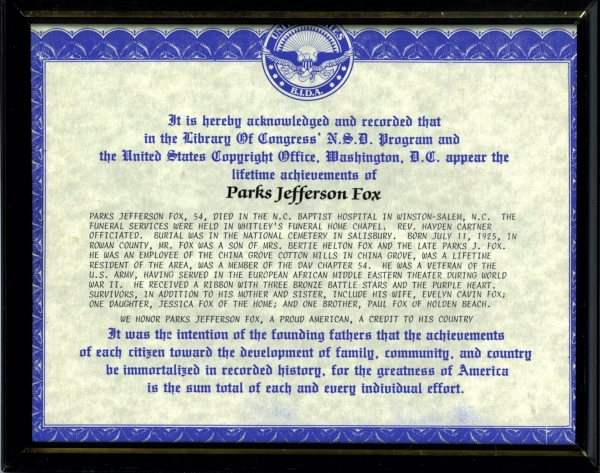 Yesterday: A certificate and a mystery

This is an unusual ‘Yesterday’ offering, but there’s a little bit of intrigue associated with it. Mary Sechler found the framed certificate above in an Earl Street home in Kannapolis that was being cleaned out for the arrival of a new family. ‘I didn’t want it to be put in the trash,’ Mary says. It looks to be a certificate acknowledging the lifetime achievements of a man named Parks Jefferson Fox. It notes Fox was born July 11, 1925, in Rowan County and died at N.C. Baptist Hospital in Winston-Salem when he was 54. He is buried at the Salisbury National Cemetery. He was a World War II U.S. Army veteran, serving in Europe and Africa. He received the Purple Heart and a ribbon with three bronze battle stars. The certificate says he was a lifelong resident of this area, an employee of China Grove Cotton Mill and a member of the DAV Chapter 54. Survivors listed on the certificate at the time of his death included Evelyn Cavin Fox, his wife; a daughter, Jessica; and a brother, Paul Fox, of Holden Beach. Sechler says she would love to give the certificate to family members because ‘it’s something they might treasure.’  She can be contacted at 704-905-2353.