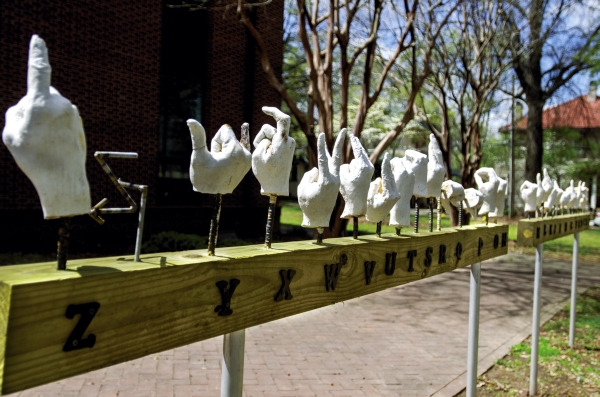 KRISTI CRAVEN/ SALISBURY POST Stephen Hayes' sculpture 'Communicate' (Alphabets 1&2) was installed at the Library in Downtown Salisbury for the 2017 Sculpture Show on March 31, 2017. SALISBURY — Charles Pilkey calls his painted steel sculpture next to the Trolley Barn “A Question of Balance.”

And you can see why. Everything about the sculpture is in balance, yet teetering and close to falling apart.

The seven figures populating the piece all seem to be preoccupied with their cellphones, whether it’s the guy at the bottom painting from a ladder, or the man on top skateboarding to work while carrying his briefcase in one hand and cellphone in another.

“It’s my revenge on the cellphone users,” says Pilkey, who lives in Mint Hill and has two installations in this year’s Salisbury Sculpture Show. “My point is, technology is good, but you have to restrain its use. You don’t have to use it every day.”

It concerns Pilkey, for example, that some 3,000 traffic deaths a year can be attributed to drivers or pedestrians on their electronic devices, not paying attention to where they’re going.

Pieces for the ninth Salisbury Sculpture Show were installed throughout the city late last week — most of them Thursday and Friday. In all, there are 12 artists and 18 sculptures, including a holdover from last year — Richard Pitts’ “Candle” on Hogan’s Alley.

“They liked it, and they didn’t want to let it go,” Pitts said.

With its annual show, the Salisbury Public Art Committee provides Salisburians and visitors to the city pieces of public art they can enjoy for many months to come.

The sculptures stay in place for much of the year. Judging for Best in Show ($1,500) and second- ($750) and third-place ($500) prizes won’t come until late summer or early fall. There usually is a Citizens Choice Award, too.

The show provides a good opportunity for the artists chosen to display and possibly sell their works. Many pieces from past shows have been purchased, including several which have become part of the local landscape.

Sculptor Jim Gallucci of Greensboro is a familiar sculptor to Salisburians thanks to his participation in the shows from the beginning.

“Every year, it’s like an event,” Gallucci said Friday night during a reception for the artists at the home of Susan and Edward Norvell. “The venues fight over who gets what.”

For this year’s show, the selection committee chose Gallucci’s “Oak Leaf Shade” bench as one of the pieces. It has been installed outside the front entrance to Rowan Public Library.

Alyssa Nelson, urban design planner for the city, worked closely with the sculptors, venues and installers this year on behalf of the Public Art Committee. Retired Senior Planner Lynn Raker provided some help, and veteran installers such as Randy Goodman assisted once more.

Goodman said the process went well this year, and at times, installations were even ahead of schedule.

Pitts, who lives and works in Pennsylvania, has his “Solar Totems” being displayed at Rowan-Cabarrus Community College. The brushed aluminum totems are an environmentally themed nod to the sun and solar energy.

Pitts had high praise for the kind of sculpture show Salisbury offers and how it enriches both the community and the artists. More communities are picking up on Salisbury’s example.

“People are beginning to see what happens when art gets into the environment,” Pitts said.

Pilkey said Salisbury has “an outstanding show on many levels.”

He liked that the Public Art Committee provides a reception in which the sculptors can meet each other. Pilkey also appreciates the juxtaposition Salisbury provides in placing modern art within a well-preserved, antebellum town in the Piedmont.

Overall, Pilkey thinks the annual shows give a general education to the public on modern art.

While “A Question of Balance” will prompt discussion, Pilkey says Salisburians shouldn’t overlook “Ark,” his kinetic sculpture at the Catawba College Center for the Environment. It represents a future space ark, what Pilkey sees as the kind of vessel civilization’s few survivors will use for their escape when this planet is worn out.

Here’s a rundown of the 2017 sculptures and the artists:

Yesterday: A certificate and a mystery

This is an unusual ‘Yesterday’ offering, but there’s a little bit of intrigue associated with it. Mary Sechler found the... read more