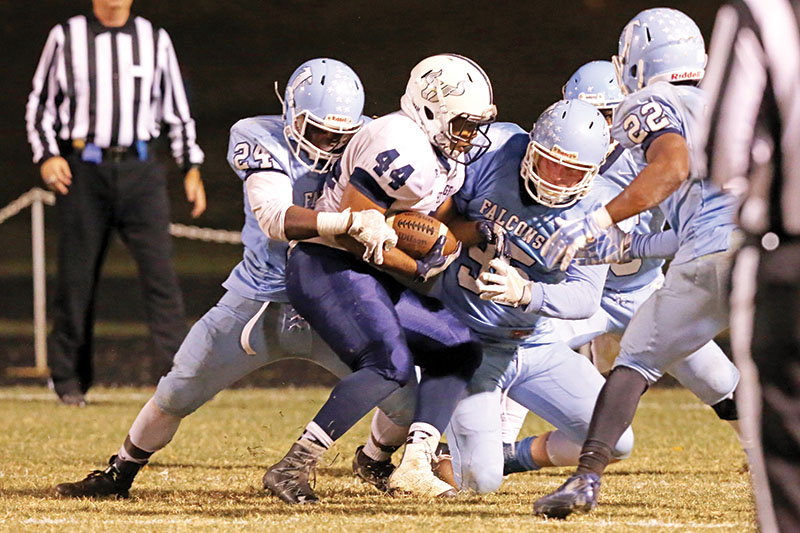 West Rowan’s Miles Poteat (24) and Tyler Wheeler (95) stop Hickory Ridge’s Jeremiah Boyd (44) on the two-yard-line during a game on Nov. 14, 2016. Wheeler will play football for Louisburg in the fall. Photo by James Sipes, for the Salisbury Post.

MOUNT ULLA — There were 33 schools playing college football in the state of North Carolina in 2016 at some level.

Only one of those 33 went undefeated. That was the Louisburg College Hurricanes. They went 9-0 against a wide assortment of prep schools, jayvee programs and four-year colleges.

West Rowan High defensive lineman Tyler Wheeler wants to help Louisburg go undefeated again next fall. Louisburg, located east of the Raleigh/Durham area and two hours and some change from Salisbury, will be the next destination for the 6-foot-5, 260-pound Wheeler. He signed last week, as family, teammates, friends and coaches looked on in West’s media center.

Wheeler is a friendly guy with a big smile and a firm handshake and readily admits he hasn’t done as well in the classroom as he would’ve liked. That’s why he’s headed to Louisburg, the state’s lone two-year college with a football program.

His teammates at Louisburg will be athletes who share the same hopes and dreams as Wheeler. They’re talented players who took a wrong turn or came up short academically somewhere along the line in high school. Most of them probably believed they were so good grades wouldn’t matter, but grades always matter.

“This is a blessing,” Wheeler said. “I didn’t do great in school, but now I’ve been given a second chance. It’s another chance to pull my grades up. I love the game of football, and now I’ll get to keep on playing while I work on my grades.”

Wheeler is a fine athlete. He decided to play baseball as a junior and went 2-0 as a pitcher. While he looks like a prototype offensive lineman, West used him as a defensive end because he’s mobile as well as strong. He’s run a 4.9 40. He’s bench-pressed 315 pounds.

“Tyler’s got the size, he’s got the length every college coach is looking for, and he’s got the ability,” West head coach Joe Nixon said. “The sky is the limit.”

Wheeler entered his junior season for the Falcons as a backup, but he surprised people. He kept making plays and forced his way into the starting lineup.

“He was good enough as a junior that we knew we could count on him for a lot more as a senior,” Nixon said. “We knew we didn’t have to worry about his position.”

Wheeler turned in a stellar senior season with exceptional games against Carson, Cox Mill and Concord.

He was one of nine Falcons who made All-South Piedmont Conference. He was second team All-Rowan County, but defensive line was the county’s strongest position.

“I hit head-to-head with Hickory Ridge’s running back, and I probably got a concussion from that,” Wheeler said. “On the next play I slipped, went down on my knees, and I collided with that guy again.”

Wheeler tore a meniscus. Combined with the concussion, the knee injury kept him out the rest of the season. West was hopeful initially that Wheeler might be able to return to duty, but physicians were understandably cautious.

“It killed me not to be able to play in the playoffs,’ Wheeler said. “Getting hurt on Senior Night was so terrible.”

He was imposing enough as a senior that he drew attention from Division I football programs such as Appalachian State and Coastal Carolina, but his grades weren’t sharp enough to sustain their interest.

Wheeler’s fallback plan was to go to St. Andrews, an NAIA school that will be making its football debut next fall. He would’ve been reunited there with his friend and former West quarterback Kacey Otto.

But then, out of the blue, Wheeler got an e-mail from Louisburg. His plans took a detour.

“It kind of happened with Louisburg at the last minute,” Wheeler said. “But I couldn’t be happier with how things worked out. I took a visit and really loved it. The coaches and players made me feel at home.”

One of those coaches is offensive coordinator Will Orbin, who has made Louisburg one of the highest-scoring junior colleges in the country. Orbin was Rowan County Coach of the Year after he coached East Rowan High to unexpected success — including a win against A.L. Brown — in 2004.

Louisburg’s head coach is Trevor Highfield, who has a background in Division I coaching. Highfield played in the Rose Bowl as an offensive lineman for the University of Washington.

Louisburg has a practice field carved out of the woods. Players must tackle a substantial hike from their locker rooms down to the field.

There’s no football stadium. When the Hurricanes play a home game, it’s at the local high school. They do make interesting road trips. Last season they went to Annapolis, Md. and won against the Navy jayvees.

Louisburg product Sam Mobley was a game-changing receiver for Catawba College in 2016, making 31 catches for a team-leading 667 yards and four touchdowns.

Wheeler could have similar success. It’s a matter of him putting in the work, earning the grades, and then moving on to a four-year school.

“We’re excited about the opportunity Tyler has,” Nixon said. “We believe in him.”