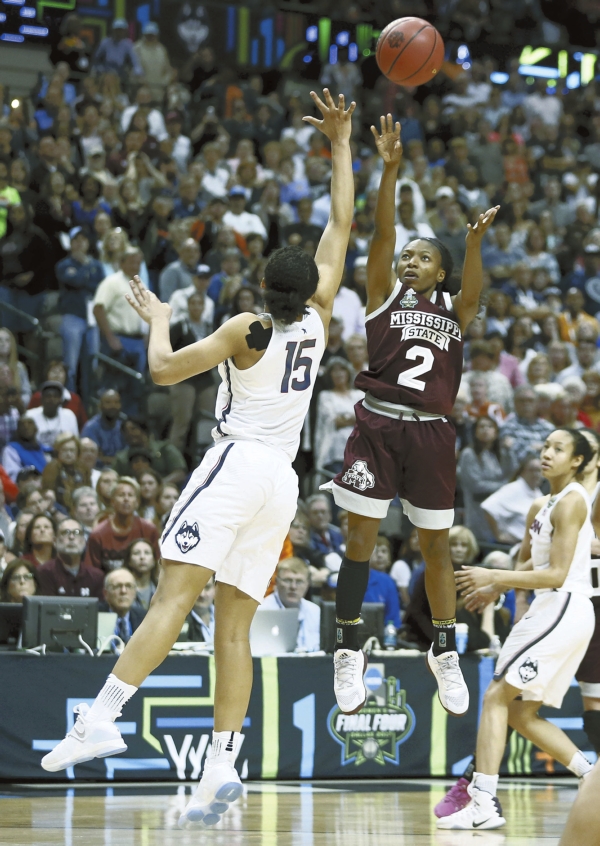 DALLAS (AP) — Vic Schaefer and his Mississippi State Bulldogs didn’t get much time to celebrate what might be the greatest shocker in women’s basketball history.

“They’re really grounded. Our kids know what’s coming down the pike,” he said. “They know now the prize now is in front of them; it’s attainable. We have one heck of a team to get ready for, a tremendous staff. They’re really, really good. But it’s down to the two of us.”

Right after Morgan William hit the winner to end UConn’s 111-game winning streak, the Bulldogs dogpiled at center court as if they had won the school’s first title.

“It felt like the national championship last night,” Mississippi State star Dominique Dillingham said. “But I promise you it’ll be a lot better tomorrow when we win.”

It would be even sweeter to beat the Gamecocks to do it.

The Bulldogs lost twice to the Gamecocks this year, dropping a game in South Carolina in the regular season and then in the SEC Tournament title game.

While facing a familiar foe is helpful for the short turnaround, South Carolina coach Dawn Staley knows Mississippi State is a different team from the one the Gamecocks played a month ago.

“It does make it easier. … but for what Mississippi State has done over the past five games, you know, they’re much different than they were that sixth game in which we played them in the SEC Tournament championship,” Staley said. “Morgan William is playing some of the best basketball I’ve ever seen played in a player.”

William followed a career-best 41-point performance in the regional final, hitting the 15-footer against the Huskies.

A couple of tidbits for Sunday’s game:

CONFERENCE DOMINANCE: This is the sixth time in NCAA Tournament history that teams from the same conference will play for the national championship. It’s the third time for the SEC with Tennessee beating Auburn in 1989 and the Lady Vols topping Georgia in 1996. Maryland beat Duke in an ACC showdown in 2006 and UConn routed Louisville in 2009 and 2013 when both were still in the Big East.

TAKING DOWN THE TOP SEEDS: Mississippi State is looking to be the third team in NCAA history to beat three No. 1 seeds. Tennessee did it in 1987 en route to its first title. Louisiana Tech accomplished the same feat a year later. The Bulldogs have already knocked off top-seed Baylor and shocked No. 1 UConn to get to the championship game.

MISSING ALAINA: South Carolina center Alaina Coates will be watching from afar. She injured her ankle in the SEC Tournament and hasn’t been with the team at the Stockton Regional or in Dallas for the Final Four.

“Our medical staff thought it was best if she didn’t travel,” coach Dawn Staley said. “She’s got a bright future in basketball at the next level and we don’t want to risk setting it back potentially with her coming here instead of rehabbing.”