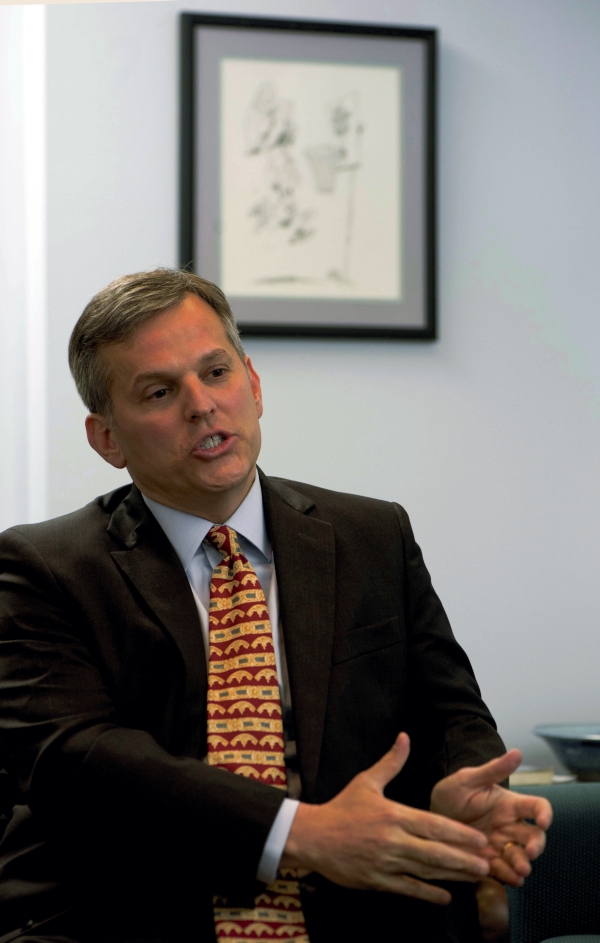 SALISBURY — Josh Stein returned to familiar territory when he took the oath of office as North Carolina’s new attorney general.

The Raleigh Democrat worked in the state’s Department of Justice several years before being elected to the state Senate in 2008. He won a close race for attorney general in 2016, one of the few Democrats to win a spot on the Council of State. He received 50.27 percent of the vote to Republican Buck Newton’s 49.73 percent.

Stein stopped in at the Salisbury Post recently on his way to Gastonia, where local officials were putting on an event focused on the opioid epidemic. The attorney general has taken particular interest in the issue, joining with a bipartisan group of lawmakers to push for the Strengthen Opioid Misuse Prevention bill — the STOP Act.

The STOP Act calls for more controls on prescribing and dispensing opioids. Doctors would have to review system data to examine a patient’s history to prevent overprescribing and also would be limited to giving 5- or 7-day supplies for initial treatment of acute pain.

It also calls for funding more treatment and recovery facilities and wider distribution of the overdose-reversal drug, naloxone.

The bill cleared a House panel last week, with some revisions, and so far has won wide support. State Sen. Tom McInnis, R-Rockingham, who represents part of Rowan County, is among the bill’s primary sponsors.

In a Q&A with the Post’s Mark Wineka and Elizabeth Cook, Stein touched on subjects ranging from opioids to voter I.D. and gangs. Here is an edited transcript of the interview:

Q: How does a Democratic attorney general get along with a Republican legislature?

You focus on the issues that affect people’s lives and you can try to break through that partisan divide. I’m not naive; it won’t happen all the time, but there are issues where we can do that. I feel like we’ve been having some success.

Q: Is the opioid issue one of those?

A: Yes, it is, because opioid addiction doesn’t ask if you’re Democrat or Republican. It doesn’t ask if you’re rich or poor, black or white, urban or rural. It just comes and grabs ahold of you and takes over control of your life. I’ve been very encouraged by the leadership in the legislature embracing our trying to come up with a comprehensive solution.

Q: Have you heard any feedback from physicians?

A: We have. In fact, the leading House sponsor is a physician, a surgeon named Greg Murphy from Pitt County. So we’ve worked with the Medical Society, the Medical Board.

The Medical Board has endorsed the legislation. The Medical Society has been very constructive, and they’re supportive of the aims of the legislation. They just want to be sure that it works well and that it doesn’t create challenges to their ability to serve patients. I think we’re going to eventually get to the place where they are enthusiastic supporters.

Q: What do you think will happen with the 2013 voting law?

A: I can’t predict what the Supreme Court will do. My hope is that they dismiss it. … The Fourth Circuit unanimously determined that the law targeted African-Americans, the quote was, “with almost surgical precision,” to make it harder for them to vote.

All these reforms that North Carolina had enacted in recent decades to make it easier for legitimate voters to participate were being abolished, and the sad thing is that those reforms have worked, In the 1984, North Carolina was 48th in voter participation in the presidential election, in terms of the percentage of eligible voters who voted. By 2008 we were 11th, which to me is a good thing for democracy.

Q: Is there a way to require a photo I.D. that would not be discriminatory?

A: I think so. There are ways to ensure the integrity of the vote, and I support that. We have to have faith that our elections are both free and fair. But whatever we do can’t be a pretext for making it harder for certain populations to vote. …

These digital cameras make it so easy. What you could do is ask for people’s ID, and if they don’t have an ID, but they’re otherwise valid voters, take a picture of them with a digital camera to attach to their voter file. So that, if anyone challenges the legitimacy of that vote, there’s actually a physical record of who that person is. Then the next time they come to vote, there will be a photo. There are plenty of people who don’t have driver’s licenses.

Q: Is any state doing that now, taking pictures of voters?

Q: There were times when then-Attorney General Cooper refused to defend some state laws. Do you see yourself in that position some day?

Q: When you come visit a newspaper like us, will you head down to the courthouse?

A: Sometimes I do. We’re actually on the way to Gastonia immediately from here so we won’t have that opportunity today. … We’re having a forum with city and county elected leadership and law enforcement, as well as some treatment and recovery folks, to talk about the opioid crisis.

Gaston County in particular has taken it on the chin. They had the fifth-highest number of opioid deaths over the last 15 years, when they’re not the 5th most populous. They’re really struggling with this and coming up with some interesting policy solutions, so I want to go down there and learn from them what they’re doing.

Q: The head of the local emergency department spoke at Rotary recently and mentioned higher-than-normal psychiatric needs here. He said he was actually referring to the opioid problem.

A. The VA is here, right? … There’s hardly any more physically demanding occupation than being a soldier, and so it’s not uncommon that they get the opioids to deal with the pain but in the process become addicted. And once they’re out, they have to deal with that legacy of addiction.

Q: Are there enough treatment facilities?

A. Absolutely not. I’ve talked to the Sheriff’s Association, the Chiefs of Police Association, the Metro Mayors, and to each group I said, “I want a show of hands if you don’t have enough facilities,” and it’s been almost the entire room in every instance. That’s one reason why, in the STOP Act, there’s $20 million over two years to fund new community treatment and recovery services. Opioid addiction is an illness, and we have to help people get well, get healthy. That requires treatment and recovery. It’s a lifelong illness, similar to diabetes.

Q: As small as Salisbury is, we actually have problems with gangs and violence. … Is that unusual for us to experience that?

A: I don’t think so, sadly. And there is an intersection between the gang activity and the drug addiction, because drugs end up being central to gang culture and gang economics. It is very imperative for us to help people get well so that we’re reducing the demand for these illicit drugs, which help to finance gang operations.

Q: Are opioids part of the gang problem?

A: Absolutely. Importing heroin from Mexico … that is a key element of gang culture and economics. It’s a real fundamental issue, and a lot of it comes down to economics, and do you have economic opportunity for young people that they feel is a realistic prospect?