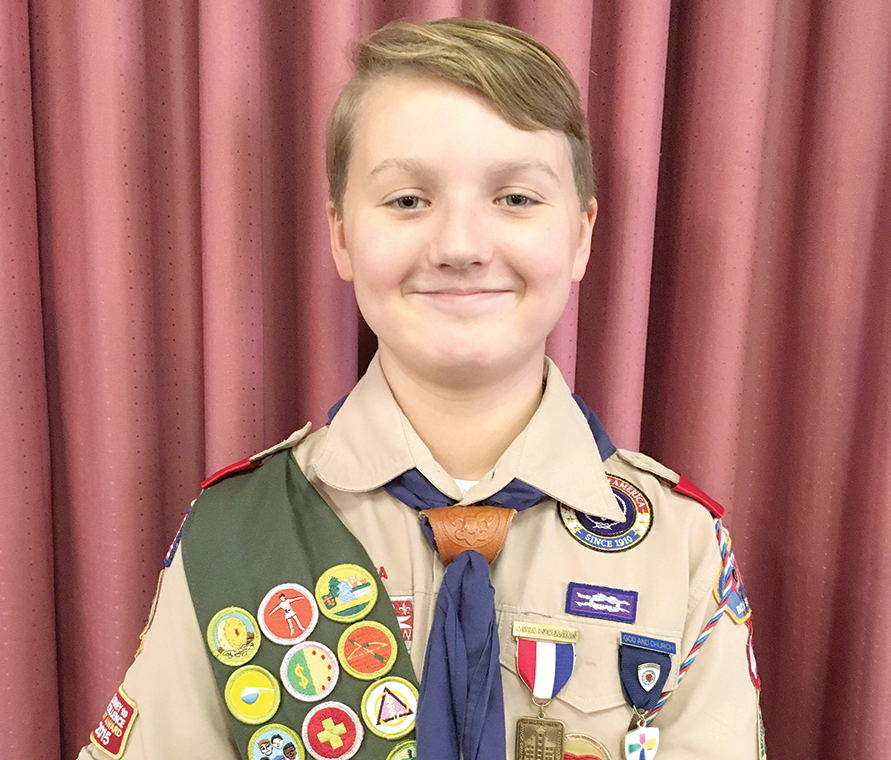 Landon joined Cub Scout Pack 306, sponsored by North Hills Christian School, in June 2009 as a Tiger Cub Scout. During the next five years, he earned his Bobcat, Tiger, Wolf, Bear and Webelos badges. Landon has also earned the Cub Schout religious awards God and Me and God and Family. As a Webelos Scout, he earned the Super Achiever Award for earning every Cub Scout Activity Pin. In February 2012, Landon earned the Arrow of Light Award, the highest rank in Cub Scouting.

Landon joined Boy Scout Troop 443, sponsored by St. John’s Lutheran Church, in February 2014 and earned Tenderfoot, Second Class and First Class ranks during his first year. After completing the required merit badges and two service projects, he was awarded the ranks of Star, Life and Eagle between 2015 and 2017.

For his Eagle Project, Landon organized a group of volunteers to landscape several areas at Tyro Middle School. He pruned existing trees, planted shrubs and trees and weeded all of the plant beds. The project included over 19 people and over 79 service hours from scouts, friends and family.

During his Scout tenure, Landon has served as Patrol Leader, Historian, Den Chief (Cub Pack 306), Assistant Senior Patrol Leader and Senior Patrol Leader. He has earned 27 merit badges, Toting chip, Fireman chip, Cyber chip, Salisbury Historic Trail Award, World Conservation, Den Chief Service Award, Fish and Wildlife Conservation Award and God and Church religious award (12/13/15). Troop 443 honored Landon by giving him the Scout Spirit Award in 2014 and 2016. Landon has attended Summer Camp at Camp John J. Barnhardt. In 2014, 2015 and 2016, his patrol earned the National Patrol Award. In February 2016, Landon was elected to and joined the Order of the Arrow, BSA’s National Honor Society for experienced campers. He is currently an Odeal member of the Order of the Arrow.

Landon is an 8th-grader at Tyro Middle School. He is an “A” honor student and a member of the band. He is also a member of St. John’s Lutheran Church and is active in the Middle School youth group and has served as a Banner Bearer, Crucifer, Torch Bearer, Element Bearer and Usher during church services.

Landon is the son of Ryan and Stephanie Mesimer and  the grandson of Harold and Susan Mesimer and Raymond and Linda Bostian.