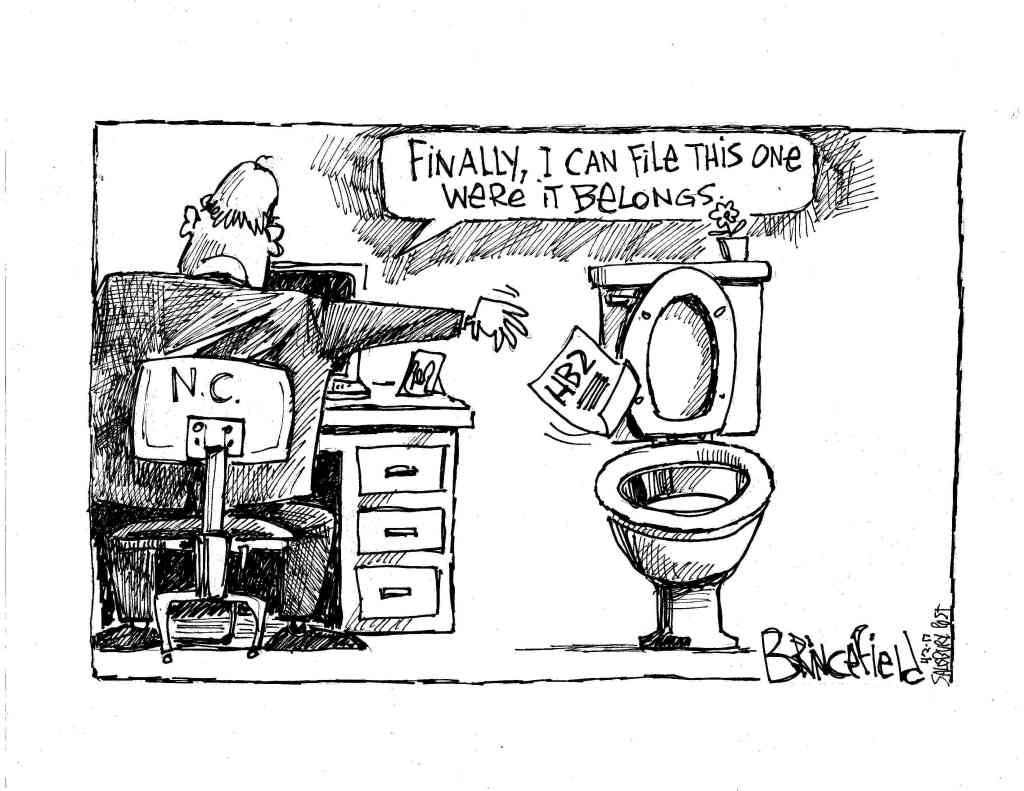 The take-away from North Carolina’s HB2 ordeal is a rallying cry for activists who don’t like the way North Carolina is being run.

Long ago, a thick-skinned editor shared his standard for political stories: If you make both sides mad, you must be doing something right.

By that measure, the General Assembly and Gov. Roy Cooper were on the right track on House Bill 142. People on both ends of the political spectrum disliked the compromise bill that Cooper signed into law on Thursday.

Civil rights activists say the governor sold out the gay and transgender community.

Christian activists believe lawmakers who supported the compromise are more interested in serving mammon — and the NCAA — than God.

Take it from Rep. Carl Ford of China Grove.

“If I could use props, I’d roll a basketball covered in money down the aisle,” Ford said during the House floor debate. As for him and his family, he said, they were not for sale.

One of the sad facts of our age is the penchant for staking out absolute stances where there can be no middle ground. This is exactly the kind of divisiveness that  delights enemies of democracy. Sprinkle a bit of salt on our moral-issue wounds, and Americans are quick to denounce each other and, ultimately, the government we so freely elect.

The transgender bathroom issue put the state in a no-win situation. Though the people on the far right and far left were eager to take up the fight, the conflict left a lot of North Carolinians in the middle, cringing. Is this what we want our state to be known for?

Charlotte City Council started the debate with a law most of the state was not ready to deal with. Weren’t transgender people already using the bathrooms of their choice?

Then the General Assembly overreacted with a law that took away that choice and trampled on nearly everyone’s rights in some way.

The big lie about transgender bathroom choice was that it would allow or encourage bathroom assaults — as if transgender rights equated with criminal activity.

But, regardless of how respectful and law-abiding a transgender person is, what about the naked reality of high school locker rooms and showers?

Some questions were not so easy to answer.

Caught in the middle were people that many of us find hard to identify with — men and women whose sex does not match their gender identity.

During a Trans Conversations Educational Forum held here last June, a panel member said telling loved ones about the decision to transition was difficult.

“I’ve watched people who loved me at one point turn their back on me,” the panelist said. “You’re still the same person … But what I’m not going to be is fake anymore.”

What does the compromise bill do for that earnest person? It lifts the mandate that transgender people stick to the sex on their birth certificate when a choosing a public bathroom, as HB2 stipulated. But the new law offers them no protection, nor any recognition of LGBTQ rights. Only the state can make laws concerning multiple occupancy restrooms and showers under this law, and there’s a moratorium on local ordinances regulating public accommodations or private employment practices until Dec. 1, 2020.

For now, let’s focus on two dates in 2018: May 8 and Nov. 6. That’s when North Carolina will hold the next primaries and elections for legislators.

The repeal of HB2 was neither sweeping nor satisfying, but North Carolina had to get out from under the “bathroom bill” cloud. The NCAA provided both an incentive and a deadline. The compromise bill was the best deal the governor could work out with the conservative Republicans who dominate the General Assembly.

Most Republican legislators won re-election handily in 2016. Fifty-three of the 170 lawmakers had no opposition at all, and several more sailed through easy primaries without Democratic opposition. The Republicans’ redistricting map is ingenious.

But conservatism has its limits, and HB2 shone a bright light on them. In a bid to ward off the unknown and protect conservative sensibilities, lawmakers hastily threw together a law that drew ridicule, repelled business and embarrassed the state.

The good news is that comedians and national pundits don’t always get into the details. The message most of the nation heard was that North Carolina got rid of its much-maligned bathroom bill. Case closed, as far as they’re concerned.

North Carolinians know better, of course. The compromise bill was far from a clean repeal. The only way to fix the situation is at the ballot box, but first the state will need more legislative candidates. Lawmakers who run unopposed can do whatever they want.