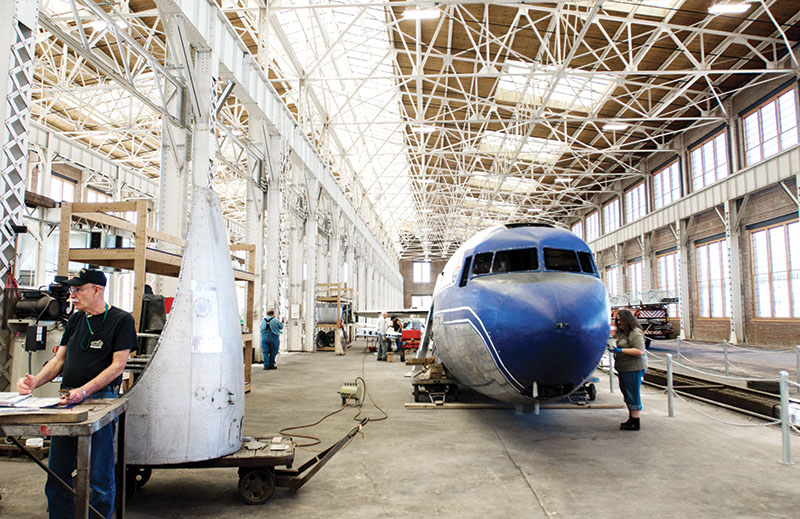 KRISTI CRAVEN/ SALISBURY POST A DC-3 airplane is being worked on at the North Carolina Transportation Museum in Spencer on April 1, 2017.

Littlejohn, a 10-year-old ball of energy, couldn’t contain his excitement on Saturday as he was surrounded by planes, flight simulators and other aviation activities. Inside of the N.C. Transportation Museum, Littlejohn bounded from table to table to see what each had to offer.

The N.C. Transportation Museum is best known for its displays of trains, but on Saturday the museum showed off aviation-related displays.

Littlejohn said he wants to be a pilot when he grows up. In particular, he’s got his sights set on becoming a military pilot who flies fighter jets. His reasoning is simple.

“They’re cool and they’ve got guns on them,” Littlejohn said.

He said flight simulators were his favorite display. Littlejohn said he also liked remote controlled airplanes being flown inside of the N.C. Transportation Museum’s backshop. Later, he became engrossed in an activity that challenged museum visitors to build a device that could float between two red lines in a wind tunnel.

Littlejohn and his family members were just a few of the many people who filed into the N.C. Transportation Museum’s aviation-focused event — Learning to Fly. One day earlier, more than 900 children and teachers filed through the museum to get a sneak peak at aviation day exhibits.

A replica Wright Flyer was among the many displays. Elizabeth Duncan, dressed as aviator Amelia Earhart, and Theresa Pierce was dressed as Katharine Wright, a high school teacher and sister of aviation pioneers Wilbur and Orville Wright. In their costumes, Duncan and Pierce spoke with museum visitors near the Wright Flyer. WWII aviation uniforms were also on display. Peter Meyer donned the 1940s-era uniforms and told stories about his father, a pilot during WWII. Wake Forest Baptist Health AirCare landed a helicopter at the museum for visitors to look at.

A Piedmont Airlines plane, known as the Potomac Pacemaker, was the largest single item on display. For the past several years, volunteers have worked carefully to assemble and restore the aircraft, which was manufactured in 1942, retired in 1965, obtained in 1978 by the Museum of Life and Science in Durham and purchased in 2004 by the N.C. Transportation Museum.

Walt Ryerson served in the Navy as an aircraft electrician and also flew airplanes professionally. On Saturday, Ryerson was among a number of volunteers working to restore the plane as museum visitors passed by. Twice per month, volunteers gather to restore the aircraft.

Ryerson said the plane won’t ever fly again, but the goal is to restore both the interior and exterior to the glory of its flying days.

“We want to get to the point where a mechanic who comes in here and is retired says ‘OK, that looks like it should,” Ryerson said.

He said working to restore the plane is fun and compared it to tinkering with classic cars.

“Some people have their fun working on a hot rod, but I get mine working on an airplane,” he said.

For others who volunteer to restore the plane, it’s a learning experience.

High school sophomore Delaina Yancey, from Cornelius, says she wants to be a commercial pilot for Emirates — an airline company based in Dubai, a city in the United Arab Emirates. Aviation is her happy place, Yancey said.

Working nearby was Anthony Eugene Paupaw, a 58-year-old who is scheduled to graduate from Guilford Technical Community College this year. For years, Paupaw was a truck driver. When he was laid off in 2013, he decided to go back to school. Helping assemble the plane provides real-world experience, he said.

Once complete, Kevin Cherry, Deputy Secretary of the N.C. Department of Natural and Cultural Resources, said the Potomac Pacemaker will be a representation of a historically significant airplane.

North Carolina Transportation Museum Director Kelly Alexander said the Potomac Pacemaker eventually will be part of its own permanent exhibit about the importance of flight.

The museum may be known for its trains, but it’s not the only kind of transportation Alexander said she hopes visitors can experience.

“Everybody knows us for trains, but we want people to be able to experience all kinds of inland transportation here,” she said.