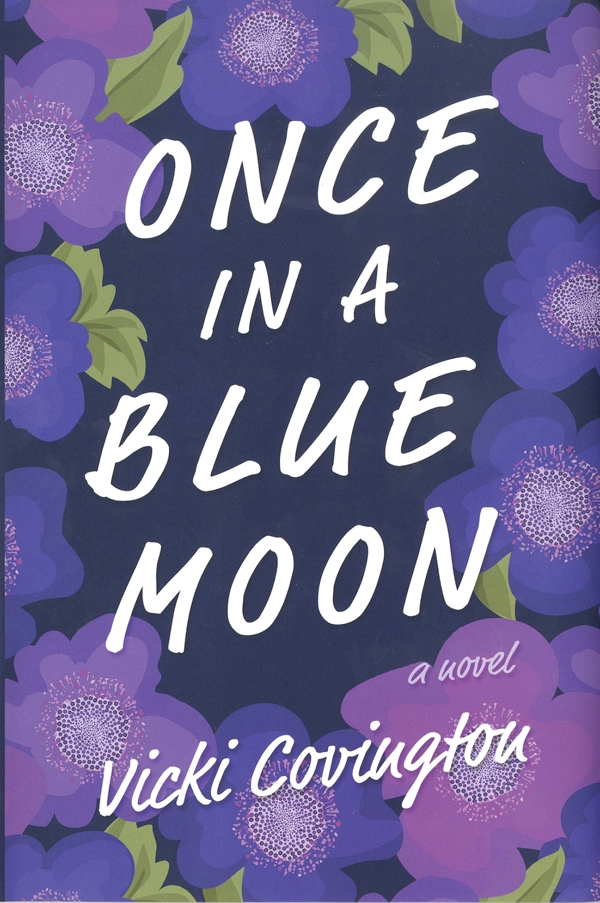 ‘Once in a Blue Moon,’ life falls into place

In a world where novels often feature man’s inhumanity to man, Vicki Covington’s “Once in a Blue Moon” is based on kindness and hope.

A thin thread of the Obama campaign provides some of the hope, gives this jumbled group of people something to agree on, but that’s just one of the subplots.

And that’s mostly what this slim book is, a collection of subplots tied together by a street, Cullom Street in Birmingham, Ala.  And by a kind landlord, Abraham Kasir, who treats his tenants like family — maybe even better.

It begins with the story of how Mr. Kasir came to own the houses on Cullom Street, which is a real street in Birmingham, and just as the story tells, near Red Mountain and the largest cast iron statue in the world, Vulcan, from the 1904 World’s Fair.

Covington is a native of Birmingham and has a special affection for the city, and it seems, this neighborhood, but we don’t know if her view of it is realistic.

The first tenant the reader meets is Landon, a recent divorcee, unemployed psychologist with bipolar disorder, coming to terms with the end of her marriage, the loss of her house and her grown up and gone away daughters.

Landon is a saver, so she comes with lots of literal baggage, trying to recreate the nest she was tossed out of.

Her upstairs neighbor, Abi, introduces herself. Abi is younger, a waitress, with a probing glare. She is the product of a poor trailer park, but now waits tables at a chic restaurant and is going to college.

Abi reluctantly visits her parents, dislikes her mother intensely, and worries about her father, who has cancer. He wants Abi to help him get some marijuana for the nausea of chemotherapy.

Down the street is Sam, a handsome man who does pretty well selling weed. His beloved grandfather, Poppy is a retired preacher who quotes scripture easily and appropriately to the situation.

And we meet Jet, who has an education and works in a bookstore. She often dresses in black and has a crush on Sam, who already has a beautiful girlfriend. Readers quickly learn about how complicated Jet’s family is and why she seems angry at the world.

But most of the book is about Landon and Abi. Jet goes through a crisis  that makes her confront her family problems head-on. Where there is potential for disaster, Covington brings love and understanding into a strained relationship.

In fact, throughout the book, the author takes the road to happiness. Is that realistic? Sometimes. Not everything has to end badly, though the problems these folks have could overwhelm them.

And Covington tests religion as a thread through the neighbors. Abi does not believe in anything and is shocked when her father tells her he is “saved.”

Landon is religious, but she does not go to church. Jet was saved from prostitution by a local priest. Sam doesn’t practice religion, but was obviously raised with scripture and inspired preaching.

Faith is not exactly the issue with these neighbors, belief is, with Abi angry and frustrated about conflicting messages. Why would God let her father get cancer?

It is a subject that dances around in the novel, but, like other subjects, such as mental health and dysfunctional families, it never makes it to the forefront, except that when someone dies, all go to a church for the funeral.

The characters dance around, too, without much direction, just living day to day, in a sort of happy-place compound that is their shelter from storms.

Conflict is at a minimum, and the pain each person has to bear is made lighter by the solidarity of the neighbors. There is plenty of potential for tragedy, with Abi’s father’s cancer, an arrest for Jet. Sam’s beloved Poppy is an old preacher, and, of course, Mr. Kasir is an old man with a war injury and a son addicted to drugs.

Covington touches on the son’s crisis, but does not dwell on it, and provides a loving and devoted grandson to make Mr. Kasir’s life easier.

Nothing is resolved, there are no profound revelations.

The election brings them closer together, with Sam, who is African-American, the most nervous about the outcome.

“Once in a Blue Moon” is gentle, almost transitory, as if the author’s lens is shifting focus somewhere else, like a drone has passed overhead.

If you want a read that is not taxing, nor fraught, nor laced with burning questions, “Once in a Blue Moon” is a pleasant break.

By Susan Shinn Turner For the Salisbury Post What could be more romantic than a honeymoon in Paris? Not much,... read more