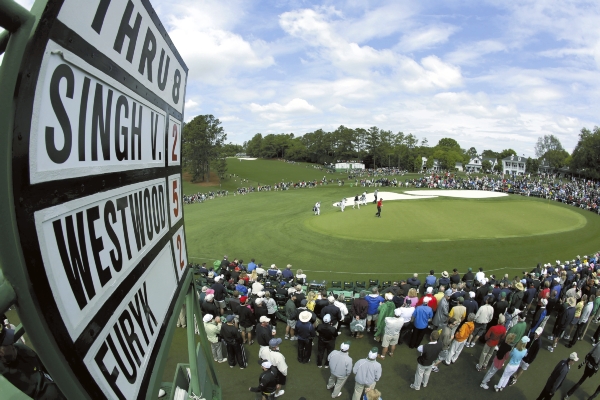 FILE- In this April 6, 2012, file photo, Lee Westwood, of England, Vijay Singh, of Fiji, and Jim Furyk walk up to the ninth green during the second round the Masters golf tournament in Augusta, Ga. If the Masters doesn't really begin until the back nine Sunday, the final place to build, or lose, momentum is the 460-yard ninth hole known as "Carolina Cherry." (AP Photo/Charlie Riedel, File)

AUGUSTA, Ga. (AP) — Jordan Spieth might have found a new way to finish the front nine at the Masters.

He’s just worried about trying it when anyone is looking.

It was during a practice round one year that Spieth reached the tee on the 460-yard ninth hole and noticed an opening in the trees left of the tee. It was large enough to consider going down the first fairway. He figures now he has tried this unconventional route a half-dozen times.

“In practice rounds, and times I’ve just been messing around, there’s a hole where you can do down 1, and it gets all the way to the flat,” Spieth said. “And then the angle into the green, it’s just tier-tier-tier.”

He said this while chopping his hand from left to right. From the ninth fairway, the tiers on the diagonal green stack front to back. Spieth figures if he can put his tee shot far enough down the first fairway, it would be a straight shot over two bunkers.

So what’s the problem?

“Obviously, if one person does it, there will be a new tree there,” Spieth said with a laugh. “Every time I’ve tried it, when I’ve been with members, they’ve said, ‘Don’t let the chairman see you.’”

The ninth hole at Augusta National is named “Carolina Cherry” and it can be a pivotal part of the Masters on Sunday. The conventional way to play the hole is to drive to the bottom of the hill, a slight dogleg to the left even as the terrain moves to the right. From there, it’s typically a short iron up the hill to a three-tiered green that slopes sharply to the front. Two deep bunkers are to the left of the green.

The contours are so severe that is not unusual to see players putt from 20 feet with their backs to the hole.

Jack Nicklaus has left his bear tracks all over the Augusta National, particularly on the back nine, on his way to win six green jackets.

Perhaps special recognition should be paid to the ninth hole. It’s the last one Nicklaus ever played in competition at the Masters. He never announced that 2005 would be his last Masters. Players started on both tees because of the rain, so Nicklaus wound up ending his incomparable career at Augusta on the ninth hole.

Strong memories of the ninth hole also include a big shot for Nicklaus.

In the final round in 1986, Nicklaus was lining up a birdie putt when he had to back off twice because of the roars coming from down the hill around the eighth green, where Tom Kite and then Seve Ballesteros each made eagle.

“I was about 12 feet. I wasn’t on the green, I was on the fringe,” Nicklaus said. “And they both holed those eagle shots and I said, ‘Let’s make some noise up here, too, guys.’ And I holed it. Off and running.”

Nicklaus shot 30 on the back nine for a 65 and at age 46 became the oldest Masters champion.

“I think the ninth hole is a relatively awkward golf hole,” Nicklaus said. “It doglegs against where the terrain goes. It’s a tee shot you want to squeeze down the left side and you take a couple of gulps as it goes down the left side because if you clip a tree, you’re dead as a door nail. If you hit a good tee shot, it’s not a very hard second shot, but then you always have to worry about slipping it off the green.”

Greg Norman knows all about that. He was still in control of the Masters in 1996 when his wedge to No. 9 wasn’t deep enough, came down off the front and some 60 yards back down into the fairway. The birdie sent Nicklaus to a stunning rally. The bogey went Norman to a staggering collapse.

And it’s where Tiger Woods nearly missed the cut at Augusta National. It was 2003, with Woods going for an unprecedented third straight Masters, when he came to No. 9 (his last hole of the second round) needing par to make the cut on the number. He sprayed his drive to the right, under a tree. He hit a waist-high shot under a branch and into the left bunker, and then blasted out 3 feet above the hole.

“That putt,” Woods said at the time, “was either going in or going off the green.”

The ninth might also be the hole that ended Nick Faldo’s career at the Masters (though his work with CBS might have had a wee bit to do with that decision).

He referred to the approach No. 9 requires as a “classic Augusta second shot.” It’s typically a downhill lie, with the ball below the player’s feet, meaning the contact must be clean. And it didn’t help when a new tee was built 30 yards back. Faldo’s last year playing the Masters was in 2006, and he couldn’t get to the bottom of the hill.

“I sat on the hill with my boy, Matthew, on the bag,” Faldo said. “I said, ‘Matthew, I can’t hit this green. I’ve got two bunkers down the left side the size of houses, so I can’t be left. I can’t be right. I can’t be short. I haven’t got a shot for this hole.’

“And that made my decision,” he said. “I stood on the ninth hole and said, ‘I haven’t got the game for this golf course anymore.’”