Unfinished: Tar Heels, Oregon try to get it right this time 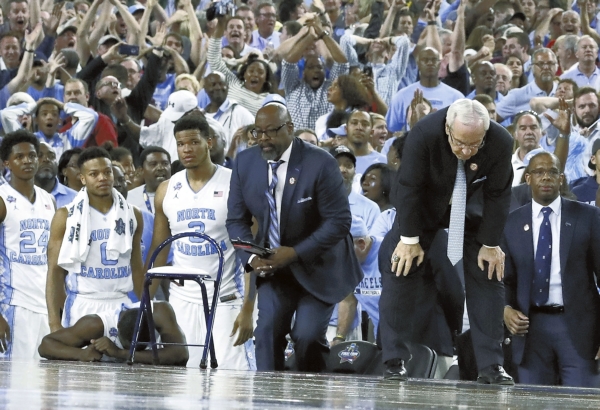 FILE - In this April 4, 2016, file photo, North Carolina head coach Roy Williams, right and his players on the bench react after the NCAA Final Four tournament college basketball championship game against Villanova, in Houston. North Carolina came one agonizing shot away from winning the title last year. Oregon had championship dreams, too, but they were doused in the Elite Eight. The teams meet in the Final Four on Saturday, two wins away from closing the deal. (AP Photo/David J. Phillip, File)

By EDDIE PELLS, AP National Writer
GLENDALE, Ariz. (AP) — Roy Williams could hear his own footsteps as he padded through the near-silent locker room, still trying to wrap his mind around a question that couldn’t be answered: What do you say to a group of players who did nothing wrong, but lost anyway?
In some form or other, that question has lingered at North Carolina all season. With a win over Oregon in the Final Four on Saturday, the Tar Heels (31-7) will be back to the title game, where, last year, Villanova unraveled their dreams with one dagger of a shot — a game-winning 3 with the buzzer sounding.
“The most inadequate feeling I’ve ever had in my life,” Williams called the aftermath of the game. “What I did is, I tried to tell them, let’s focus on using this feeling as fuel, as motivation, to work extremely hard in the offseason.”
Most of the key players from last year’s Tar Heels — among them, Joel Berry II, Isaiah Hicks and Justin Jackson — are back. They have a group-texting channel named, simply, “Redemption.”
The North Carolina players have walked the fine line this season between the natural inclination to dwell on the painful loss, and the impossible task of forgetting it.
“A dream was to get here,” Jackson said. “It wasn’t necessarily to get back here and get back what we thought we won last year.”
Oregon (33-5) had title dreams last year, too.
The Ducks were a No. 1 seed, but in an NCAA Tournament that veered off the rails, guard Dillon Brooks got upbraided by the losing coach in the Sweet 16, Duke’s Mike Krzyzewski, who lectured him in the handshake line for jacking up (and making) an uncontested 3 while the teams were running out the clock. Then, the top-seeded Ducks ran into Buddy Hield in the Elite Eight .
They looked primed for another run this season, then big man Chris Boucher went down with a torn-up knee in the Pac-12 tournament, and thoughts of Oregon repeating as a 1 seed went out the window.
Instead, the Ducks were seeded third and largely overlooked coming into this year’s tournament. But now, they’re two wins away from the team’s second championship. The first came in 1939, the first year of the tournament.
“It was stunning when we found out that day that Chris was not going to be with us,” Ducks coach Dana Altman said. “We just had each of our guys step up and try to do a little more.”
Some things to watch when the Ducks meet the Tar Heels in Saturday night’s semifinal:
MAYE DAY: Could sophomore Luke Maye be North Carolina’s new go-to guy? Maye hit the game-winner with 0.3 seconds left against Kentucky in the regional final last weekend. It marked the first time a North Carolina player made a game-winning shot in the last 10 seconds of an NCAA Tournament game since 1990 (Rick Fox vs. Oklahoma). That game-winner came two days after Maye had 16 points and 12 rebounds — his first career double-double — in a win over Butler.
HOT SHOT: Oregon’s Tyler Dorsey is shooting 65 percent (17 for 26) from 3-point range in the tournament. He said teams haven’t been stepping out to challenge his shot as much in the tournament, and that’s even more the case as he’s extended his range over the last few weeks. The key to keeping a hot hand? “Nothing to figure out, really,” he said. “I’m just getting a lot of shots. I’m probably getting more than anyone, and I’ve got the hot hand.”
REBOUNDING: One reason the Tar Heels are here: Rebounding . They average 13 more rebounds a game than their opponents, a margin unseen in Division I since Michigan State made the Final Four in 2001. It’s resulting in 17.5 second-chance points a game, more than eight more than their opponents. Ducks coach Dana Altman said limiting North Carolina’s advantage will be a “priority for everyone who is on the floor,” but one made more difficult by the absence of Boucher, the team’s second-leading rebounder.
BERRY: Berry has been battling two sprained ankles, the last of which was suffered in the Kentucky game. On Friday, he participated in North Carolina’s closed practice and said he’s feeling about 85 percent — a virtually certain sign that he’ll play. “I think I’ll be effective,” he said. “It’s a matter of just getting into the game and not worrying about it. Once I do that, it will be good.”
___
For more AP college basketball coverage: http://collegebasketball.ap.org and http://twitter.com/AP_Top 25