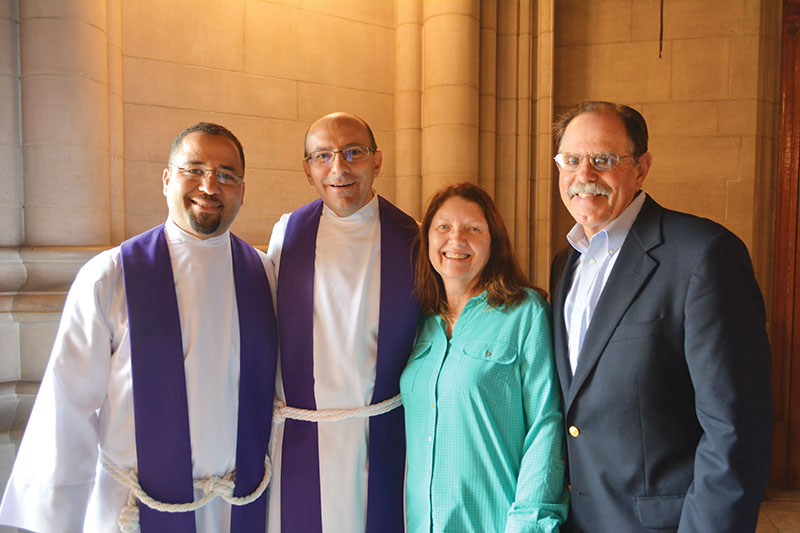 Dr. Mitri Raheb and the Rev. Dr. Luke Powery with Mike and B.J. Connor at Duke Chapel on March 26 in Durham. Mike Connor leaves April 9 to spend three months in The Holy Land as an ecumenical accompanist with World Council of Churches.

Don’t expect Dr. Mitri Raheb to paint a rosy picture of the current situation in Bethlehem. Raheb, who was born there, has lived under occupation for 50 of his 55 years. He’s long since given up convincing his fellow Christians — an ever-shrinking group in The Holy Land — to stay.

Raheb, one of the major peace advocates in that troubled region of the world, says he’s a “prisoner of hope.” Indeed, the tagline for Bright Stars of Bethlehem, the American-based non-profit organization that supports outreach ministries in Bethlehem, is “Hope is what we do.”

In turn, Raheb continues to preach a gospel of hope, looking for — and finding — those rare silver linings in dark times. Raheb was in North Carolina last week, serving as the keynote speaker for “Dare to Dream: An Ecumenical Conference on Peace and Justice in the Middle East,” March 24-26, with events throughout the Triangle. He also spoke at Union Theological Seminary in Charlotte, and met with several supporting churches in that city. That’s also where Bright Stars of Bethlehem held its board meeting.

On March 24, Bishop Tim Smith introduced Raheb as keynote speaker at White Memorial Presbyterian Church in Raleigh. It was the first time that Smith, bishop for the N.C. Synod since 2015, spent time with Raheb.

“His presentation was very helpful — clear in his message of hope and not primarily critical of Israel’s policies,” Smith said later. “He simply lifted up the plight of his people, the Palestinians, and how unfairly they have recently been treated in Bethlehem. I hope the result of his visit will be that Christians here in the states will have a more balanced perspective on the complicated Israeli/Palestinian dynamics in Palestine and will be able to draw a distinction between the biblical people of faith, the Israelites (who received the promised land) and the current state of Israel.

“I would also hope that the U.S., and especially Christians (like the ELCA and PCUSA are doing) will advocate for holding accountable Israel in their illegal occupation of and oppression of Palestine.”

Raheb is the author of 17 books. His newest book is “The Cross in Contexts: Suffering and Redemption in Palestine.” It is available on Amazon beginning April 20.

In his remarks at White Memorial, Raheb said that 2017 marked the 50th anniversary of the occupation of Bethlehem. “Your whole life is marked by occupation.”

Raheb remembered giving up a high school graduation party, because a classmate had been imprisoned for protesting peacefully. He and his wife never had a wedding reception when they married in 1989. A year later, he held his three-month-old daughter as the young family faced the threat of poisonous gas attacks from Saddam Hussein.

“It’s hard to start over so many times,” Raheb admitted. “Occupation touches lives in horrible ways.”

He said he always thought there would be peace in his lifetime, but now wonders if his two grown daughters will experience it.

“It’s easy to run away,” Raheb noted, “but this is where the Lord wants us to be. Jesus was born in an occupied country. My wife and I remain, and we may not experience peace in our lifetime. But we want to work hard so that hopefully the next generation will experience it.”

Later in the weekend, he added, “I have to admit it’s becoming more and more difficult to convince people to stay. Better to be a living witness, as someone who could leave but does not. I stopped talking about it some time ago. It’s not where life is easy, but it is where we are needed.”

Raheb always encourages his audiences to be peacemakers, not “peace talkers.” He told the stories of three students at Dar Al-Kalima, and how their lives have been changed.

He invited his audiences to Bethlehem to “come and see.”

“Go there,” Raheb said. “Meet the people. See the hopes and fears of all the years that are still there in the little town of Bethlehem.”

On March 25, Raheb was part of an interfaith discussion at Church of the Reconciliation in Chapel Hill. Appearing with him were Sandra Korn, a representative of Jewish Voice for Peace; Faisal Khan, an American Muslim who is founder and director of the Carolina Peace Center; and the Rev. Mark Davidson, the church’s pastor.

All of the speakers discussed the concept of creative resistance — again, a peaceful means of protest using the arts.

“As long as there is occupation,” Raheb said, “there will be resistance. If we are dealing with a marathon in Bethlehem, we need to teach our people how to breathe, not to lose hope or give up.”

“Are we speaking the truth?” Khan asked. “Are we moving forward with peaceful means? My question is, what are you going to do about it? You can do realistic, simple things. You can participate in interfaith discussions, you can become involved in the civic process and the political process. We have to reach out to everybody, in the best possible manner we can.”

“It put a human face on all of this,” said Linda Hull, a member of St. John’s who attended the event with husband Roger.

“It broadened my awareness to hear perspectives from a Jewish American and a Muslim American about tensions within their own faith communities,” he said. “The struggles are not only in the Middle East, but how we view our brothers and sisters within our own faiths. Mitri said he is not for a state that excludes ethnic groups. Frankly, it was good for us to hear. I came away with some truths and perspectives that are universal.”

On March 26, Raheb was guest pastor at Duke Chapel in Durham. His sermon text was based on Mark 15:27-34, when Jesus was crucified between two robbers.

“The Bible could not have come from any other place but Palestine,” he said. He often jokes that “The Bible did not come from the Bible Belt.”

Since Biblical times, the Holy Land has been under occupation, Raheb said. “The question of ‘God, where are you?’ is a 3,000-year-old lament, that echoes through the Bible. We don’t question the existence of God, but we wonder, why isn’t he moving? He seems silent.”

For more information about Bright Stars of Bethlehem, visit www.brightstarsbethlehem.org