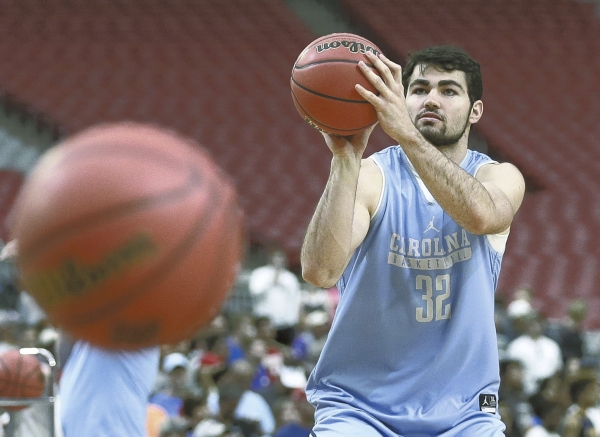 The Tar Heels’ Luke Maye shoots during the practice session. Maye’s grandfather, Jerry, was a baseball pitcher at Catawba during in 1962-65 (See story below). South Carolina plays Gonzaga in the first game at 6:09. AP Photo/David J. Phillip

Talk about a family tradition.

The sons: Luke Maye, UNC basketball player and current darling of Tar Heel fans after last Sunday’s game-winning jumper that beat Kentucky and put his team into tonight’s Final Four. The 6-8, 235-pounder has had a sophomore season to remember.

Luke’s brother, Cole, is a freshman lefty pitcher at the University of Florida. Cole, who is 6-7, 220 pounds, graduated from Hough High School in December so he could get an early start with the Gators.

Another brother, Beau, plays basketball at Hough and is a 15-year-old freshman who stands 6-8 and weights 230 pounds.

And yet another brother, Drake, is 6-2 and in the 8th grade. He’s still deciding which sport is his favorite plays football, basketball and baseball.

The father: Mark Maye, a two-year starter at quarterback for the Tar Heels in 1986-87, passing for over 3,400 yards and 20 touchdowns. He led Carolina to 12 victories and an appearance in the Aloha Bowl in 1986.

The grandfather: Jerry Maye, a fire-balling left-handed pitcher for Catawba College for four seasons (1962-65). He still holds school records for strikeouts in a game (18), innings pitched in a season (111.2) and complete games in a season (10) and career (33). Maye had 318 career strikeouts, the record until 2013, and won 27 games. He was inducted into the Catawba Sports Hall of Fame in 1986.

The great-grandfather: For the record, according to Jerry, his father, Harold, played baseball for Charlotte in the highly competitive “mill leagues” of the late 1930s and 1940s.

I was introduced to Jerry Maye many years ago by Catawba legends Harvey Stratton and Dick Williams. Stratton coached Maye for three of his baseball seasons at Catawba and Williams knew Jerry from high school days in Charlotte — Jerry at Garinger and Dick at East Mecklenburg.

Williams, who died in 1999, moved to Salisbury during his later years and actually coached baseball at Catawba in 1989-94. He made himself known in town and liked to greet people with the phrase, “you’re the last of the good guys.”

Well, I don’t know if Jerry Maye is the last of the good guys but he is certainly one of them. The successes of his son and grandsons have not changed him at all.

“We are blessed,” said Jerry on Wednesday, from his home in Conover. “A friend of mine called me and said ‘I know you’re proud’ (of Luke) and I said, proud is not the word — blessed and thankful.

“I’ve been around sports long enough to know that it’s all from the good Lord above and it can be taken away at any time, too, so you just need to be thankful,” continued the ol’ lefty, now 74.

Jerry and his wife, Rita, attended most of Carolina’s home games this season and went to the first two NCAA Tournament games in Greenville, S.C.

The couple was not in Memphis last Sunday, but on their couch in Conover. They got a thrill of a lifetime when grandson Luke drained that 19-footer with 0.3 seconds left.

“I will say that I was sitting on the couch — but I came off the couch when he went up with the shot,” laughed Jerry. “I mean, gah-lee, you had to be excited about that.”

What did he and Rita think when a Kentucky 3-pointer tied the game at 73-73 just before Luke’s shot?

“Well, Carolina got the ball in bounds so quickly, you didn’t have time to think. Luke was kind of trailing Theo (Pinson) on the dribble and Theo kind of got cut off by his defender and he dumped it off to Luke and … thank the Lord, it went in!”

Jerry was just as impressed with Luke’s play just before the shot heard ‘round the Carolinas.

“I thought that Luke made a nice play on that jump-ball, tie-up play, getting a possession, and then, the in-bounds to his roommate Justin (Jackson) … Luke hit him with that nice, long pass.

“Luke plays hard, and he’s a good boy,” continued Jerry. “He called me Monday afternoon after he got out of class. I said, ‘Luke, this is a perfect example of how hard work can pay off in sports. He said, I agree with you granddad, but it’s got to continue.’ That’s the kind of kid he is.”

It’s well-documented that Luke was a preferred walk-on for UNC after his career at Hough. But that was his choice. According to Jerry, Luke had offers from a lot of schools, including several in the ACC, but he was pretty much destined for Chapel Hill.

“Luke grew up in a UNC household and he always wanted to go to Carolina,” remembers Jerry. “Coach Williams told him on a home visit that at the time, he could only offer Luke a preferred walk-on, but if someone leaves, you’ve got one. Coach Williams honored his word and when a scholarship came open, he called Luke up and said, ‘I’ve got your scholarship.’”

Jerry had a similar story when he came out of high school in 1961. He was selected to the N.C. East-West All-Star baseball game and all of the college coaches were there in Greenville.

Jerry pitched well enough to get partial scholarship offers at Carolina and Wake Forest. But he received a better offer from the school in Salisbury.

“Coach Stratton said ‘if you come to Catawba, we’ll cover everything,’” recalls Jerry. “So, I went to Catawba on scholarship and I didn’t regret it. I had a wonderful experience and career. I met my wife, Rita, there and made some lifelong friends … and was fortunate enough to play a little minor league baseball.”

Jerry signed with the Minnesota Twins out of college and in his first professional season at St. Cloud in the Northern League, the lefty was 8-3 with a 1.94 ERA. Closer to home in 1966, at Thomasville, Jerry was 5-0 before he was hit by a pitch while trying to bunt.

The pitched ball hit him on the “point” of his left shoulder and he developed an acute case of tendinitis. Jerry went 2-6 during the rest of that season and figured that he was done.

“I probably could have gone back to spring training the next year, but I didn’t,” said Jerry. “I went to work for Proctor and Gamble in sales for the next 32 years, a great company to work for. I was already married by then and Mark was a year or two old. I thought, ‘hey, I’ve got my degree and I probably need to get on with life.’”

Mark Maye and his wife, Aimee, along with the two youngest sons, are in Phoenix for the Final Four. Jerry and Rita will be watching tonight from Conover.

“We sure hope that Carolina matches up well with Oregon,” Jerry said. “Luke told me that the team went out there on Tuesday, to get acclimated to everything. We’ll be pulling for ‘em.”