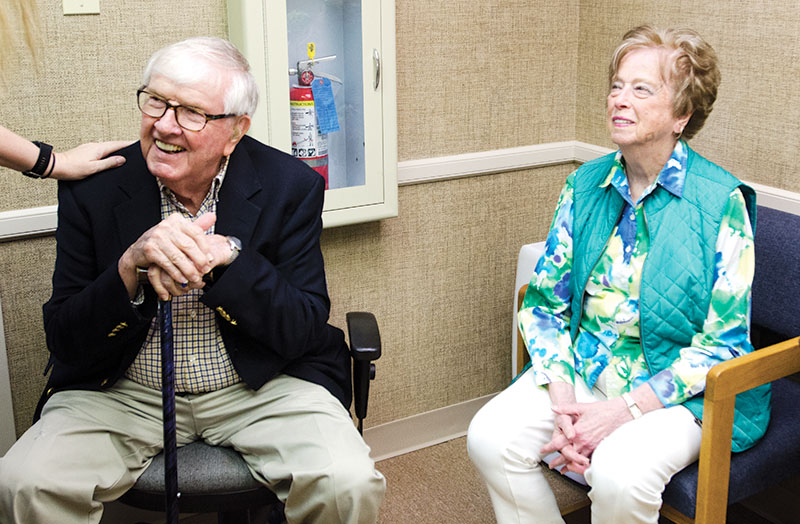 KRISTI CRAVEN/ SALISBURY POST Dr. Bobby Lomax, left, and his wife Betty smile as they greet people who have come to celebrate Dr. Lomax's many years of service to the Community Care Clinic and Dedicate the Dental Lobby to them as a thank you in Salisbury on March 31, 2017.

SALISBURY — You might say it was a lobby for the best kind of lobbyists.

Friday the Community Care Clinic, known for free dental care provided to the needy by volunteer dentists, dedicated the clinic’s lobby to Dr. Bobby Lomax and his wife, Betty.

Always generous of their time, talents and spirit, the Lomaxes could be called lobbyists for humankind.

Dr. Bob Lewis, retired senior pastor of First Presbyterian Church, said anytime there was a real need at the church, the understanding was not to go public with it. Instead, tell Bobby Lomax, and he would take care of it.

Others at the dental lobby dedication Friday talked of how the Lomaxes often help friends, colleagues or complete strangers they read about in the paper.

“Whether reduced or free dental care, helping a family who got burned out or simply loaning a tool, they constantly look for ways to help people either emotionally or financially,” fellow dentist Dr. Frank Eason said.

“All of us know their acts of kindness, but only Bobby and Betty know all of the kind deeds they have done over the years and they did it ‘the Lomax way,'”

Friday’s gathering for the dedication was filled with a Who’s Who of Salisbury dentistry. Dr. David Mayberry remembered how Bobby Lomax allowed him to use his office to treat patients when he first arrived in Salisbury.

Teen Aron, wife of Dr. Brandon Aron, said Bobby Lomax made her husband feel at home and “showed him the ropes” when he was starting his practice 14 years ago. The Lomaxes absorbed the couple warmly when Teen joined Aron a year later.

Dentist after dentist in Salisbury tells the same kinds of stories. They make up a close fraternity, and Lomax had a lot to do with that.

“I will always remember Betty being a gracious hostess to the Rowan Dental Society at her home on Wiltshire Road,” Eason said. “And like Bobby, going out of her way to welcome new dentists to Salisbury.”

Eason said the Lomaxes display “off-the-chart character and generosity” and are one of Salisbury’s premier couples.

Over the years, Eason has been Bobby’s friend, golfing partner and fellow Session member at First Presbyterian Church.

Eason referred to Lomax as the Billy Graham of Salisbury, “which I believe is a tribute to Billy Graham.”

Executive Director Krista Woolly said Bobby Lomax was seeing people and providing free care to needy patients before there even was a dental component of the Community Care Clinic.

Four years ago, at age 85, Lomax retired as a volunteer dentist at the Community Care Clinic but not before putting in more than 225 volunteer hours at the clinic, located off Mocksville Avenue.

“That’s something to be celebrated,” said Debbie Hill, longtime dental assistant and dental coordinator at the clinic.

The Community Care Clinic celebrated its 20th anniversary last October, and it has offered the dental clinic for 17 years.

A native of Churchland, Bobby Lomax graduated from Catawba College in 1956 and earned his dentistry degree from Medical College of Virginia in Richmond. He met Betty when both had summer jobs at the Medical College.

The couple married in 1959. Bobby first worked as a dentist at the VA Medical Center in Salisbury and opened his own practice in the Weaver Building by 1962. A decade later, he joined three other partners in building the two-story professional building at 2440 Statesville Blvd., from where he continued in practice 20 more years before selling his practice to Dr. Don Fortner.

Lomax had a great chair-side manner and gained a reputation for being available for any dental emergency, any day or night of the week.

He retired without really retiring. Besides helping at the Community Care Clinic, Lomax kept seeing a few patients — at their request — at Fortner’s office every week.

Fortner eventually moved to a Manning Park office off Jake Alexander Boulevard and Lomax, in his quiet way, went with him.

Betty Lomax had a strong background in education, having taught 12 years in Richmond schools. In Salisbury, she became an assistant professor in physical education for many years at Catawba College.

The Post wrote a feature on Bobby Lomax in 2012, when he was marking his 50th year as a Salisbury dentist. Lomax shared one of his favorite stories then about the time he asked a little girl whether she had been brushing her teeth regularly.

The girl said she was and added she brushed her dog’s teeth, too.

A bit alarmed, Lomax asked whether she was using her toothbrush on the dog.

It remains a good story for any dentist — or lobbyist.