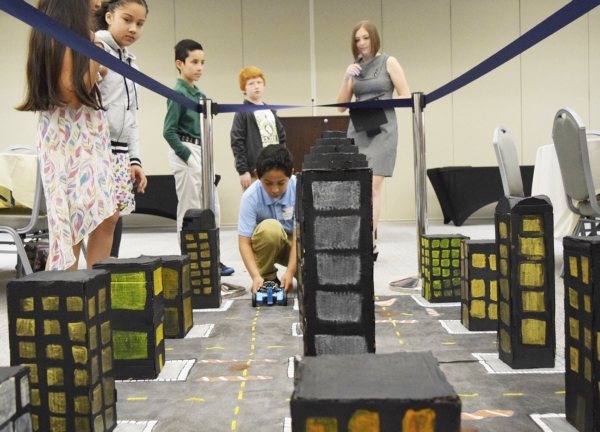 The robotics club from Fred L. Wilson Elementary School demonstrate robotics and coding at the Kannapolis Education Foundation's 2017 fundraiser breakfast. Two positions on the Kannapolis School Board are up for election this year. Rebecca Rider/Salisbury Post

KANNAPOLIS — Last year the Kannapolis Education Foundation raised $25,000 at its annual breakfast — money that was used to jumpstart a STEM academy at A.L. Brown High School and expand STEM offerings at the elementary level.

This year the foundation hopes to complete the circle by funding STEM and robotics curriculums and offerings at Kannapolis Middle School.

Students, teachers and district representatives spoke at the early morning breakfast, held Friday at Kannapolis City Hall, and highlighted the importance of engineering, robotics and STEM education in a rapidly changing world.

“So much has changed in the last few decades,” Kristina Cook, foundation board of directors chair, said.

She asked audience members to remember what life was like before automated gas pumps were invented — a device that required robotics and coding. And while it swept out the role of gas station attendants, it created jobs building pumps, and allowed gas stations to expand into mini-marts; which, in turn, created more jobs.

“So we don’t need to be afraid of automation,” she said. “We need to embrace it. We need to be prepared for it.”

And part of that involves training students, and teachers, in engineering and robotics — skills that are quickly becoming essential and indispensable. And that requires real world training, applications and problems.

Joel Bonasera from Discovery Place in Charlotte spoke about professional development the organization recently conducted with teachers. The science museum also provided classrooms with robotics supplies that were authentic to what engineers might use in the workplace.

“If you give kids toys, they’ll play with toys,” he said. “We’re not looking to play with toys. This is real work with real robotics.”

Students from the Fred L. Wilson robotics team shared why they believed it was important to begin learning robotics at a young age. Robotics and engineering helps teach teamwork, and helps students learn to keep trying until they get it right. Starting at a younger age also means students can take advantage of more learning opportunities.

Jason Stegall, a career and technical education teacher at A.L. Brown, spent time talking about the school’s new STEM academy. The program launched in August, funded by last year’s foundation breakfast, and was open to 23 students. Stegall said all the slots were filled — with half of the incoming freshman being women.

The program has seen success — as has the school’s Beta club, which this year placed first in the state in a robotics competition.

Superintendent Dr. “Chip” Buckwell and Cook said they wanted to make that focus on robotics and engineering across all grades. In August, Kannapolis Middle School will open its new wing to house sixth grade, and Kannapolis Intermediate School will close down. When those sixth graders arrive at their new school, Buckwell said, he wanted them to have the same chance to tinker, work and learn that they had in elementary school, and would have in high school.

“We’ve got to give every kid that we can possibly give that opportunity,” he said.

This year’s Friend of Education Award was presented to Carolinas Health Care System, NorthEast. Those interested in donating to the foundation can do so online at KEFgives.org