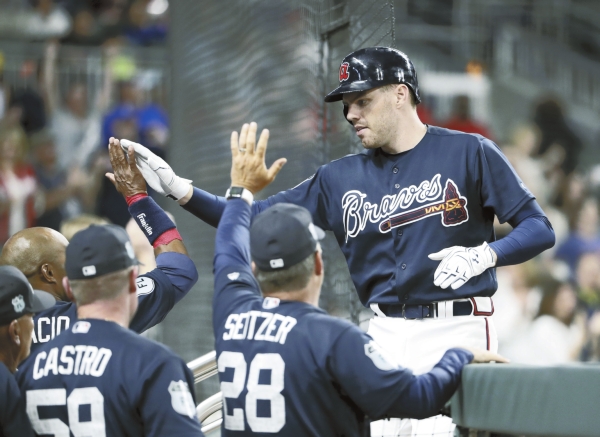 The 43-year-old Colon got in a final tuneup for his 20th big league season in Atlanta’s first game at SunTrust Park, going three innings as the Braves opened their new stadium with an 8-5 exhibition victory over the New York Yankees on Friday night.

“I’m very happy to have gotten that opportunity,” Colon said through an interpreter. “I’m happy because I feel 100 percent. I feel great physically and mentally. So I’m ready to go.”

New York’s Greg Bird hit the first homer in the new park, a two-run shot off Colon in the third. It was Bird’s eighth homer of the spring, tied with Washington’s Bryce Harper for most in the majors, and pushed the first baseman’s average to .451.

Freddie Freeman countered for the Braves in the bottom half with a three-run homer over the high brick wall in right-center. Jace Peterson had the big hit in a five-run sixth, clearing the bases with a three-run double that dropped between three New York players.

The exhibition, before a crowd of 21,392, wrapped up the spring for both teams and served as a soft opening for the new stadium, which still has some kinks to work out. The lights flickered a couple of times, the center field scoreboard went out briefly and the press elevator malfunctioned.

Colon, who allowed four hits with two strikeouts, was followed to the mound by 42-year-old R.A. Dickey. They will make Atlanta the first team since the 1990 Texas Rangers to have two 40-year-old pitchers in the starting rotation.

Manager Joe Girardi was perturbed about the pitch that Pineda served up to Freeman with two outs in the third after giving up a single to Dansby Swanson.

Yankees: Masahiro Tanaka will make his third straight opening day start when the Yankees start the season at the Tampa Bay Rays on Sunday. Tanaka went 14-4 with a 3.07 ERA in 31 starts last season, setting a career high for wins.

Braves: Julio Teheran will pitch for the Braves when they open the season Monday in New York against the Mets. The right-handed is one of only two holdovers from the 2016 starting staff.