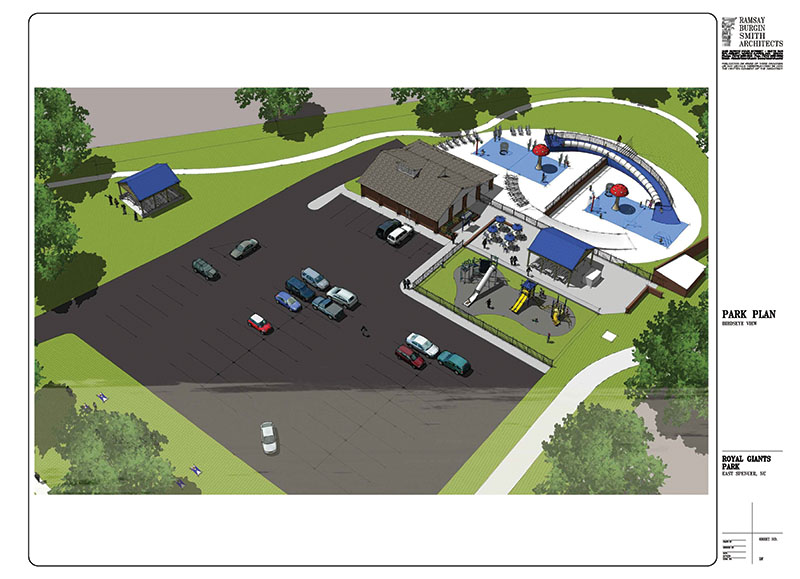 EAST SPENCER — The town is hoping the community will provide feedback about its Phase I plans for Royal Giants Park with a letter, social media comments or in person at town hall. The town has been working since 2012 on a plan of redeveloping the park, located off Long and Andrews streets.

The town began in 2012 with an assessment questionnaire from the community and a land survey conducted by Shulenberger Surveying. In 2014, volunteers made improvements including building a picnic shelter. There will be at least four phases, but the town has focused its efforts on completing phase I. The town has hired Ramsay, Burgin, Smith Architects for engineering work of Phase I.

Phase I of the redevelopment master plan will include a splash park, a picnic shelter, cornhole toss courts, renovations to the restroom/shelter, basketball courts and playground. The improvements also include entrance signs and walking trails. Part of the plan includes creating a new access road into the park since the current entrance at Robinson Road cuts through the middle of the park.

The town held an informal walk-in in late March where residents had an opportunity to see and discuss the renovation plans. Interim Town Administrator F.E. Isenhour has said there are few changes to the initial plans.

Any comments can be made in person at town hall, 105 S. Long St., or through the town’s Facebook social media page that can be found by searching Town East Spencer.