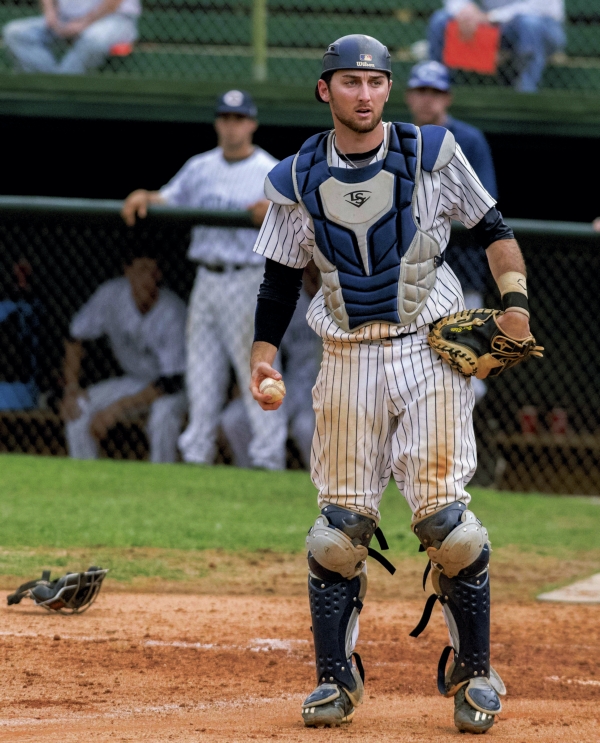 The lyrics of the 1977 song “Black Betty” from forgotten rock band — Ram Jam — don’t make a lot of sense, but the drumming is thunderous and the rowdy guitar riffs are loud enough to shake the bleachers.

“Black Betty” is back on the charts at Newman Park. Catawba hitters have their walk-up music. Catawba closer Bryan Blanton has his walk-out music.  “Black Betty” on the P.A. means a call to the bullpen has been answered by Blanton, and he’s ready to save another Catawba victory.

“(Catawba starter) Russ Weiker picked the song out for me last year,” explained Blanton, a junior right-hander from Albemarle.

Blanton (6 feet, 175 pounds) looks like an average guy, but he has an above-average fastball and a nasty slider. He saved a 7-6 victory in the first game of Catawba’s Saturday doubleheader with the Augusta Jaguars (14-17). It was his eighth save of the season, the 19th of his career.

Blanton had to do a little extra. Normally he enters  in the ninth inning, but on Saturday “Black Betty” resounded through the park  earlier. Blanton was summoned to get the third out in the eighth with two men on base. It looked like lefty reliever Connor Johnson was going to have a peaceful eighth, but a two-out bouncer up the middle and a careful walk left no margin for error. Head coach Jim Gantt tapped his right forearm with his left hand, signaling for Blanton.

Blanton won a tense battle for that last out in the eighth, the biggest of the game. With a handful of scouts in the stands pointing radar guns, Blanton had two good fastballs fouled off by No. 2 hitter Tyler Roberts. Then he got the out he was seeking on a 2-and-2 slider.

Blanton and catcher Zac Almond, both Stanly County products, form a good team. They can be sneaky.

“We knew he was looking for the fastball,” Blanton said. “I shook off Zac like I wanted to throw another fastball. Then we got him to pop up a slider.”

Weiker started and threw well, but Catawba didn’t do anything to help him. Weiker appeared to have a strikeout that would’ve ended the top of the sixth with the Indians down 3-0, but he didn’t get the call.  One walk, one throwing error off a helmet and one line drive just out of the reach of diving center fielder Malachi Hanes later, the Indians trailed 6-0, and it looked bad for the home team.

“Sometimes you just have to endure,” Hanes said. “This was a game where we showed our resilience.”

Jeremy Simpson and Kyle Smith whacked singles to get the bottom of the tide-turning bottom of the sixth started. Chance Bowden’s run-scoring single to right put the Indians on the board.

“Their pitcher  (Tristan Jones) had us off-balance for five innings,” Bowden said. “But the coaches did a good job of keeping us in the game and telling us we could still battle back. This was a good win for us. It said a lot about us.”

Hanes followed Bowden and he also came through. The lefty slashed a two-run triple into the right-field corner to chase home two runs and make it 6-3.

“Their pitcher had a very good change-up and he was throwing a lot of them,” Hanes said. “He got a strike on me with a change-up, but then he threw another one when I was looking for it.”

Later in the inning, Bryce Fowler hit into a force-out that scored Hanes. Now the deficit was 6-4, with three innings left. Plenty of time.

“Mentally, I’d started preparing to pitch,” Blanton said. “If we ever got the lead, I was going to be ready to go.”

Johnson mowed down the Jaguars in the seventh to keep momentum on Catawba’s side. He’s made an adjustment in recent weeks, elevating his arm slot, and he’s been pitching more like the guy who was absolutely unhittable for East Rowan in high school.

Catawba had been 0-9 this season when trailing after six innings, but this would be a breakthrough game in that regard. In the bottom of the seventh, Almond, who had been flirting with the warning track, pounded one over the wall in center, his 10th  homer of the season, to make it a 6-5 game.

The steady Smith singled again to set the stage for Bowden, and Bowden crunched one. His sixth homer exited the park in center field, and Catawba, which had looked bewildered 30 minutes earlier, suddenly had a 7-6 lead.

When Johnson needed assistance in the eighth, Blanton provided it.

“The coaches brought Blanton in at a great time, for the right matchup against a good hitter,” Hanes said.

Blanton got two outs quickly in the ninth. After a walk, he got the last one, firing a fastball toward the outside corner and getting a fly ball to right field for save No. 8.

NOTES: Catawba (24-9) romped in the seven-inning second game, 11-2, behind another homer and four RBIs by Almond. Luke Setzer and Cameron Morrison drove in two runs each. Starting pitcher Hunter Shepherd (5-0) pitched four strong innings and was credited with the win. … The teams will finish the series at Newman today at 1 p.m.

Gamecocks: What’s it like on receiving end of Frank…