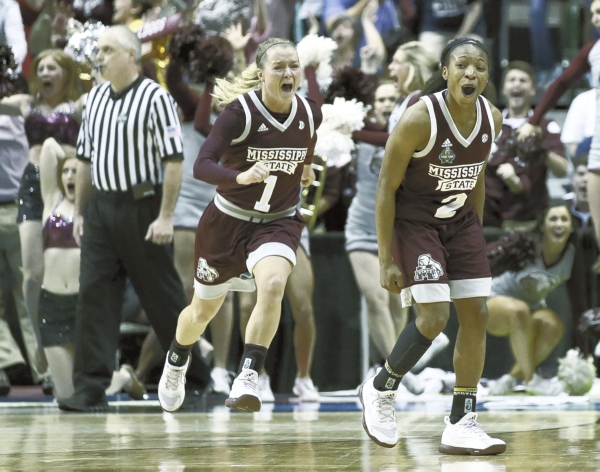 William hit a 15-footer to cap it, moments after a replay review awarded UConn two free throws for a flagrant 1 foul call that tied the game with 26.6 seconds left.

The Bulldogs (34-4) will play South Carolina for the national championship Sunday night in a matchup of two SEC teams.

Mississippi State (33-5) and UConn met in the Sweet 16 last season and the Huskies won by 60 points — the most-lopsided win in regional semifinals history. All season long the Bulldogs had that humiliating loss on their minds.

Now they’ve erased that defeat, beating UConn (36-1) — which had won the last four national championships — on the grandest stage in one of the sport’s greatest games.

UConn coach Geno Auriemma had a wry smile on his face after the final shot. There wasn’t much else he could do, another title suddenly beyond his grasp.

Mississippi State led 64-62 before a replay review gave Katie Lou Samuelson the two free throws that tied the game. After a UConn turnover, William held the ball at the top of the key before dribbling to her right and pulling up for the shot, with the ball in the air when the buzzer sounded.

DALLAS (AP) — South Carolina was able to speed up the tempo after halftime, A’ja Wilson managed a double-double even while almost constantly surrounded by defenders and Dawn Staley finally got a win against Tara VanDerveer.

With all that, the Gamecocks are going to their first national championship after beating Stanford 62-53 Friday night in the women’s national semifinals. The Cardinal led early, but struggled after star Karlie Samuelson sprained her ankle.

“I can’t even put into words the feeling that I have right now. This is a very special team,” said Wilson, who had 13 points and 19 rebounds. “I feel like we’ve earned this spot that we’re in now. We know that we’re not done. But just the feeling of just making history at your school is just something really special.”

Allisha Gray scored 18 points for the Gamecocks (32-4), who lost in the semifinal of their only other Final Four appearance two years ago.

Down 29-20 at halftime, South Carolina went ahead to stay with 13 straight points in the third quarter.

Stanford (32-6) took a big hit when Samuelson hurt her right ankle with about 4 1/2 minutes before halftime, after the Cardinal had taken an eight-point lead with a 13-1 run.

“She’s really been the glue to our team all year. She talks, she makes big shots. If someone told before the game she won’t score, I’d say we’re in trouble. … Psychologically and physically, it was a challenge.”

Samuelson was injured when she was making a move toward the basket, and stepped on the foot of South Carolina guard Bianca Cuevas-Moore. Samuelson’s right foot then slid onto the floor before twisting awkwardly. The senior guard grabbed near her ankle with both hands after falling down.

Two teammates came off the bench to carry Samuelson off the floor. She returned for the first 73 seconds after halftime, and got back in several times after that without making much of an impact.

“It hurt really bad when it happened,” said Samuelson, who was scoreless in 25 minutes. “I sprained my ankle and we just didn’t get the win.”

South Carolina went ahead 35-33 when Wilson, with defenders around her like most of the night, found Cuevas-Moore open for a 3-pointer that she hit from right in front her teammates on the bench during that big run.

Stanford missed three shots on its next possession, and South Carolina quickly extended the lead on freshman Tyasha Harris’ one-handed bullet pass to Doniyah Cline, who was open under the basket for a layup.

That was the only assist for Harris, who finished with 10 points.

“She was shocked and amazed just like us,” Harris said of Staley. “We just made history and she’d never done it before.”

STALEY VS TARA: Staley played for VanDerveer on the U.S. women’s team that won the 1996 Olympic gold medal. Staley had been 0-5 as a coach against her. “You’d think at some point the law of averages should play out,” she said, smiling. Staley also made three consecutive Final Four appearances as a player for Virginia from 1990-92. Two of those included semifinal losses to VanDerveer and the Cardinal on way to their only national titles (1990, 1992).

BEING SURROUNDED: “Of course, it was very frustrating. It was very tough to remain tough. But it was something I’ve seen before in the SEC,” Wilson said of all the defenders around her.

Stanford: The Cardinal, who were down by nine points in the fourth quarter, couldn’t pull off another comeback. They had trailed by at least seven points in six games it has come back to win this season. That includes five of their previous six games, all in the Pac-12 and NCAA Tournaments. They were down by 16 points after halftime in the regional final game against Notre Dame.

South Carolina: The victory kept up a big run by the South Carolina basketball teams. The men’s team takes on Gonzaga in the Final Four on Saturday.